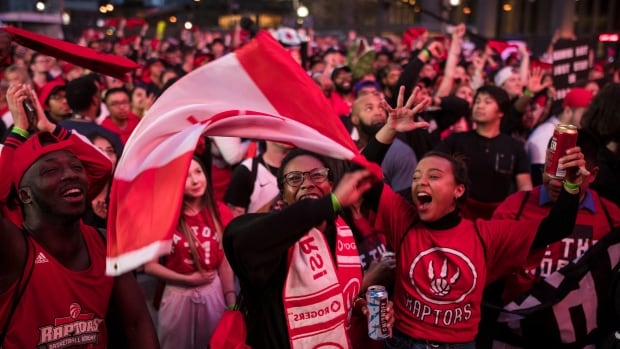 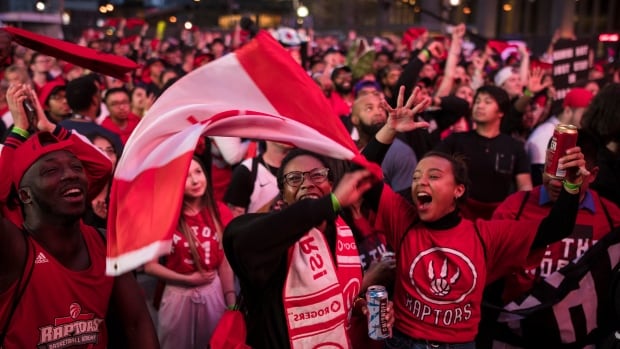 Cities and towns across Ontario are trying to re-create the energy and exhiliration of Jurassic Park in downtown Toronto. (Tijana Martin/The Canadian Press)

Have the Toronto Raptors ascended to become Canada’s team?

If you count yourself among the doubtful, take a look at all the Jurassic Park spin-offs popping up.

Maple Leafs Sports and Entertainment, the corporation that owns the Raptors, says 36 cities and towns outside of Toronto have been approved to host official public viewing parties. The list is long and varied and includes both big urban centres and rural communities.

Outside of Ontario, however, only Halifax has MLSE sanctioned events so far. Canadians in cities like Vancouver, Calgary and Tuktoyaktuk, N.W.T., have been holding informal gatherings in basements, bars and other venues.

We the North, indeed.

Some 20,000 fans watched the Raptors take down the Golden State Warriors in Game 1 of the NBA Finals at Jurassic Park West in Mississauga, Ont., alone. Thousands more watched the game on big screens in neighbouring Brampton.

“Not that it’s a competition, but I think we had more people than in downtown Toronto,” said Mississauga Mayor Bonnie Crombie.

“And we have capacity for up to 30,000, so we’re very hopeful now that the public is aware that we’ll be hosting Game 2 than even more people will come.”

For fans looking to revel in the energy and excitement of Jurassic Park — an outdoor square located at the entrance to Scotiabank Arena with enough room for about 5,000 people — events a little closer to home mean they can skip the long lines and infamous Toronto traffic.

Before Game 1 on Thursday night, a crowd started forming in Jurassic Park before dawn. Fans were lined up for several city blocks just to get a spot with a good view of the action.

They couldn’t get into the stadium for Game 1 of the NBA Finals, so these die-hard Toronto Raptors fans lined up around it hours before tipoff for a chance to cheer on their team in the fan zone known as Jurassic Park. Reporter Greg Ross shows you how big the crowd is. 7:57

Westward down Highway 401 in Burlington, Ont., about 2,000 people packed the city’s civic square to cheer on the Raptors. Officials were forced to put a last-minute road closure in place to manage the deluge of fans heading to … (drum roll please) … “Burassic Park.”

“We had a sense that the community really wanted to participate but lots of people couldn’t get to Jurassic Park in Toronto,” said Denise Beard, Burlington’s community development manager, who expects more than double that turnout on Sunday night for Game 2.

“This is an epic moment in sport for Canadians and we really need to embrace it and celebrate it and share it with the community,” she continued.

Farther from Toronto, smaller towns are also getting in on the basketball buzz.

About 150 people turned out to Jurassic Park North to watch Game 1 on a projector screen in downtown Midland, Ont., on the shores of Lake Huron about 125 kilometres from Toronto.

Randy Fee, Midland’s communications co-ordinator, said there’s value in being able to relish in the excitement of the playoffs in your hometown.

“Having it closer to home, even though its on a smaller scale, is a big part of the enjoyment,” he told CBC News.

“It’s just a really great way of bringing everyone together.”

Christa Lowry, mayor of Mississippi Mills, Ont., near Ottawa, echoed that sentiment. The town of 13,500 includes the community of Almonte, where James Naismith was born. Naismith is credited with inventing the game of basketball in 1891. A bronze statue of Naismith, complete with basketball and peach basket, adorns the downtown of Almonte.

Lowry said it was important to host a viewing party given the community’s deep connection to the game in Canada.

“We’re a long-time basketball town and we wanted to take the opportunity to share in basketball’s Canadian roots,” she said, adding that the excitement around the Raptors feels a lot like when the Toronto Blue Jays won two Major League Baseball pennants in the early 1990s.

“I don’t think it matters what part of the country you’re in. We’re all wrapped up in it and that’s a big part of the fun,” Lowry says.

Along with viewing parties around Canada, Raptors fever has gone global. CBC News previously spoke to fans who had travelled from as far as Brisbane, Australia and Hong Kong for Game 1.

Watch as Raptors fans support the team from a far:

Oh, the places you’ll go for the Raptors. Fans travelled from as far away as Australia and Hong Kong to witness Game 1 of the NBA Finals. 1:00

And fans in places like Ethiopia, Bahrain and Italy were posting messages of support throughout the weekend on social media.

No matter where fans are watching, said Crombie, the Raptors playoff run is chance to witness history with your community.

“It’s civic pride, it’s pride in our team and it’s just a great opportunity for families and residents to come together and to celebrate together.”