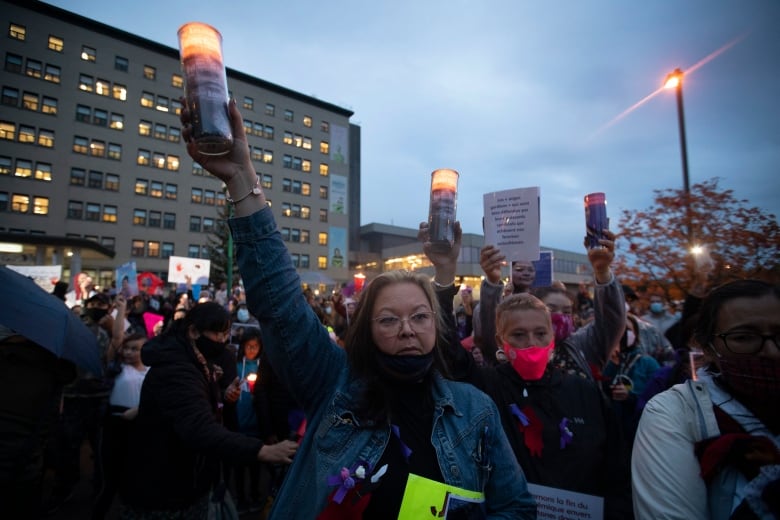 Sylvie Roy didn’t expect her career as a child psychologist to lead to where she is now — teaching health-care professionals in Quebec about Indigenous history and realities and explaining how decades of colonial biases may be harming their interactions with patients.

That notion is central to the cultural safety training Roy has been offering for years — a service that is in higher demand than ever in Quebec.

It’s a topic that will likely be raised when a coroner begins an investigation this week into the way Indigenous people are treated by Quebec’s health-care system. The inquest is looking into the death of Joyce Echaquan last year at a hospital in Joliette.

And it’s something that’s been on Roy’s mind increasingly as she sees her own mother, who is Atikamekw, grow older.

“I’m worried about her and the treatment she will receive when she starts needing more hospital care,” said Roy.

Using her father’s name has protected Roy from discrimination for the most part. That wasn’t the case for her mother, who goes by Awashish, a common Atikamekw name.

“When my mother would show up to the hospital there was a certain look of disdain, disinterest or indifference — all that would be expressed through people’s body language.”

That fear of discrimination has been voiced again and again by Indigenous people through different government inquiries, including Quebec’s Viens Commission on relations between Indigenous Peoples and public services.

It resonated more loudly than ever when Echaquan filmed nurses mocking and insulting her, moments before she died at the Joliette hospital in September 2020.

The three-week coroner’s inquiry into her death is beginning on Thursday, at the Trois-Rivières courthouse, where health-care workers and experts will be asked to explain what happened that day.

Roy was approached by the regional health board that manages the Joliette hospital, the CISSS de Lanaudière, shortly after Echaquan’s death to give a one-hour crash course in cultural safety — a request that left Roy speechless.

“I replied ‘Do you really think we can tackle something like this, do you think we can solve this issue in one hour?'” she said.

Roy ended up giving four separate three-hour conferences that were also videotaped and have now been seen by 9,000 of the 14,000 employees.

“Things improve, sadly, when there’s a crisis. That’s when people will move to action,” said Donna McBride, a member of the Algonquin Timiskaming First Nation.

McBride has been working alongside the Université du Québec en Abitibi-Témiscamingue (UQAT) since 2008 to develop its cultural safety training program.

Those requests are flooding in from all kinds of workplaces, including mining companies, municipalities, and the health-care sector, including the CISSS de Lanaudière.

Two seven-hour sessions for its employees are in preparation, in partnership with Atikamekw contributors from Echaquan’s hometown of Manawan.

“That’s how you build trust and openness,” said McBride, “with First Nation expertise at the table.”

Last November, Quebec’s minister responsible for Indigenous Affairs, Ian Lafrenière, announced that this kind of training will be offered to managers and health-care workers across the province’s health network.

A first step, said Roy, but useless if participants “aren’t driven by a sincere and honest desire to provide better services First Nations.”

After Roy finished her contract in Lanaudière, she was stunned when she heard her course was being used “as an excuse” by the nurses’ union to explain why two employees asked a patient to sing a song in Atikamekw and offered to call her by the nickname “Joyce,” last March.

The patient, Jocelyne Ottawa, said at the time she felt humiliated and intimidated, while the union said the employees were trying to show an interest in Atikamekw culture.

“I don’t see how the training could have been misinterpreted,” said Roy. “I thought it was ridiculous.”

Still, Roy said the incident reflects how “cultural safety is a process, not a single event” and that people need to educate themselves further once they leave the classroom.

Donna McBride said many participants feel guilty once the training was over.

“They wonder why this wasn’t taught in school and can’t believe that they’re not behind this part of their history,” she said.

Melissa Gill, who identifies as Anishnabe, said she has carried some of that ignorance herself.  “Growing up through school, I had this belief that once I obtained my degree, I’d be the expert.”

She followed several of UQAT’s sessions with her colleagues, which led her to question how Canada’s education system had left her with so many blind spots.

“That system should be humbled, to make the change in society that needs to happen to work together,” said Gill.

Roy said she often meets participants whose only Indigenous references are “those given in history books from decades ago, or the Oka Crisis.”

“I am astounded sometimes to realize the sheer ignorance of people when it comes to First Nations.”

But she is tempted to forgive that ignorance.

“Cultural safety is the responsibility of the entire system.”