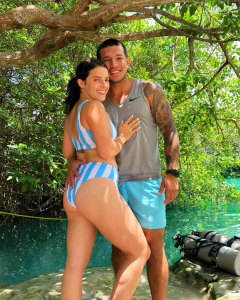 Javi Marroquin’s estranged fiancée, Lauren Comeau, posted on Sunday, August 25, about raising their son to respect women in the wake of the couple’s explosive argument.

Comeau, 26, posted a photo on Instagram that showed her kissing their 9-month-old son, Eli. “To be a mother of a son is one of the most important things you can do to change the world,” she captioned the pic, quoting author Shannon L. Adler. “Raise them to respect women, raise them to stand up for others, raise them to be kind.”

Her post came eight days after police were called to the Teen Mom 2 star’s Delaware home on August 17.

In the 911 call obtained by RadarOnline.com, Marroquin, 26, told a dispatcher that he was “trying to get someone out of my house.” He then revealed that the person was his sister Lidia. No arrests were made.

Speculation then swirled that Marroquin and Comeau had split. She deleted photos of her fiancé from Instagram and stopped following him after the altercation.

Two days after he called police, the gym owner posted a cryptic quote on his Instagram Stories that read, “If you ever feel like you’re losing everything, remember that trees lose their leaves every year and they still stand tall and wait for better days to come.”

Marroquin was previously married to Teen Mom 2 star Kailyn Lowry from 2011 to 2016 and they share a 5-year-old son named Lincoln.

“Even though I’ve said things in the past, it’s not my place to comment on their relationship or issues,” Lowry, 27, told Us after news of the couple’s troubles surfaced. “I wish him the best whether they’re together or not.”

The blowout came two months after the Air Force veteran proposed to Comeau.

“June 17th I asked my best friend to marry me,” he wrote at the time. “Our sleepless (mainly yours) nights… our endless laughs… and our countless jokes to each other now can be forever. Without you, our gym wouldn’t be possible. Without you we wouldn’t have a place to call home. Most importantly, without you, we wouldn’t be complete.”

“Thank you for being the greatest mom to Eli and now (soon to be) stepmom to Lincoln,” he continued. “I feared not finding someone that would love me and linc the way you do. Never have I questioned that with you. Thank you for everything you do for this family. I can’t believe I’m this lucky.”