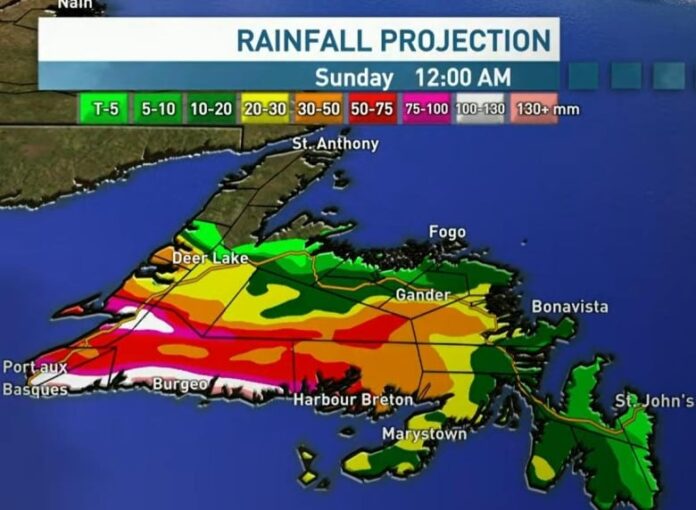 An incoming weather system is set to bring considerable amounts of rain, freezing rain and snow to much of Newfoundland on Saturday, with the western and southwest portions of the island expected to be hit the hardest.

All of Newfoundland and the southern coast of Labrador are under weather warnings from Environment Canada. Much of the island faces rainfall warnings, while freezing rain warnings are in effect for Bay of Exploits, Bonavista North, Buchans, Corner Brook, Gander and Grand Falls-Windsor.

Environment Canada meteorologist Justin Boudreau says the island can expect to see around 30 to 60 millimetres of freezing rain over the course of the weekend. The system is expected to start on the west coast and move east before cycling back to western portions of the island.

Much of the west coast is reporting periods of freezing rain and near-freezing temperatures late Saturday morning, which has led to messy driving conditions.

“Usually 40 millimetres and above of freezing rain is quite a bt of ice on things, so we’re expecting a bit of power outages and downed trees and that kind of stuff,” Boudreau told CBC Radio on Saturday.

“The possibility of a power outage somewhere in Newfoundland and Labrador tonight is very, very likely. So it could be you, and it could be an extended power outage as well if there’s a lot of damage or power lines down.”

In the event of an outage, he says it’s important to remember safety advice around the use of heating equipment or generators: Don’t use a generator inside a home or shed, keep them away from openings like windows or vents and keep equipment such as space heaters away from furniture or curtains.

Much of the island will also see high temperatures of between six and 10 degrees Saturday, which Boudreau says could cause local flooding as snow on the ground begins to melt.

Other areas, like parts of the Northern Peninsula, will see snow Saturday. Boudreau says the southern end of the peninsula will see 10 to 20 centimetres of snow, while more northern portions could see 20 to 50 centimetres. Parts of southern Labrador will see less snow, with five to 10 centimetres expected for Red Bay- L’Anse au Clair.

Towns like Burgeo and Port aux Basques are expected to see the heaviest amounts of rain. The town of Port aux Basques is still rebuilding from post-tropical storm Fiona in September, which brought heavy rain and winds that destroyed homes and displaced families in the community.

“When we do have storms coming out now, I mean there is some anxiety … especially the people that was affected by Fiona,” Burgeo Mayor William Bowles said Saturday.

“They’re up constantly checking the windows and watching the seas. Like you say, there is a fair bit of anxiety.”

Channel-Port aux Basques Mayor Brian Button says residents have been more on edge about impending weather since the storm, but added the town is also more prepared as a result.

The town issued a text message alert to residents about the impending weather Friday, which he says over 600 people have signed up to receive.

“It’s a total different feel. People worry more about the storms, you know, ever since Fiona. The few storms that we’ve had, people have had more flooding, and you know, more sea action around their homes and so on and so forth,” he said.

“There’s always that level of uncertainty now when we get it. And people are a little more on edge.”