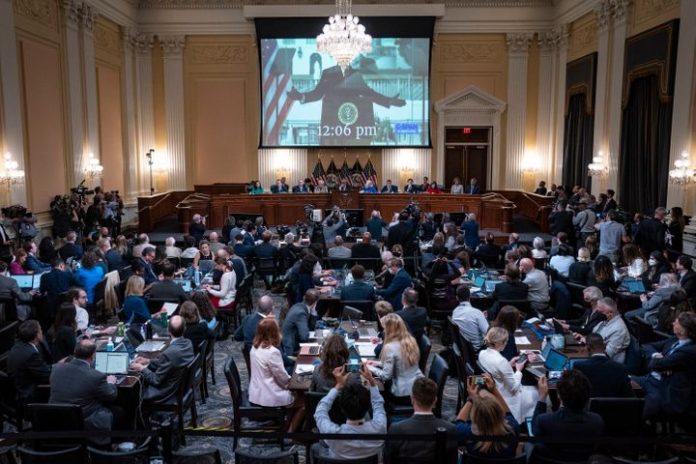 WASHINGTON — Weeks of sustained, high-profile discussion about Donald Trump’s attempt to overthrow democracy may not change the minds of his devoted followers, but they could well thwart Trump’s efforts to delegitimize criminal charges that prosecutors might wind up filing against him.

“I think people were prepared for this to be like the Trump impeachments,” said Sarah Longwell, a Republican consultant who before the hearings began was skeptical they would have much effect. “But it isn’t. It’s incredibly well executed.”

Of course, even with 20 million live television viewers watching the opening prime-time hearing on June 9 and millions tuning in for the four daytime ones since, that still only represents a relatively small percentage of Americans.

That statistic, though, pushed frequently by the former president and his allies, is missing the broader effect the hearings are having on the national conversation, Trump critics said. And even though the vast majority of the information the committee is detailing has already been reported in news accounts, having it come from videotaped clips of Trump’s own aides or in sworn testimony from the chandeliered, high-ceilinged Cannon Caucus Room appears to be carrying considerably more weight.

Meaning that Trump’s open threat to create civil unrest as a societal cost for prosecutors to consider when deciding to charge him may, in the end, fail to be the deterrent he might have hoped.

Norm Eisen, a former Obama White House ethics lawyer who worked for the House on its first impeachment of Trump for extorting Ukraine, said the live TV viewership count also misses those who see the most relevant clips in news casts or on social media. “These are the Watergate hearings, but for the streaming era. For the age of Netflix and YouTube and TikTok,” he said.

“Given the ubiquity of commentary about the evidence being presented during the hearings, whether on the news, social media, or at the water cooler, it would be hard not to be exposed to it at least to a limited extent,” said Mary McCord, a former senior Justice Department prosecutor. “This has the potential to move the needle a bit for people who aren’t firmly in the Trump camp already, possibly viewing more skeptically those who seek to downplay Jan. 6 and the involvement of others that led to it.”

Longwell has conducted dozens of focus groups of Trump voters since he left office that showed their continued loyalty to him and support for a 2024 presidential run. She said she was stunned that in two consecutive panels since the start of the hearings — the existence of which everyone in both groups was aware of ― not a single Trump voter wanted him to run again.

“The fact they all know the hearings are happening is an indication of the ambient noise that the hearings have been able to create, including for Trump voters,” she said.

Indeed, a recent poll taken after the first three hearings had been completed showed a measurable uptick in the percentage of Americans who believe Trump should be criminally charged for his actions leading up to Jan. 6, 2021, and on that day itself.

That figure had been 52% prior to the hearings and rose to 58% by June 17, according to the ABC News survey.

“People are familiar with what happened on Jan. 6 but millions of people are tuning into the hearings and finding out why it did,” said Amanda Carpenter, a former senior aide to Texas Republican Sen. Ted Cruz. “The hearings provide a chance for the public to rethink these events and change their minds, given all the new information.”

That the figure is still as low as it nevertheless shows that Trump’s actions are not universally recognized as the grave assault on democracy that they were, legal experts said.

When prosecutors go after mob bosses, people intuitively understand that ordering underlings to shake down businesses for protection money, sell drugs or even maim and kill those who defy them is both morally wrong and illegal.

But Trump, former prosecutors said, has benefited from the fact that Americans who don’t play close attention to the news — that is, most Americans — do not intuitively understand that trying to coerce foreign leaders into helping your campaign or coercing federal and state officials into overturning an election is similarly against the law.

The hearings are doing a good job laying out the various laws Trump appears to have broken as he tried to remain in power despite his election loss, former federal prosecutor Glenn Kirschner said.

“And I suspect, when it’s all said and done, we will learn that DOJ has been investigating in far-reaching fashion all along,” he said.

Trump’s staff did not respond to HuffPost queries, but Trump himself, in his public comments, appears agitated about the hearings. On June 16, he posted: “I DEMAND EQUAL TIME!!!” on his personal Twitter-like social media platform. Three days later: “WITCH HUNT!”

One top Trump adviser said he worried that the hearings are making criminal charges against Trump seem more justified and therefore, in his view, more likely. “That is a possibility,” he said on condition of anonymity.

Trump was, according to hearing testimony, warned by White House lawyers that his actions could leave him exposed to criminal charges, and his own statements make it clear he understands that threat still exists.

Within days of Jan. 6, Trump was already diminishing the significance of the assault on the Capitol while casting the blame on everyone but himself. He took to labeling the investigations into Jan. 6 a “hoax,” just as he done with both impeachments against him. And earlier this year, he took that argument to the next step, urging his followers to take to the streets if any prosecutors dared charge him.

“If these radical, vicious, racist prosecutors do anything wrong or illegal, I hope we are going to have in this country the biggest protests we have ever had in Washington, D.C., in New York, in Atlanta and elsewhere, because our country and our elections are corrupt,” he told the audience at his January rally in Conroe, Texas.

“Just like he did before Jan. 6, he’s already shaking his fist and telling us what he’s going to do,” said Danya Perry, a former federal prosecutor in the Southern District of New York.

What role, if any, Trump’s open threat to incite civil unrest in the event he is charged is having on federal and state prosecutors is unclear.

The district attorney in Fulton County, Georgia, is contemplating charges stemming from Trump’s attempt to coerce state elections officials into “finding” enough votes to overturn his narrow loss to Joe Biden in that state.

And federal prosecutors in Washington have been building a conspiracy case regarding the organized effort to block Congress from carrying out the “official proceeding” of certifying the 2020 presidential election. Some of the leaders of the mob attack have also been charged with “seditious conspiracy” — essentially, trying to overthrow the government ― for their efforts to keep Trump in power.

Prosecutors at neither level have said whether they are planning to charge anyone in Trump’s inner circle or Trump personally.

Jan. 6 committee member Jamie Raskin, a Maryland Democrat and a law professor, said prosecutors have an obligation to make decisions based only on the facts and the law, “without regard to public opinion.”

“I hope there are no prosecutors waiting around to take a poll on whether this or that person should be prosecuted,” he said.

In any event, legal experts, including former prosecutors, said the facts laid out by the committee would absolutely support criminal charges against Trump himself, given the testimony of top White House and campaign aides telling Trump he had lost the election and that his efforts to overturn that loss were both illegal and unconstitutional.

No previous former president has ever been criminally prosecuted, although charges against Richard Nixon, who resigned in disgrace after investigations proved his involvement in the Watergate break-in and coverup, may have been forthcoming had successor Gerald Ford not pardoned him.

Eisen recalled the congressional investigation into Watergate as he predicted that the Jan. 6 hearings, which committee chair and Mississippi Democrat Bennie Thompson said would resume after the July 4 recess, would similarly result in a dramatic shift in public opinion.

“People forget that in Watergate, the Republican congressional caucus and Republicans nationally remained basically united behind Nixon for over a year,” he said, pointing out that a majority of Republicans on the House Judiciary Committee still supported Nixon into the summer of 1974, just before the White House tapes were released. “And it turned in an instant. Two weeks later, Nixon was gone.”

Eisen said the videotaped statements from Trump’s own staff had the same potential for changing minds. “I believe we’re starting to see the beginning of the reorientation of the American people in that direction,” he said.

Trump, despite losing the election by 7 million votes nationally and 306-232 in the Electoral College, became the first president in more than two centuries of elections to refuse to hand over power peacefully. His incitement of the Jan. 6 assault on the Capitol killed five, including one police officer, injured another 140 officers and led to four police suicides.

Nevertheless, Trump remains the dominant figure in the Republican Party and is openly speaking about running for the presidency again in 2024.

In statements on his personal social media platform, Trump has continued to lie about the election and the Jan. 6 committee’s work, calling it a “hoax” similar to previous investigations into his 2016 campaign’s acceptance of Russian assistance and his attempted extortion of Ukraine into helping his 2020 campaign.