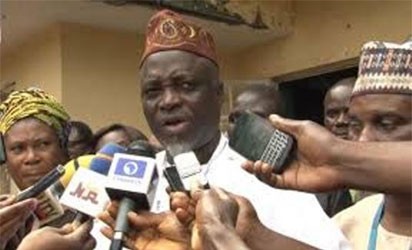 JAMB Registrar – I’ll quit if people in power try to influence me
ABUJA—Registrar of Joint Admissions and Matriculation Board, JAMB, Prof. Ishaq Oloyede, has vowed that he would quit his job if people in positions of authority try to influence him to do their bidding in the organisation. Prof. Ishaq Oloyede, the Registrar, Joint Admission and Matriculation Board (JAMB) fielding questions from newsmen This came as Presidential Advisory Committee Against Corruption, PACAC, led by the chairman, Prof. Itse Sagay, visited the tertiary institutions’ examination regulatory body in respect of the recent N36 million snake swallowing scandal that rocked JAMB. Oloyede said his fear when he assumed the headship of JAMB, was that politicians would not allow him do his work accordingly, a development, he said, would have made him quietly quit the job. Oloyede, who added that no one had ever approached him to influence anything, said: “Since I come here, nobody has called me to do any wrong thing. I have never seen anybody who will call me and say, somebody has done what is wrong, don’t allow it to go. “People who have authority over me have been the people who are even calling me to strengthen what I am doing. “Whereas my fear when I came here was that I was not going to stay long because what we used to peddle in the university is that these politicians will be interfering in one’s activities. So, I had made up my mind that if they call me to do what I am not supposed to do, I will go. “On no occasion has any of my superiors called me for any such thing. Minister of Education, Malam Adamu Adamu, is more puritanical than myself in his world view, let alone people higher than him.’’ On his part, Prof. Sagay commended Oloyede for what he described as “geometric increase” in remittance to the Federal Government coffers by the board under his watch. Recall that JAMB had remitted about N7.8 billion in 2017 to the Federal Government. Sagay said the visit of the committee was informed by the need to seek clarification on the alleged N36 million cash of the board, which had been in the media that it was swallowed by snake. He said he was also interested in knowing other challenges being faced by the board that require the committee assistance. Sagay while commending Oloyede for his high level of integrity, said: “We also wish to congratulate you for what I will call the geometric increase in remittance to the Federal Government of Nigeria. “We are not surprised. You have a name that has gone before you and we know that nowhere will you be operating in which there will not be events, which will show that you have maintained your outstanding character and integrity.” “We are here basically to learn more about JAMB. What are your problems, what are your challenges and also to offer our help if required in any respect within our competence. “We are also curious about some other things, for example as I said what challenges do you still have. I remember in some time past, it used to be commonly believed that if you do JAMB examination, different result would be prepared for you and score high marks and if you go to the university only to under-perform. “We want to know if this problem has been eliminated. Also, we read recently of some members of staff of JAMB at lower level who accumulated a lot of cash and did not properly account for it, leading them to make very absurd defenses, which has created a lot of funs nationwide. “We want to know what steps are being taken to ensure that monies realized from your work are now maintained in guaranteed fashion that people do not have the opportunity to abuse it. “We also want to know if there are any issues militating against the JAMB system and in what way can we help promote the excellent work that you are doing.’’
Share
Facebook
Twitter
WhatsApp
Pinterest
Linkedin
ReddIt
Email
Print
Tumblr
Telegram
Mix
VK
Digg
LINE
Viber
Naver
Previous articleStudent explains why she’s selling her virginity for £1 million and reveals that a Hollywood actor has bought it
Next articleSwedish Academy head quits Nobel body over sexual misconduct probe