‘It’s one by one’: Community workers keen to tackle Montreal’s pockets of unvaccinated 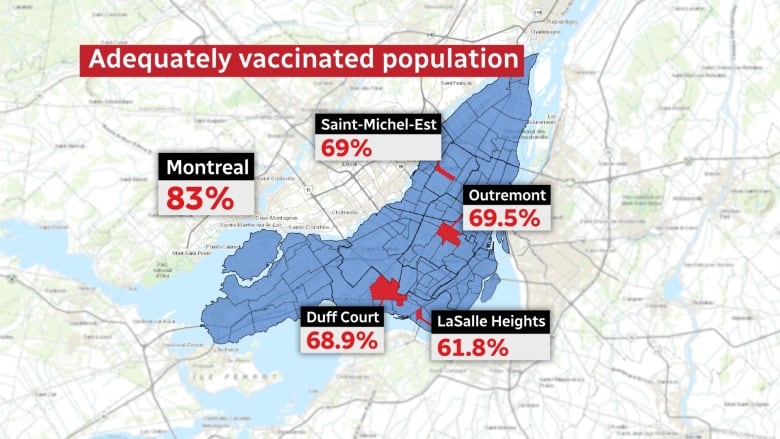 Last April, Sylvain Pilote and his team of community workers hit the streets of Montreal’s LaSalle borough to spread the word about the benefits of getting vaccinated against COVID-19.

Known as the Orange Brigade, the workers fanned out, going door to door and handing out pamphlets, in English and French, but also in Spanish, Russian, Portuguese, Serbian and Ukrainian. Finding the right approach sometimes took time.

In the neighbourhood of LaSalle Heights, home to many new immigrants and low-income families, residents were often out working during the day, so the community brigade learned they had to visit peoples’ homes in the evening.

“We didn’t pass once — we went there seven times, knocking at those doors,” said Pilote, who runs Loisirs Laurendeau-Dunton, a local community group. The personalized approach won people over.

Campaigns like the Orange Brigade were part of a concerted effort by community groups and public health officials in pockets across Montreal island to get the message across to residents and to make the vaccine available near where people live.

Now, a year later, with 83 per cent of Montreal’s population having received two doses, much of the funding for that kind of campaigning has dried up, and it’s no longer happening.

But in some neighbourhoods, the rate of vaccine uptake is still far lower than the city average.

LaSalle Heights is one of those neighbourhoods. Only 62 per cent of the population is vaccinated — more than 20 percentage points below the city average.

Pilote said another round of meeting with residents and speaking with them one on one is the best way to counter misinformation about the vaccine.

For the initial blitz, a private foundation helped him assemble a team of 20 people who visited 20,000 LaSalle residents over four months. Pilote said with so many still wary of the vaccine, money is needed once again to relaunch that campaign.

Moving away from ‘big picture campaigns’

Vaccination rates are also sluggish elsewhere in the Montreal area, including in parts of Outremont, Lachine, Saint-Michel and Montréal-Nord.

Given the emergence of the more transmissible Omicron variant, experts say maximizing the vaccination rate and encouraging everyone to get a booster shot will be crucial in minimizing the number of people who end up in hospital or dying — and allowing the city to open up.

In a statement, Quebec’s Health Ministry said it’s working on a new campaign to encourage people to get their booster and will target areas with lower vaccination rates in the coming weeks.

On Tuesday, the health authority for LaSalle Heights, the CIUSSS Ouest-de-l’Île, told CBC News it had plans to hold another pop-up clinic in the neighbourhood later this month.

Simon Bacon, a professor in behavioural science at Montreal’s Concordia University, has tracked the public’s response to the pandemic. He said he believes some of those who remain unvaccinated could still be persuaded, with the right approach.

“The big picture campaigns clearly haven’t worked, and so to continue down that line is probably going to do very little,” he said, and doing so could lead people resistant to being vaccinated to “dig in even deeper.”

The need for a more inclusive approach may be behind the province’s decision to scrap the so-called anti-vax tax, which critics had warned could further alienate those still balking at getting a shot.

Bacon said access to clear, simple information about the risks of vaccines, as well as their benefits, would help.

He pointed out even among those already vaccinated, the uptake for the third dose has been sluggish, due in part to a slow start to the booster campaign late last year and earlier messaging from the government suggesting that two doses would be sufficient.

WATCH | Expert warns against measures that could lead to people ‘digging in deeper’: 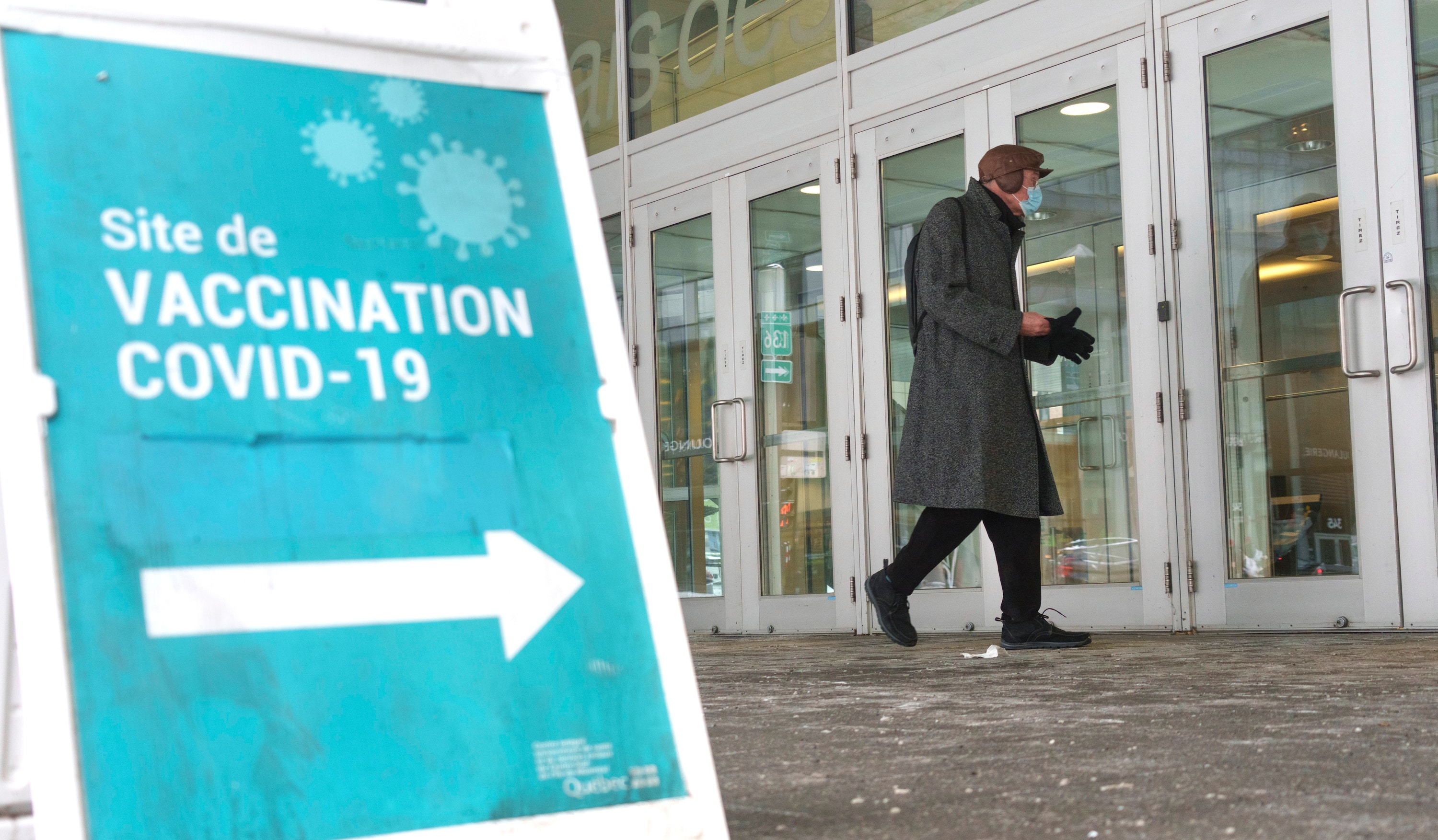 Reaching residents where they live

On the west side of Saint-Léonard, the vaccination rate also lags nearly 10 points behind the city average. It is particularly low among school-aged children across the borough. In some elementary schools, only a quarter of students have received at least one dose.

In the past 20 years, the neighbourhood has welcomed an influx of new immigrants, refugees and asylum seekers, said Pietro Bozzo, who runs La Maison de la Famille de Saint-Léonard, which offers services for about 500 families.

During the early days of the vaccination campaign last spring, the centre helped organize community brigades as well as a “town crier,” a van with loudspeakers mounted on top which stopped in different parks and streets to provide COVID-19 information in multiple languages.

“We were on the ground,” said Bozzo. “It worked. There was a lot of success.”

But Red Cross funding dried up after six months, and with it went precious momentum.

“You’re not putting out a fire here,” said Bozzo. “I’m not saying there should be endless amounts of cash. I’m saying, you know you’re going to be doing this for a while, don’t throw it out all at once.”

Many of the families who use his centre are still adapting to life in Canada. Some don’t speak French or English, and many are distrustful of government campaigns.

People who are hesitant about the virus are often made to feel like they aren’t being team players, said Bozzo. That leaves them feeling further alienated.

I think one of the key pieces is taking the time to listen to the concerns of the community, hear where their hesitancy is and answer their questions with solid science and empathy.– CIUSS Ouest-de-l’Île vaccination campaigner Katherine Moxness

Adopting a more personalized approach could help. If public health officials want to persuade certain groups like teens or seniors about the benefits of vaccination, hearing that message from their peers would be more persuasive, said Bozzo.

Bozzo would also like to see the return of pop-up or mobile vaccination clinics. Most of his clients don’t have a car, and even using public transport can be difficult. On the territory of the local health authority, the CIUSSS de l’Est-de-l’Île, there is currently only one vaccination point — the Olympic Stadium, which isn’t easily accessible.

Katherine Moxness, who is running the vaccination drive for the CIUSSS Ouest-de-l’Île, said she and her team are setting up more pop-up clinics in an attempt to boost the rate in her Montreal West Island territory and make it easier to get more people to seek a third dose.

They recently held a clinic in Duff Court in Lachine, another spot with a low vaccination rate.

Moxness said public health officials are also working with religious and community groups like Pilote’s in LaSalle to get their message across.

“They were great partners,” Moxness said, and they’d benefit from more funding.

She said school leaders are also important partners. When children became eligible for the vaccine, Moxness recalled, one school principal in a low-income neighbourhood called parents personally, to answer their questions. The principal at the school next-door did not. That first school had 180 children register for the vaccine, while the other only had 40.

“It made all the difference,” said Moxness, who is encouraging other schools to try the first principal’s approach in the hope it will have a bigger impact on the second round.

“I think one of the key pieces is taking the time to listen to the concerns of the community, hear where their hesitancy is and answer their questions with solid science and empathy.”

Pilote, for his part, said he’s optimistic that if his team can get back on the ground and persuade people “one by one” to get a first shot, a second and third will follow.

“It’s slow, but we need to be there,” Pilote said.