‘It was a hate crime’: One dead, three injured in synagogue shooting in San Diego area 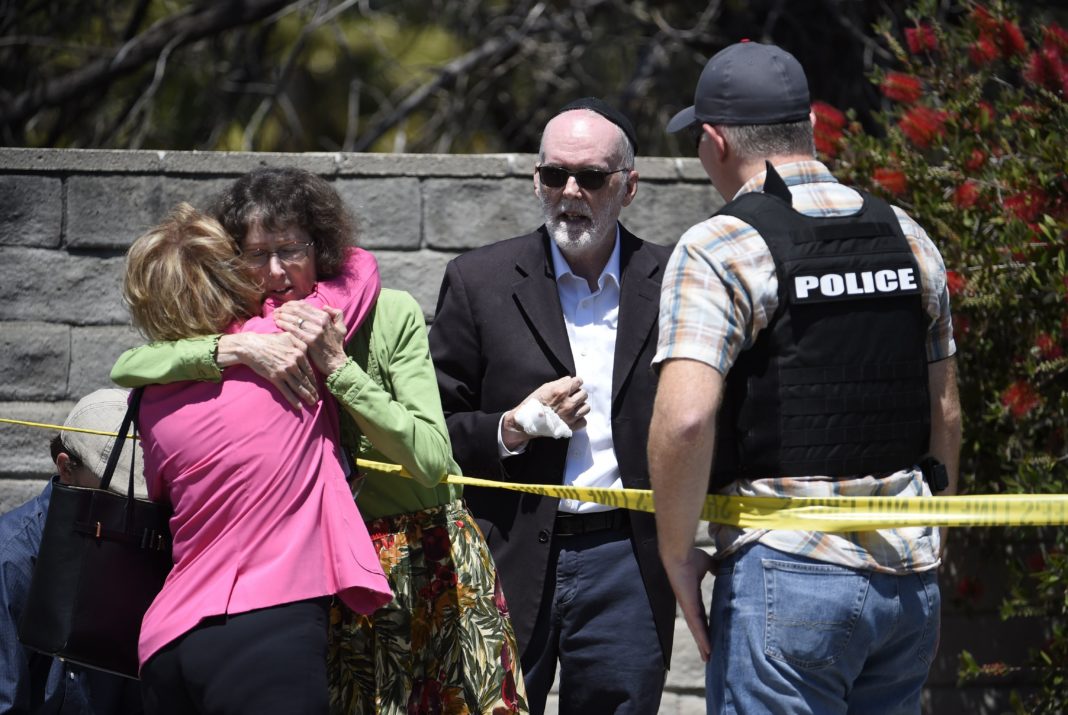 Two people hug as another talks to a San Diego County Sheriff’s deputy outside of the Chabad of Poway Synagogue Saturday, April 27, 2019, in Poway, Calif.

One person died and three others were injured Saturday when a gunman entered a synagogue outside of San Diego and opened fire as the Jewish community marked the last day of Passover.

The shooting occurred at the Chabad of Poway synagogue in Poway, California about 20 miles north of San Diego. Police said they responded to reports of a gunman around 11:30 a.m.

4 people hit in the shooting were admitted to the trauma unit at Palomar Medical Center at around 12:30 p.m. An older woman died on arrival. The other three patients are in stable condition.

Authorities said the gunman was a white male who was wielding an AR-style rifle. As the gunman fled the scene, an off-duty Border Patrol agent opened fire but did not hit him.

A 19-year-old man was detained for questioning in connection with the shooting. Law enforcement said a rifle was found in the front passenger seat of his vehicle.

“It was a hate crime,” Vaus told MSNBC.

An open letter posted on the internet under Earnest’s name contained an anti-Semitic diatribe. Four law enforcement sources told NBC News that they believe the letter is authentic.

The letter cites Robert Bowers, who opened fire at the Tree of Life synagogue in Pittsburgh six months ago, killing 11 people.

The FBI is also on the scene working with local law enforcement on the investigation.

California Gov. Gavin Newsom expressed condolences to the victims and their families.

“While we continue to learn more about what transpired, we can’t ignore the circumstances around this horrific incident,” Newsom said. “No one should have to fear going to their place of worship, and no one should be targeted for practicing the tenets of their faith.”

Rep. Scott Peters said he was praying for those affected by the shooting.

And President Donald Trump said his thoughts and prayers were with the victims and their families and thanked law enforcement.

The shooting comes exactly six months after a shooting at a Pittsburgh synagogue left 11 people dead.