Is recession ahead? It may depend on your Christmas shopping. 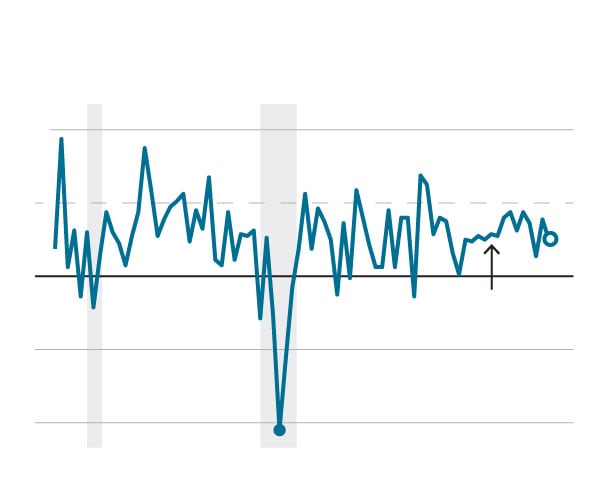 President Trump may get dismal poll ratings on many issues, from gun violence and health care to global warming, but not on the economy. Approval for his handling of the economy hit 51 percent in July. It slipped this month to 46 but remains far above his overall approval of 38 percent.

With increasing talk of trade war fallout and the next recession, economic growth in the months ahead is a high-stakes issue for next year’s election.

Even without a recession, continued expansion in the economy at or below the present 2 percent pace could test Trump’s 2016 campaign pledge of a 4 percent growth rate. presidencyat measures the ups and downs in the nation’s production of goods and services, also known as gross domestic product.

Over the past two decades, the United States has averaged 2.3 percent growth. That span includes two periods of significant contraction: The 2001 dot-com recession that followed a bust in technology companies, and the Great Recession of 2008-09 that followed a mortgage lending crisis.

Talk of recession among economists, and even in Internet searches, picked up this summer right as business investment, one of the major components of economic growth, turned sharply down. This component mainly reflects investment in assets such as land, buildings and equipment.

Business investment flipped from a 6 percent increase in the first quarter of 2019 to a 6 percent decline in the second. That’s according to preliminary figures from the U.S. Bureau of Economic Analysis, a nonpartisan agency that analyzes economic data. It was the largest retreat since early 2011. Economists say business investment decisions are based on expectations for factors such as costs, sales, interest rates and competition, and which can quickly swing between optimistic and pessimistic. Then businesses also consider the uncertainty around their expectations. Martha Olney, an economics professor at the University of California at Berkeley, likens that uncertainty to the forecast cone for a hurricane’s future path. The wider the uncertainty cone, the more likely that it will include the chance of an unfavorable outcome.

“The tariff by tweet policy is creating a whole lot of uncertainty for businesses,” Olney said. “And that’s what businesses hate, because they don’t want to plop down a whole lot of money on equipment or on construction in a really uncertain business environment.”

Business investment decisions aren’t just go or no-go, however. Companies may decide to wait or to spend on something else.

Perc Pineda, chief economist with the Plastics Industry Association, said some manufacturers have turned to buying other companies rather than building new facilities. “Absent trade uncertainty and absent high tariffs with China,” Pineda said, “I think the investment spending in the plastics industry would be at a higher rate than they are.”

So if business investment just took such a sharp turn down, why is the economy still growing at all? The answer is a much bigger factor in economic growth: consumer spending.

Consumer spending makes up most of GDP Components of GDP and their quarterly Components of GDP and their quarterly change,

Components of GDP and their quarterly change, Q1 to Q2 2019 The remaining components of economic growth may not be of much help in offsetting a downturn. Any significant increase in government spending would depend on action by a deeply divided Congress. Whether the Trump administration succeeds in greatly expanding exports depends on resolving disputes with other countries, negotiating and winning approval of trade agreements and lowering tariffs.

So an overall economic downturn or even a recession is extremely unlikely unless consumer spending stops growing, or its growth slows to a crawl.

Will pessimism spill over to consumers?

But an even greater risk to consumer spending could be a spread of general pessimism about the economy. Pessimistic families might delay buying a car or other major purchase that requires a loan, or families might spend less on discretionary purchases like Christmas presents.

The University of Michigan’s Index of Consumer Sentiment dipped to a new low for the Trump era in August, although it rebounded somewhat in preliminary September results. The change was driven by lower expectations for the future, not opinions about current economic conditions. In both surveys, more than a third of those interviewed volunteered comments on the negative impact of tariffs without being asked.

“The main thing that has really been making the firms and households skittish is the trade war,” said Gerald Daniels, an assistant professor of economics at Howard University. “People are not sure how that is going to affect them, and if they perceive that the economy may be slowing down, they may spend less.”

Data on GDP and its components is from the Bureau of Economic Analysis. Quarterly growth rates are seasonally adjusted at annual rates. The business investment category, known as gross private domestic investment, includes spending on fixed assets, as well as investment in unsold inventory and sales of new homes to consumers.