Is Getting Married Really Worth It? 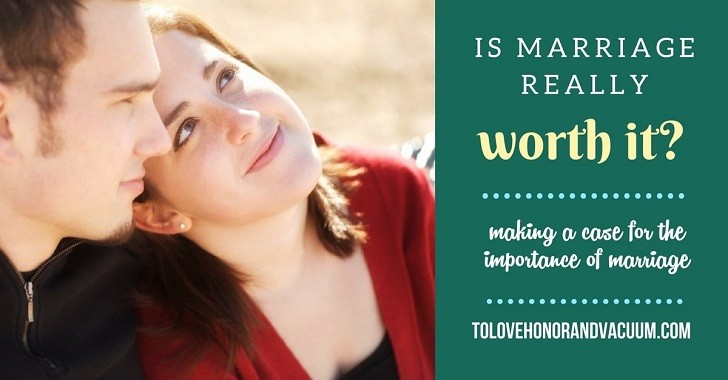 Is marriage worth it?

That’s a question so many people ask today. All around them it seems like everyone is divorcing and married people are miserable. But is that actually true?

All week we’ve been looking at some tough problems in marriage, and I thought today, for my Friday Marriage Musings, I’d come back to basics and write a defense of marriage. I actually wrote this first in a column a few years ago, but I thought it was time to talk about it once again.

Sheila’s Marriage Musings: Getting Married is Definitely Worth It!

If an alien were to peruse the magazines at the checkout counter, he or she would likely conclude that humans are all masochists: we’re inexplicably drawn to the institution of marriage even though we know our partners will cheat on us, denigrate us, and complain about our lack of bedroom prowess. Our kids, reading those same headlines, are likely to become disenchanted with the institution, too. Marriage is a pipe dream. The most we can hope for is a few years of happiness before it all falls apart.

After all, even beauty, that most prized possession, can’t keep a spouse in line. Tiger’s wife is beautiful. Sandra Bullock is beautiful. Jennifer Aniston is beautiful. But their husbands all ran around on them. And women aren’t that much better. Leanne Rimes, Jennifer Lopez, Heidi Klum–even Whoopi Goldberg!–have all been caught cheating.

Disastrous relationships and celebrity seem to go hand in hand, of course, from as far back as Cleopatra. But today it’s not just celebrities whose marriages are failing. Many kids who have witnessed family breakdown firsthand. Those they know and love couldn’t make it work, so why should they expect to find lifelong companionship themselves?

Let me attempt to answer that question. Yes, marriage is hard. Yes, people can have affairs. But despite the epidemic of non-commitment in Hollywood, more than 50% of marriages do survive in the here and now—and the rate is higher for first-time marriages. Sure many marriages fail, but it’s not as if the institution is dead. In fact, Shaunti Feldhahn crunched the numbers in her book The Good News About Marriage and found that the divorce rate is closer to 30%. Things are not as bad as magazine covers make them out to be.

Thinking marriage is going to fail, though, can become a self-fulfilling prophecy.

If we figure marriage is doomed, we’re far less likely to look for someone that we can see ourselves growing old with, and far more likely to seek someone to be with right now. That can cause immense heartbreak, but also more seriously it can lead to pregnancies that hand us the hardest job in the world—parenthood—without a partner to shoulder the burdens and the joys with. When we don’t believe in long-term relationships, we often get too involved in short-term ones, even if these short-term ones have long-term consequences.

The problems with forsaking life-time commitment don’t just fall on those who have yet to say “I do”, though; they chase those who have already promised it. When people think that they can run if things aren’t going their way, they’re far less likely to work on problems. And if you feel like your commitment isn’t solid, you’re less likely to bring up problems, too. Your marriage can’t grow.

Yet problems don’t have to signal the end of a relationship.

In their book, A Case for Marriage, Linda Waite and Maggie Gallagher reported on a five-year study of couples who rated their marriages as terrible. Those who divorced in that five-year span were less likely to be personally happy than those who stuck it out. But even more striking, 78% of couples who stayed in their marriages, even during the tough times, five years later rated those marriages as very good. In other words, if your marriage is in the toilet, it’s not necessarily time to flush it.

And so is marriage worth it? Well, you have to believe in marriage to see it work: it’s just too hard to keep a relationship together when one person has left the escape hatch open. Yes, people can cheat on you. Yes, they can betray you. Maybe you’ve already been married and you’ve experienced this firsthand. But it doesn’t mean that all potential spouses will forsake you. Most marriages still work. Marriage is worth it. And marriage is worth fighting for, because life is just too lonely without someone to walk through it with us.

Every Friday I send out my weekly blog roundup–with my Friday opinion piece–and lots that happened on Facebook and Pinterest, too. Don’t have time to read the blog everyday? Get the Roundup!

And when you sign up, you’ll also receive my FREE ebook The Best of Reality Check, with my 20 favourite columns from my 12 years of writing.

Share
Facebook
Twitter
WhatsApp
Pinterest
Linkedin
ReddIt
Email
Print
Tumblr
Telegram
Mix
VK
Digg
LINE
Viber
Naver
Previous articleIn Which I Make a Fool Out of Myself Multiple Times
Next articleHow Do I Keep My Teenage Son from Getting Addicted to Gaming?