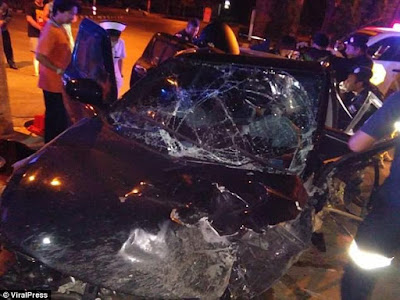 An Irishman teacher who was killed in a horror car crash in Thailand was reportedly having sex with a Thai woman at the back seat when the driver lost control, Authorities believe.
The Ex-pat English teacher John Malone, 39, was said to be travelling in a speeding black Suzuki when it lost control and hit a concrete post on Wednesday morning at 1am, Daily Mail reported 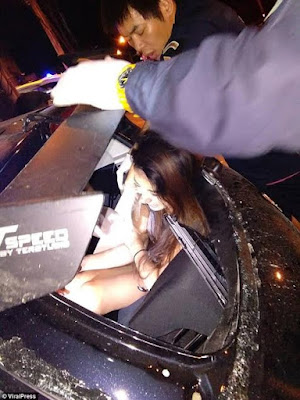 Horrific CCTV shows the car spinning several times as the glass smashes before it comes to a stop further down the road in Chiang Rai, Thailand. 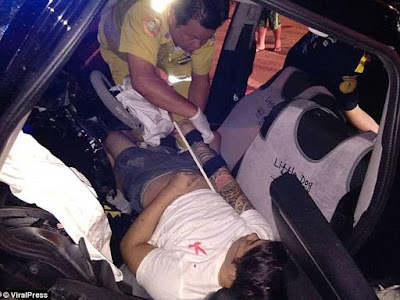 Rescuers who arrived at the scene first found John half-naked while a naked Thai woman who survived the crash was in the back passenger seat and both didn’t had their seat belts on.
The driver and another female front seat passenger who was recused are in a serious condition and are being treated at Kasemrad Sriburin General Hospital.
The volunteer rescue foundation Siam Ruam which attended the crash said authorities were now investigating.
A spokesman said today : ‘One foreign man died in the crash. The staff helped to bring out the bodies and give first aid.
The number plate of the crashed black Suzuki 795
‘This was a black Suziki Swift and it was speeding. We think the man was having sex in the the car.
‘There were three Thai people and one foreign man. Two of them were women.
‘They were injured and the driver was unconscious but only the man died.
‘How it happened exactly we do not know yet. From the scene we know that the two passengers did not have clothes on. The man had a small t-shirt.
‘We don’t know how the driver crashed. We have not been able to investigate with him yet.’
The rescue foundation said that all three of the other people involved in the crash were Thai and that John, originally from County Longford, was the only foreigner.
Mr. Malone was a teacher at The Learning Center in Chiang Rai, a small city in northern Thailand on the border with Laos and Myanmar.
The company posted a tribute online. They said: ‘We have lost today one of our beloved teachers, John Malone.
‘John was at the heart of TLC team, helping in every way with his usual smile and happy attitude. You will always be in our hearts. RIP John.’
A spokesperson for the Department of Foreign Affairs in Ireland confirmed that they are aware of the incident and are ‘providing consular assistance’.
See more photos and watch the CCTV footage of the crash below..
Share
Facebook
Twitter
WhatsApp
Pinterest
Linkedin
ReddIt
Email
Print
Tumblr
Telegram
Mix
VK
Digg
LINE
Viber
Naver
Previous articleCute photos of Harrysong’s twins, Perez and Tarela
Next articleLol! Harrysong may have used ‘stolen’ photos to announce the birth of his twins