Inside the training camp where Google shares its A.I. secrets with Alphabet-invested companies 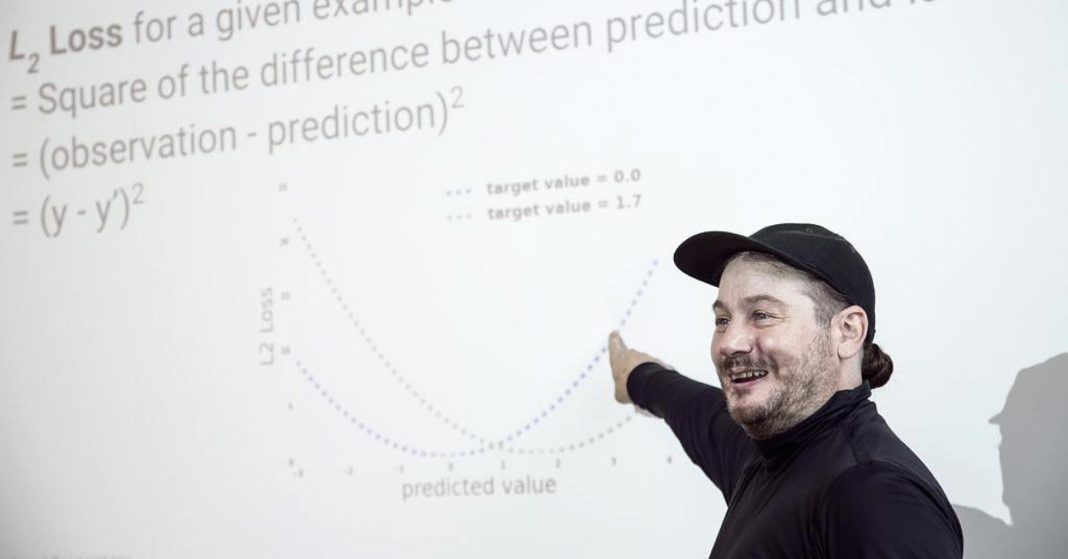 A group of about 30 engineers sipped coffee and tapped out notes on their laptops, while a charismatic Google employee named Michael “Mig” Gerard whipped through a presentation on how to best apply machine learning, a trendy sub-field of A.I. in which software programs get “smarter” at solving problems over time as they receive more data.

He zoomed through slides on obscure technical areas like classification versus regression problems and fielded questions on data labeling and model complexity.

“If you start with a simple model, you’ll know if it explodes before you spend much time on it,” he joked.

While the audience of fellow engineers got the joke, they weren’t who you might expect.

Instead of fellow Google employees or computer science graduate students, the chairs were filled with more than 100 engineers from about a dozen big privately held companies that Google’s Alphabet, had invested in.

It was part of a three-day machine learning boot camp thrown by CapitalG, the late-stage investment arm of Google parent company Alphabet. Gerard was one of more than 20 Google employees volunteering his time to make it all happen.

CapitalG started the program this spring as a way to tap one of Google’s biggest assets — its leadership in the field of A.I., or artificial intelligence, where machine learning fits in — as it faces stiffer competition from other gigantic investors, like the $100 billion Softbank Vision Fund, who want a piece of Silicon Valley’s growth.

Growth-investment and late-stage deals received the bulk of venture capital dollars last year, and late-stage funding appears to be making up the largest deal volume this year, too.

Since its formation in 2013, CapitalG (previously Google Capital) has billed itself as a returns-driven investor, rather than a strategic investor. That means it invests in companies that it thinks will drive high pay-outs, versus those that could somehow help Alphabet’s business or become future acquisitions.

Nonetheless, CapitalG leans heavily on the Google’s resources, pitching its value proposition as offering access to Google experts alongside its cash.

Google employees will work directly with portfolio companies to provide security audits, dole out marketing advice, and advise on international expansion plans, for example. In the last six months, the firm estimates that more than 300 Google employees have worked with CapitalG-backed companies in some way.

But as machine learning and artificial intelligence have increasingly become a staple in every tech company’s tool-box — and Google has rebranded itself as an AI-first company — the firm realized that it could provide a specific kind of help that few other investors could offer.

So late last year, Johan Duramy, a CapitalG principal on the growth team, called up Zuri Kemp, who heads up Google’s engineering education program, and asked if she could help him create a modified version of the machine learning training program it gives to its own engineers.

Kemp laughs that even though she had never heard of CapitalG (a testament to the vastness of the Alphabet universe with its more than 80,000 employees), she liked the idea and set to work preparing a training set. The boot camp in its finished form was like an amped-up, in-person version of the online machine learning “crash course” that Google launched in February.

(Since that program launched, its landing page has had over one million unique visitors, Kemp says.)

The first CapitalG machine learning marathon took place in April and Kemp says that she got a lot of feedback. The biggest change this time was separating engineers into a 3-day applied introduction course and a week-long, more advanced session.

“There’s a need across the industry to have these content, tools, and techniques,” she says.

The free program ends up being a sweet deal for participating engineers, CapitalG and Google itself.

“When approached about this opportunity and finding out it was free, I was like, ‘Oh my gosh, this is amazing, what’s the catch!'” says Jeff Feng, who works on the data team at Airbnb.

More than 60 Airbnb data scientists and engineers have participated in the first two sessions and nearly 200 had expressed interest overall.

Airbnb uses machine learning and AI in a bunch of ways, including to rank search results, translate messages and reviews into different languages, and prioritize photos in its listings and Feng says that the CapitalG ML course compliments a data science education program he spearheaded internally. It allows beginners to begin speaking the language of machine learning, while people in the advanced session get their hands dirtier through one-on-one sessions where Google employees will give them tailored advice on internal projects.

Airbnb tracks how many machine learning models its engineers write and Feng says it plans to keep track of how many new models come from people who went through the course now, too. Based his own experience and the feedback from other engineers so far, he expects that the team will keep funneling as many employees through the program as it can.

For CapitalG, the course not only helps it stand apart from other funds competing to invest in the hottest private tech companies, but also helps its portfolio companies build better products, make more money and achieve great exits.

“When we invest in a company we have a thesis on what will drive its growth, and then we lean on Google to help drive that growth,” Duramy says. As Google sees machine learning and AI as the secret sauce for its own products, so too does CapitalG see it as an important tool for its portfolio.

“Ultimately our interest is for the companies to be more successful because of this,” he says. “It’s too early to tell, obviously, but the initial signals are promising.”

Plus, most of the heavy lifting falls to Google employees.

While one big point of turning Google into Alphabet was to make individual “Other Bets” like CapitalG more financially independent and accountable, CapitalG describes the bootcamp as a partnership, and says that it doesn’t have to fund most of the event.

On Google’s end, Kemp says that Google employees enjoy participating, and it provides the company with useful feedback on its educational tools.

Plus, it can encourage participants to use Google tools. For example, several engineers said halfway through the course that they planned to try out Google’s TensorFlow software, used for artificial intelligence. TensorFlow is an open-source framework, but getting more people to use it helps improve the system, which benefits Google’s internal teams, too. TensorFlow adoption also potentially pushes engineers towards its other, paid products, since it’s well aligned with parts of its cloud offering, like its tensor processing unit (TPU) chips.

CapitalG’s Howard was adamant that the program wouldn’t feel like a sales pitch in any way, and Kemp, too, puts it squarely:

“Obviously it’s a win for us if users adopt TensorFlow, if users move over to Cloud ML, but it’s never the focus of the content,” she says. “There’s a way to do it gracefully where you offer [the training] without selling Google’s product.”

With its second class completed, CapitalG is aiming to host several more boot camps in the Bay Area, one on the east coast, and an another in India, where it has a handful of portfolio companies.

Michael Lusignon, an engineer from security company CloudStrike, flew in from Florida for the week-long course. Even though it was a big disruption from his day-to-day, he says, two days in, that the commitment was worth it.

“The level of training we have here is sort of a rare opportunity,” says Michael Lusignon. “When we got the invitation, I jumped right on it.”