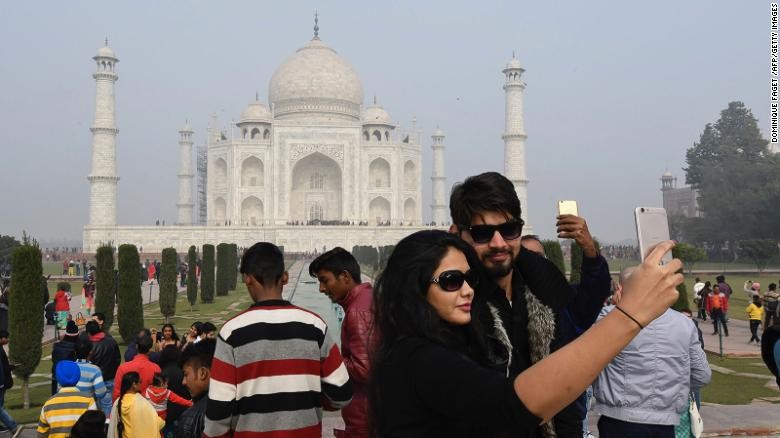 Tourists take selfies against the backdrop of the Taj Mahal.

New Delhi (CNN)India’s Supreme Court has expressed concern that one of its most famous landmarks, the Taj Mahal, is showing signs of discoloration.

Photographs from January 2018 show small brown and green spots on the marble facade of the mausoleum built by the Mughal ruler Shah Jahan for his third wife, Mumtaz Mahal.
The court questioned the government’s administration of the landmark. “We don’t know whether you have or perhaps don’t have the expertise. Even if you have the expertise, you are not utilizing it. Or perhaps you don’t care,” said the judges of the bench, according to local media. They further suggested the state government look to getting foreign expertise to manage the site.
In a case that has worked through the court for more than three decades, lawyer MC Mehta argued that air pollution from surrounding industries has corroded the Taj’s white marble walls and other historical monuments nearby. In 1996, he won when the court ruled that many of the industries surrounding the monument must be relocated.
But it was an empty victory, as Mehta has had to continue to argue the case in the past two decades to ensure that the judgment is carried out.
Preventing degradation is a constant battle.
“Yellow pallor pervades the entire monument. In places the yellow hue is magnified by ugly brown and black spots. Fungal deterioration is worst in the inner chamber where the original graves of Shah Jahan and Mumtaz Mahal lie,” said the petitioner.
In recent years, the Taj Mahal has suffered at the hands of insects that breed in the swampy waters of the Yamuna River, which flows behind the monument. The river has become highly polluted in recent decades. Indian media reports say that the insects leave behind a green residue, perhaps their excreta, which must be treated annually.
The organization overseeing the Taj Mahal implemented a three-hour time limit in March on all visitors to prevent overcrowding.
The Taj Mahal, located in India’s biggest state of Uttar Pradesh, has been derided by some of the state government’s leaders, including the chief minister, who said the UNESCO heritage site did not represent Indian culture.
Share
Facebook
Twitter
WhatsApp
Pinterest
Linkedin
ReddIt
Email
Print
Tumblr
Telegram
Mix
VK
Digg
LINE
Viber
Naver
Previous articleWe need to stop giving Kanye a platform to lie
Next articlearchaeologists says King David’s city discovered, Ancient site linked to biblical kingdom