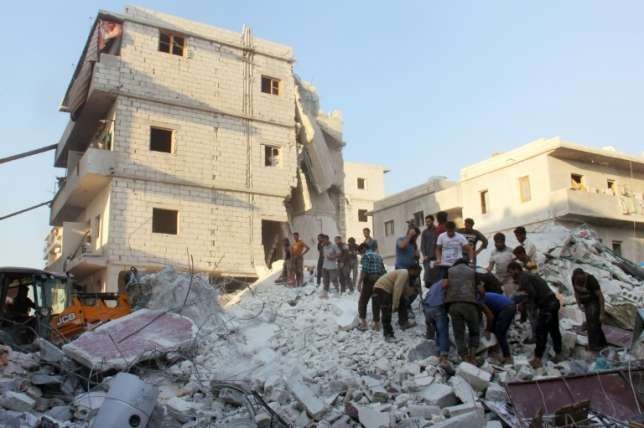 At least 28 civilians were killed in air strikes on northwestern Syria where a planned safe zone has been overshadowed by a bombing campaign against jihadists.

At least 28 civilians were killed in air strikes on northwestern Syria where a planned safe zone has been overshadowed by a bombing campaign against jihadists, a monitor said Saturday.

Four children were among the dead in the overnight strikes on the town of Amanaz, in Idlib province near the Turkish border, the Syrian Observatory for Human Rights said.

The Britain-based watchdog had earlier reported 12 dead in the strikes on the town in Harem district around 20 kilometres (12 miles) northwest of the provincial capital Idlib.

It said it could not immediately determine whether the strikes had been carried out by warplanes of the Syrian government or its ally Russia.

But they are the latest in an intensifying air campaign carried out by the two governments against jihadist fighters who control most of the province and are not party to a safe zone deal brokered by Russia, Turkey and Iran.

The surge in bombing raids has forced hospitals in the province to close, medical charity Doctors Without Borders (MSF) said on Friday.

They were triggered by an offensive by jihadist fighters led by Al-Qaeda‘s former Syria affiliate launched against government-held villages in neighbouring Hama province on September 19.

The jihadists control nearly all of Idlib province after driving out Islamist former allies earlier this year.

Russian President Vladimir Putin and Turkish counterpart Recep Tayyip Erdogan agreed on Thursday to step up efforts to establish a safe zone in Idlib as part of a wider agreement struck in May.

Three other safe zones have already been set up — in Eastern Ghouta near Damascus, parts of the south and some areas of the central province of Homs.