In Southern India, The Spirit Of Ramadan Is Served In A Bowl Of Porridge 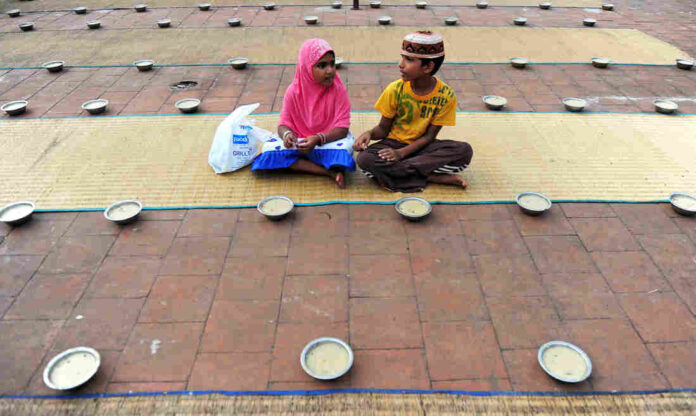 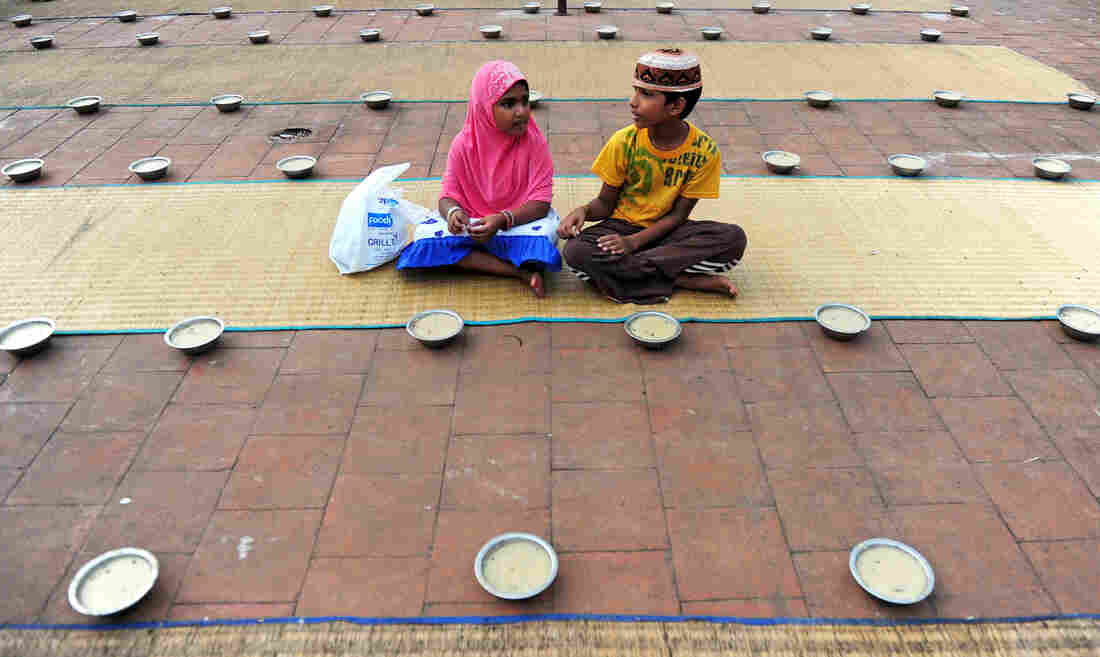 Young Indian children sit with bowls of porridge (nombu kanji) as they prepare to break the fast with the Iftar meal during the Islamic month of Ramadan at The Wallajah Big Mosque in Chennai last July. Arun Sankar/AFP/Getty Images hide caption

Young Indian children sit with bowls of porridge (nombu kanji) as they prepare to break the fast with the Iftar meal during the Islamic month of Ramadan at The Wallajah Big Mosque in Chennai last July.

As I hurry home battling the rush hour traffic in the evening, I see a queue in front of the gates of the local mosque. Men in white skull caps, women clad in saris and burkas, young children with school bags on their backs — all are waiting with containers in their hands for a share of the nombu kanji. Mosques in the south Indian states of Tamil Nadu and Kerala distribute the kanji, a lightly spiced rice and lentil porridge, before the sunset prayers during the fasting month of Ramadan, which starts Friday evening.

During her pre-Ramadan shopping, Shahida Khalique from Tiruppur, a town in the Indian state of Tamil Nadu, buys extra rice, lentils, spices and other items for making nombu kanji. She distributes the additional provisions among four women who work for her.

“I give them enough ingredients to make the nombu kanji for 15 days,” she says. “On the days I add meat to my kanji, I give them a portion so that they, too, can cook their kanji with meat that day.” Her sister-in-law, who employs the same set of women, provides the supplies for the next 15 days.

The most obvious feature of Ramadan is abstention from food and drink from sunrise to sunset, the idea being to create an intimate experience of thirst and hunger for 30 days in a row. But this Muslim holy month is also a time to emphasize the spirit of giving and sharing, to practice as much charity as possible. The nombu kanji provides one way of offering help to the needy – ensuring nourishment for those who might not have enough to fill their stomach after a long day’s fast. During Ramadan, Muslims fast from sunrise to sunset. Iftar is the meal families eat together at sunset to break the fast.

M. Mohamed Ali, director of the Food Consulate,a school for culinary arts in the city of Chennai, says, “When Muslims break their day-long fast, the first thing they do is have water and dates.” The Prophet Mohammed is believed to have opened his fast with dates, and Muslims try to follow the same practice when possible.

“In Tamil Nadu and some parts of Kerala, they follow it up with a few bowls of kanji before praying,” Ali says. “This rice porridge keeps the stomach light” – he says it’s seen as easy to digest for bodies that have been fasting.

But since dates aren’t produced locally, not everyone can afford to buy them, notes Tamil cookbook author and food blogger Hazeena Seyad. “Rice is the staple food in Tamil Nadu and Kerala,” she explains, “and the nombu kanji, with its rice and lentil base, offers a nutritious and accessible meal after a long day’s fast.” 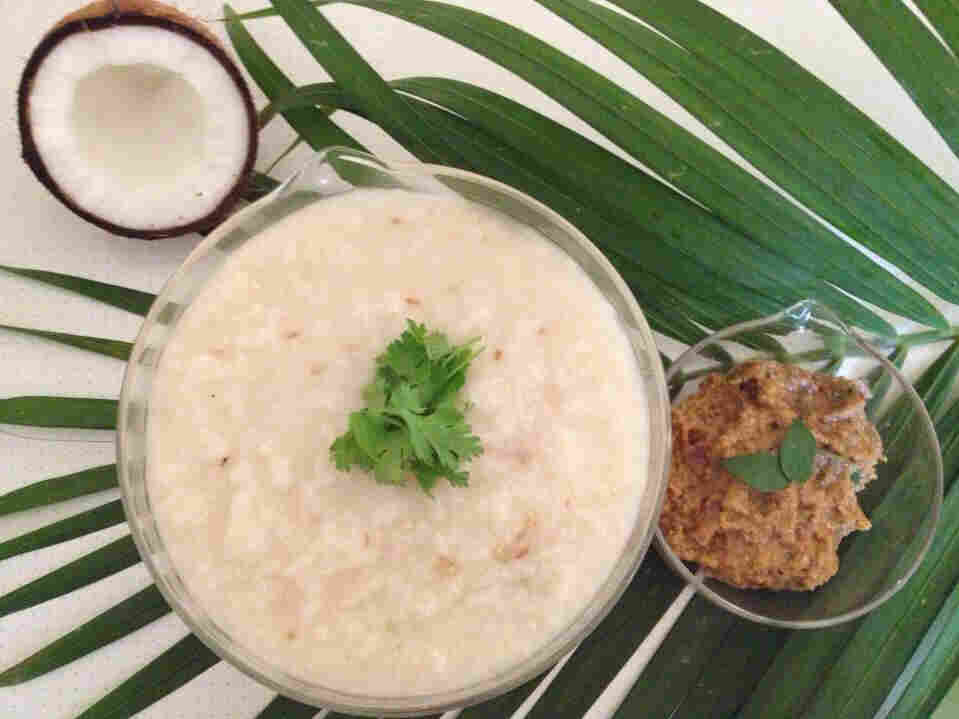 A bowl of nombu kanji prepared by Tamil cookbook author and food blogger Hazeena Seyad. “Rice is the staple food in Tamil Nadu and Kerala,” she explains, “and the nombu kanji, with its rice and lentil base, offers a nutritious and accessible meal after a long day’s fast.” Courtesy of Hazeena Seyad hide caption

A bowl of nombu kanji prepared by Tamil cookbook author and food blogger Hazeena Seyad. “Rice is the staple food in Tamil Nadu and Kerala,” she explains, “and the nombu kanji, with its rice and lentil base, offers a nutritious and accessible meal after a long day’s fast.”

Kanji is just one variation of congee, a rice porridge that first arose in Asia more than 1,000 years ago. Iterations are found from China to Korea and Japan to Bhutan and beyond.

Kombai S. Anwar, a local historian who made an award-winning documentary on the history of Tamil Muslims, says that the tradition of making kanji as a community meal is age old in the region. “A non-vegetarian porridge of sorts, called the koozh, was made with millets and broken rice in the region even before the advent of Islam,” he says.

Mohamed Ali of the Food Consulate notes that “koozh is still served in Amman temples – temples dedicated to female deities — as prasadam.” Prasadam is the offering of food made to a god or goddess that is later shared among the worshipers. “Devotees gather and cook the meal outside the temple before offering it to the goddess and sharing it among themselves,” he explains. The practice of such community meals, prepared on a wood fire, spread into mosques and became a part of the Tamil Islamic tradition as well, he says.

M.I. Mohamed Ali, secretary of a mosque in the southern city of Coimbatore (no relation to Ali of the Food Consulate), says in his congregation, they distribute kanji from about 4 p.m. until 5.30 p.m. The mosque makes enough kanji to hand out both to the poor who come just to collect it, and to worshipers who arrive for sunset prayers.

“Normally, it is distributed to the poor people living in the neighborhood,” Ali says. “We send the kanji to the homes of patrons who have donated money and materials to the mosque. Once every week, we distribute it to people from other faiths who come to sample the fare.”

Four cooks prepare about 154 pounds of kanji each day at this Coimbatore mosque. The men in charge of cooking arrive in the morning to get to work. One of them tackles onions and tomatoes arranged in a pile, while another sits down to peel and crush garlic and ginger and chop coriander and mint leaves. A third one measures spices, powders, rice and lentils, and the oils, while the fourth lays the kindling and prepares the cooking vessels. They will feed about 1,000 people in a day. Once the kanji is cooked, lids are sealed for about two hours to allow the flavors to settle and the mixture to cool down.

Anwar says that each family and each mosque has its own unique recipe, though the basic ingredients remain the same. Mosques draw up the budget for kanji a couple of weeks before the start of Ramadan. “People may make small donations, while some families may give the money for a day’s meal,” he says. Right now, it costs roughly $125 to feed about 1,000 worshipers each day.

Last year during Ramadan, Anwar led a group of 25 people on a historic sightseeing tour of one of the largest and oldest mosques in Chennai. Some of the participants — though not Muslim — fasted, while others skipped lunch. “We all had nombu kanji together and it was a unique experience for all of us,” he says.

Fehmida Zakeer is a freelance writer based in Chennai, India.