In Borno 2,043 return home after years in Maiduguri IDP camp 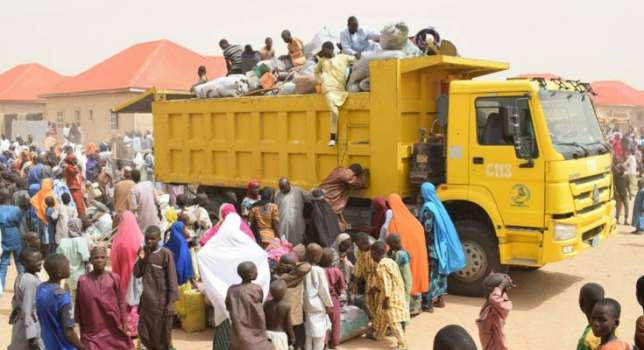 In Borno 2,043 return home after years in Maiduguri IDP camp

The IDPs make up 378 households and are the first batch of IDPs who willingly expressed the desire to return home.

2,043 Internally Displaced Persons (IDPs) have returned to their original homeland in Guzamala local government area of Borno State after years in the Bakassi IDP camp in Maiduguri, the state capital.

According to a statement signed by the Deputy Director of Public Relations, Theatre Command Operation Lafiya Dole, Colonel Onyema Nwachukwu, the IDPs commenced movement to return to their homes on Tuesday, June 19, 2018.

The IDPs make up 378 households and are the first batch of IDPs who willingly expressed the desire to return to their communities to resettle and resume their traditional occupation of farming and fishing, as well as other socio-economic activities.

While speaking during the flag off of the movement at the IDP Camp, the Theatre Commander Operation Lafiya Dole, Major General Rogers Nicholas, said the desire of the Chief of Army Staff, Lieutenant General Tukur Buratai, has been to ensure that IDPs who are willing to return home are able to,

He said that the Theatre Command worked jointly with the Borno State government and the local authorities of Guzamala to ensure that the IDPs could return to a peaceful region, so that they can begin normal lives.

He gave an assurance to the returning IDPs that the government will provide adequate protection to ensure that they resettle peacefully into the homes they left behind. He said the Army’s Operation Last Hold has been inaugurated to operationally cover the locality and other communities.

He further encouraged non-governmental organisations (NGO) and other well-meaning Nigerians to support the returning IDPs with farming implements and other relief materials to enable them settle back quickly into their respective communities.

The IDPs are some of the millions of victims who have been displaced by the activities of terrorist group, Boko Haram.

Since the insurgency of the terrorist group escalated after a 2009 crackdown by the military, Boko Haram, chiefly under Abubakar Shekau‘s leadership, has been responsible for the death of over 20,000 people and the displacement of more than 2.5 million scattered across Internally Displaced Person (IDP) camps across the country and its neighbours.

After a massive military operation resulted in the displacement of the group from its Camp Zairo base in the infamous Sambisa Forest, it has resorted to suicide bomb attacks on soft targets and carried out daring attacks on military bases, with hundreds of captives still unaccounted for.