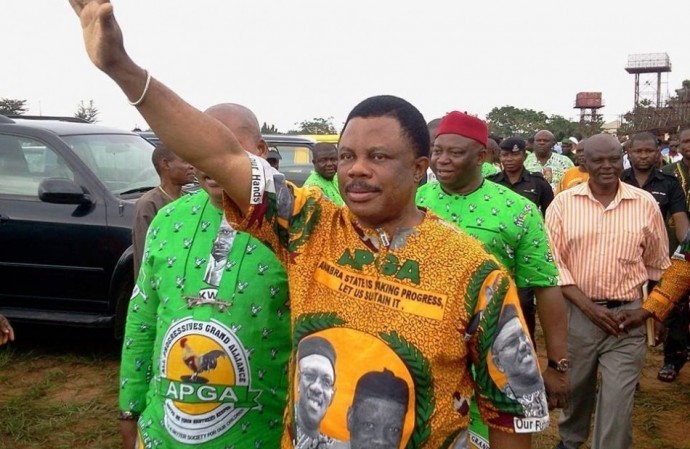 The Anambra State Governor, Chief Willie Obiano, on Saturday, said he had no plans to leave the All Progressives Grand Alliance.

Obiano’s denial followed a media report that he had concluded arrangements to quit the party because of the crisis currently rocking APGA.

The report said Obiano had vowed not to accept Martin Agbaso as the National Chairman of APGA.

It maintained that” A source told APGA Interactive Forum that a meeting was held by all the 21 Transition Committee Chairmen last night.

“Top on the agenda of the meeting was to perfect plans for Obiano to join another party.

“The meeting was prompted by the event at the Enugu State High Court, where Agbaso camp successfully thwarted and dashed the hope of Obiano’s camp from taken over the leadership of the party before primaries.

But speaking through his Senior Special Assistant on media and strategic communications, Mr Oliver Okpala, the governor described the story as the handiwork of detractors, adding that the story was concocted to deceive the public.

His statement read in part, “The attention of the office of the Senior Special Assistant to Governor Willie Obiano of Anambra State has been drawn to a current rumour making waves in the media to the effect that Gov Willie Obiano has now dumped APGA for a new political party yet unknown.

“I hereby state for proper public enlightenment and information that Governor Willie Obiano remains a strong card carrying member of APGA and he still remains the chairman of the party’s Board of Trustees and leader of the party.

“He has never contemplated on the idea of dumping APGA for any other party. He still stands on his unshakable desire and commitment of seeking re-election as governor under the platform of his party APGA.

“This present rumour circulating is no doubt the handiwork of the opposition who has no genuine political programme or economic agenda for the people of Anambra State.

“This rumour is exactly sailing in the figment of the imagination of the opposition. Gov Obiano as a true party man has been working in consonance and solid implementation of APGA agenda and political manifesto and will not relent as his good works for the people of the state have helped his name to be written in golden letters”.