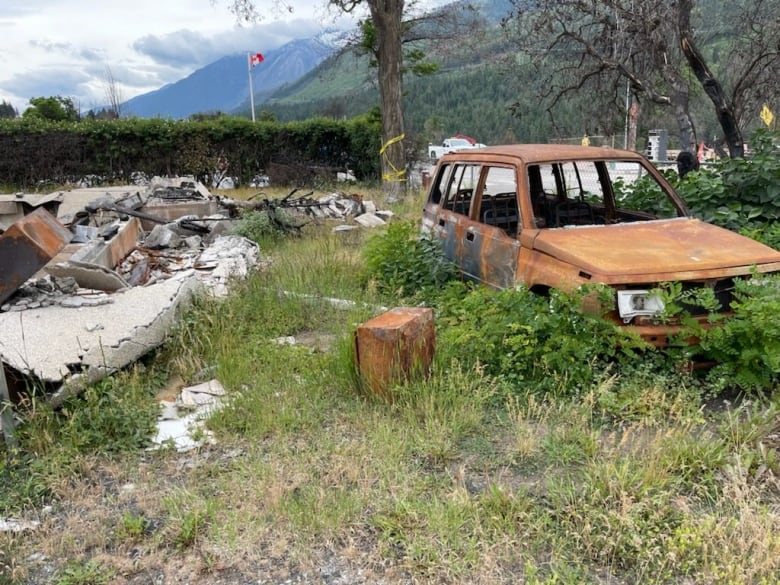 It’s been a year since the residents of Lytton, B.C., and those in neighbouring communities lost everything when a wildfire spread through the village, burning down homes and businesses, and killing two people.

In the days leading up to the fire, the community — home to about 250 people — had set heat records for the entire country, reaching as high as 49.6 C. The grass was dry, and the air was torrid.

In a matter of hours, the town burned to the ground, leaving behind a few structures, mostly charred metal and bricks.

A year later, not much has changed.

Fabian Duncan bounced around from place to place in different communities over the past year, he says. Now he’s back on Lytton First Nation land. The Nation has 56 reserves along the Fraser River, located in and around the Village of Lytton.

Duncan, who saw the fire ignite, says he still struggles with the emotional impact the fire had on him and his loved ones.

“There was smoke everywhere and the flames were knee-high,” he said.

“It was not normal. I just told my buddy that we gotta get out of here.”

He says he hopes everyone who lost their homes will be able to rebuild and return to the area.

“A lot of my peoples lost everything they worked hard for.”

‘I want a home back again’

The cleanup and rebuilding of Lytton has been a slow, arduous process that’s left some residents wondering if they’ll ever be able to return home.

“Why is this not cleaned up yet? Why is this taking so long?” Denise O’Connor asked when she took CBC on a tour last week of what used to be her home.

“I want a home back again.”

After staying in hotels and motels in Kamloops and Merritt, and moving in with her daughter in Quesnel over the last year, O’Connor now lives in her childhood home on the south side of Highway 1, where structures were untouched by the blaze.

But for 30 years before the fire, O’Connor lived in a house in the heart of Lytton.

She says she’s become more involved in municipal council meetings and feels like the community has become a political pawn.

She worries the delayed rebuild is purely bureaucratic.

Rebuild has been ‘frustratingly slow’

The village has said it hopes residents will have access to their properties, or what’s left of them, to start rebuilding by the end of September — about 15 months after the fire.

But Lytton Mayor Jan Polderman expects it could be up to eight years before the community is fully rebuilt.

Lorna Fandrich and her husband, Bernie, plan to rebuild Lytton’s Chinese History Museum, which they opened in 2017.

The couple lost hundreds of artifacts in the fire but say they intend to rebuild as soon as possible.

“One year after the fire, our life in Lytton is quite [different],” Fandrich said.

“For many people, life isn’t that easy. They’re unsure what their future will be.”

Ideally, she says, assessments and demolition in the village will be complete by fall — otherwise the rebuild will have to wait until spring.

“The more time passes between reconstruction and the fire, the more difficult it will be for [residents] to come and resettle in Lytton,” Bernie told Radio-Canada.

He said he’s disappointed with the pace of recovery.

“It has been frustratingly slow.”

Earlier this month, the federal government announced $77 million to go toward rebuilding the village, including more fire-resistant buildings.

The provincial government has committed more than $49 million to the rebuild. Public Safety Minister Mike Farnworth expects rebuilding to commence in September this year.

Polderman has said that without that public funding for infrastructure, a rebuild would be “impossible.”

“The last year hasn’t been a pleasant experience,” Polderman said.

“I don’t think anyone has the experience or expertise to deal with a situation like ours.”