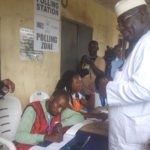 Candidate of the All Progressives Congress in today’s Osun West Senatorial bye-election, Senator Mudasiru Hussain, has described the exercise as peaceful and smooth.

Shortly after casting his vote at Ward 3 unit 1 of Ejigbo Local Government, he commended the peaceful conduct and impressive turn out of the electorate.
According to him, the system of simultaneous accreditation and voting adopted by the Independent National Electoral Commission showed that the umpire is improving on the electoral processes.
Hussain was optimistic that his party would triumph.

The candidate of the Peoples Democratic Party in the bye-election, Ademola Adeleke, younger brother of late Senator Isiaka Adeleke, also expressed optimism of victory in the poll.

He arrived his polling unit, Ward 2, Unit 9 Abogunde Compound in Ede North Local Government around 8.30 am and voted 8.34am after he had been screened and accredited.

He said he was satisfied with the process so far, adding that his participation in the poll was a shower of blessings.

Meanwhile, the early morning drizzle did not prevent voters from going to their polling units to vote.

The turnout was not impressive  in most polling units except Ward 7, Unit 5 Olorin/Olode in Ede South as many people to came out enmass to exercise their civic duties.

However, the voters complained that ballot papers for the unit was incomplete.

The presiding officer for the unit, Vera Umejeih, confirmed that the ballot papers were not complete, saying they received 544 instead of 547 ballot papers.

A PDP chieftain, Alhaji Kamoru Olagoke, from Unit 7,  Sabo Agbongbe 1 Ward 6, said the process was going on smoothly, adding that the impression that the turn out was poor was because voters do their accreditation, screening and voting  at once and many of them leave after the exercise.

Also at Oloba Atapara Ward 1 Unit 10, the exercise was described as satisfactory by voters. They acknowleged excellent performance of the card reader machines and enough electoral materials.