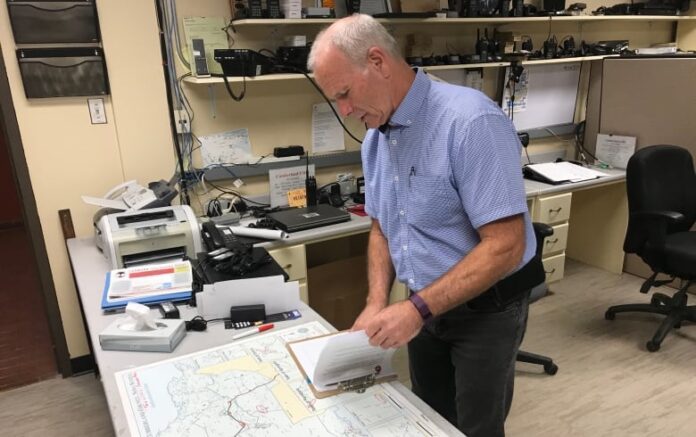 As the season for Atlantic hurricanes starts in earnest, people who live on the border between New Brunswick and Nova Scotia have their fingers crossed they won’t take a direct hit.

The lowland area on the provincial border has long been considered at risk of flooding which could cut important transportation links in Atlantic Canada.

The second named storm of the 2019 season is expected to move through Atlantic Canada this weekend, as Hurricane Dorian moves north after stalling over the Bahamas. Dorian is following close behind post-tropical storm Erin, which brought heavy rains and washouts to northern Nova Scotia and P.E.I. on Aug. 29.

The concern is so great that regional emergency measures co-ordinator Mike Johnson has been spending his summer walking door to door around Amherst, N.S., gathering contact information and preparing people in case of an emergency evacuation.

“I’ll lose probably 10 or 20 pounds,” he told CBC News of his rounds. Johnson estimates he has to canvass between 80 and 100 homes between the communities Amherst, Maccan, River Hebert and Joggins.

“Not all of these homes are subject to flooding. Some of them might be just subject to the fact that they got cut off because the roadways are flooded by water,” he said.

Johnson’s determined to leave no one behind. He doesn’t check a home off his list until he has spoken to a resident at their door and made sure he has up-to-date contact information.

“That’s about the only way we can get this information. Email addresses and phone numbers aren’t something that’s so readily available just based on viewing a home on a map,” he said.

“It’s labour intensive collecting this information, but once we do have it, it can be very beneficial when the time comes.”

His property is part of the lowlands that farmers reclaimed from tidal marshes using an ancient drainage system, some of which was first constructed by Acadian settlers in 1671.

“Most of my land is protected by dikes and aboiteaux [sluices]. Ninety per cent of my farmland is marshland,” he said.

“There’s a lot of history to that, how that marshland got developed, how fertile that soil is, and why we should be protecting it.”

Fields around Bacon’s farm have flooded so many times in the last 20 years he’s lost count. Once, some of his cattle got stranded in a field.

“They stood there in water, up to their bellies. I couldn’t get them off,” he said. Bacon recalls taking hay out to his cows in a canoe, and throwing the bales to them as they stood in the water.

People who live in the area might feel the effects of flooding first, but they are far from the only ones.

The area, which is known as the Chignecto Isthmus, contains infrastructure that’s critical for all of Atlantic Canada.

That low-lying point holds the convergence of the Trans-Canada Highway, the main CN Rail line, and power and telecommunication lines that leave New Brunswick and carry on to Nova Scotia, Newfoundland and Prince Edward Island.

Freight from the Port of Halifax is carried over that link to the rest of Canada. A study done using money from Natural Resources Canada found about $50 million of trade travels across the link every day.

This fall, a joint project funded by the federal government, New Brunswick and Nova Scotia will start looking for a way to protect the isthmus from a 100-year storm.

It’s being led by the New Brunswick Department of Transportation and Infrastructure and seeks to raise the dikes from an average height of 8.5 metres to 11.2 metres. The project is in the initial stages, with the goal of choosing the engineering solution sometime in 2021.

Mike Pauley, a manager with that department, is overseeing the work. He says building on the mud flats in the area is a difficult “art.”

“The art form being that the majority of the material that’s in place out on these mud flats is actually some of the best materials to help build these dikes,” he says. “But it’s also very unstable, so if you don’t do it correctly it won’t work out for you.”

A federal environmental impact assessment would be required before building starts. That could take two years and makes it unlikely that construction could start before at least 2023.

In the meantime, Bacon watches the weather for the approach of storms and hurricanes, and hopes the big one holds off.

“It’s not only my concern, it’s the concern of the farmers. I’ve stated many times the value of this marshland and why it needs to be protected,” he says.