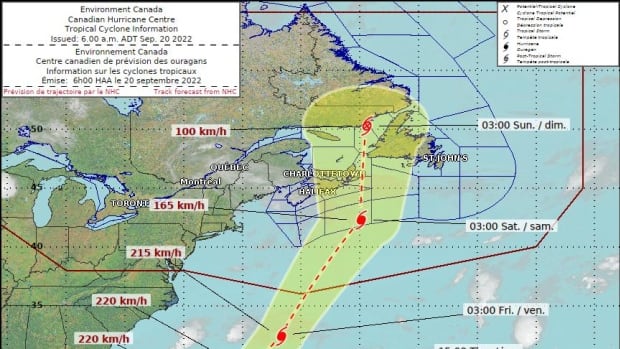 The Atlantic provinces could be hit hard by Fiona this weekend, which is currently a Category 3 hurricane.

“Yesterday it looked like it was going to stay off the coast of Atlantic Canada, today it’s moving back to the west and the latest track puts it somewhere in the Gulf of St. Lawrence,” said Simpkin.

“If it stays on this track early Saturday morning some of the models are indicating it’s going to be strong, possibly maintaining hurricane strength moving into the Gulf of St. Lawrence.”

Forecasts are still early, she said, and the track could change again.

As it stands, the hurricane is due to enter Canadian waters early Saturday morning, and pass by the eastern tip of Cape Breton around midday.

The powerful hurricane has already caused widespread damage in the Dominican Republic and Puerto Rico.