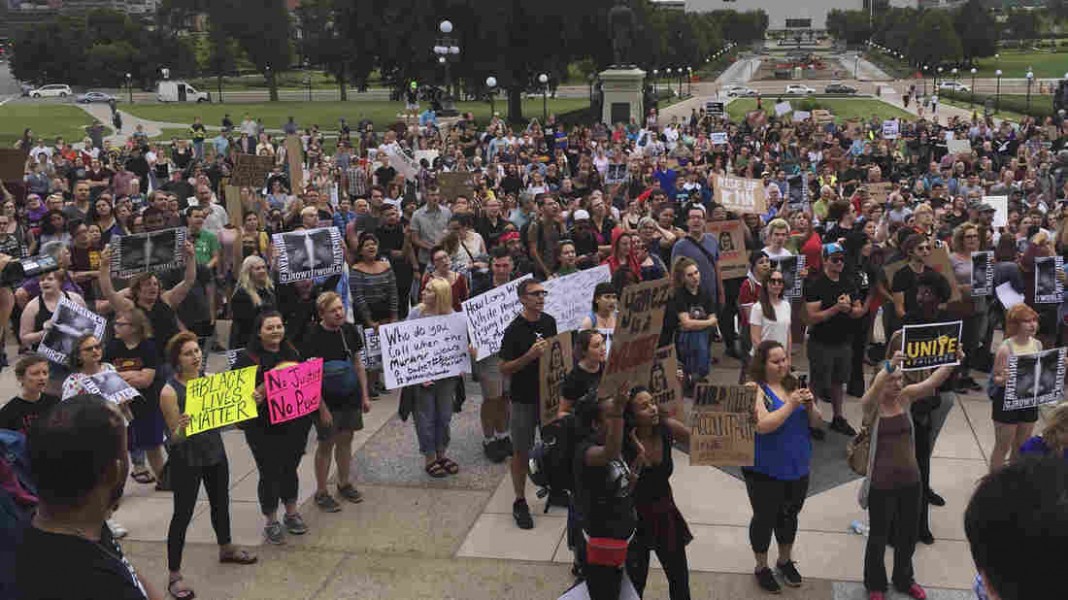 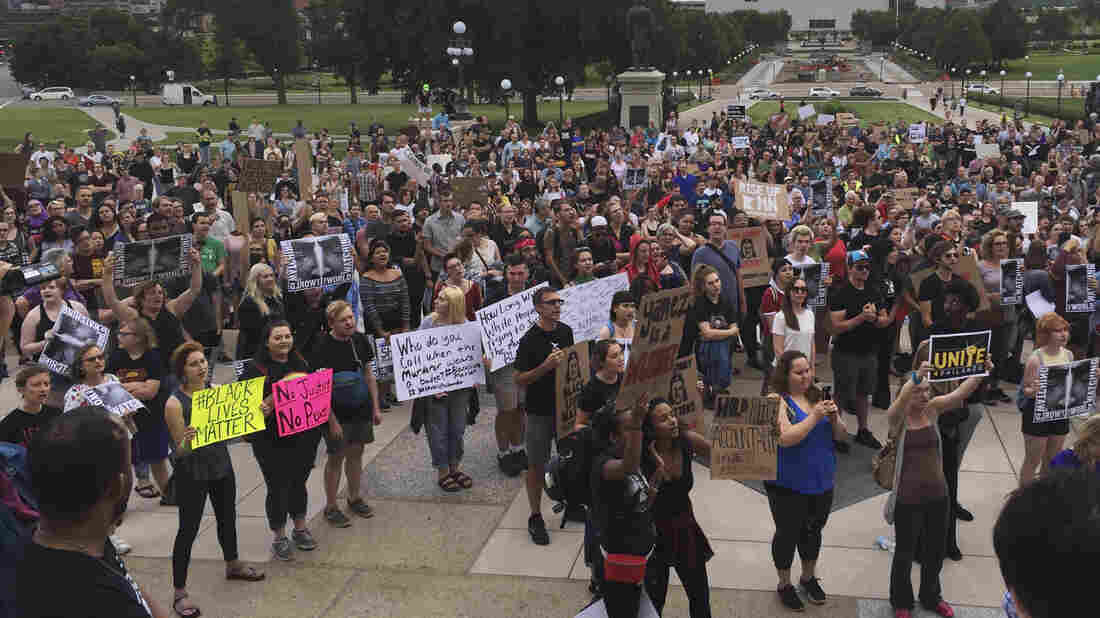 Protesters gather outside the Minnesota State Capitol in St. Paul, Minn., on Friday.

Hundreds of people gathered in St. Paul, Minn., Friday evening to protest a verdict that found a Minnesota police officer not guilty on all counts in his deadly shooting of a black man during a traffic stop in 2016.

Demonstrators gathered at the Minnesota State Capitol holding signs that included the phrases “black lives matter,” and “no justice, no peace,” and hundreds marched toward the nearby Cathedral of Saint Paul.

Some of the protesters that the Minnesota State Patrol estimated to be about 500 people made their way onto Interstate 94 and blocked traffic for more than an hour. Shortly before 1 a.m. Central time, the State Patrol tweeted that they were arresting protesters “who failed to leave the roadway.” Police had mostly cleared protesters from the highway after midnight, according to The Associated Press, and protests were largely peaceful.

After five days of deliberations, the jury found Officer Jeronimo Yanez not guilty of all counts in the July 2016 shooting of Philando Castile in Falcon Heights, a suburb of St. Paul.

“The system continues to fail black people, and it will continue to fail you all,” Valerie Castile, Philando’s mother, told reporters after the verdict. “My son loved this city and this city killed my son and the murderer gets away. … I’m mad as hell right now.” 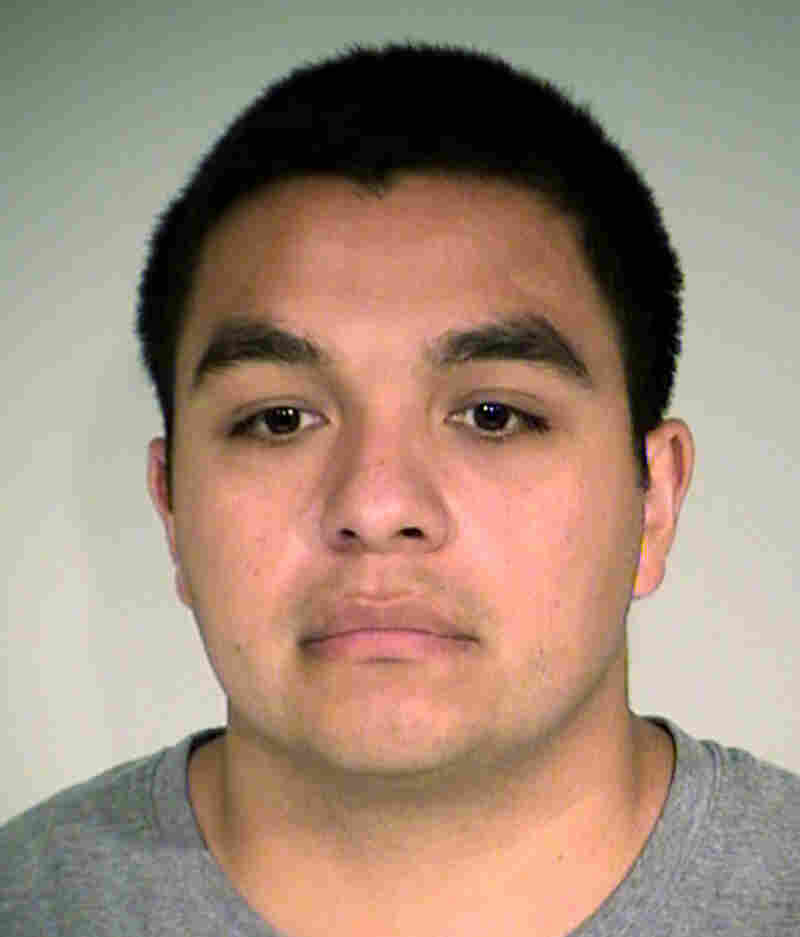 Castile’s sister Allysza, weeping, said, “He didn’t deserve to die the way he did, and I will never have faith in this system.” Castile family lawyer Glenda Hatchett vowed to continue fighting.

Castile, a 32-year-old school cafeteria worker, was driving with his girlfriend and her 4-year-old daughter when they were pulled over by St. Anthony police Officer Jeronimo Yanez.

Yanez was charged last November with one count of felony second-degree manslaughter in Castile’s death. He also faced two felony counts of intentional discharge of a dangerous weapon over allegedly endangering Castile’s girlfriend, Diamond Reynolds, and her daughter. He pleaded not guilty.

“Yanez stared ahead with no reaction as the verdict was read,” the AP reported. “Afterward, one of his attorneys, Tom Kelly, said the defense was ‘satisfied.’ “

The City of St. Anthony said after the verdict that Yanez “will not return to active duty.” In a statement, the city said that it “has concluded that the public will be best served if Officer Yanez is no longer a police officer in our city.” It said that Yanez would receive a “voluntary separation agreement.”

The incident drew national attention when Reynolds started live-streaming the immediate aftermath of the exchange on Facebook, as Castile lay dying and her daughter sat in the back seat.

“In the stream,” as The Two-Way reported, “she said Castile was stopped for a broken taillight, had notified the officer that he was licensed to carry a handgun and was reaching for his wallet at the officer’s request when he was shot.”

The video was a crucial piece of evidence during the trial, along with dashcam video from the police vehicle. As MPR reported, jurors requested to review both of these videos again Tuesday during their deliberations.

Yanez’s defense attorneys also maintained that Castile was high at the time of the shooting.

However, the member station adds that prosecutors “say Yanez never saw Castile’s gun, never told officers who responded to the scene or to his police dispatcher that there was a gun[, and that he] shot recklessly, killing Castile.”

The shooting last July sparked protests, as we reported, and Minnesota Gov. Mark Dayton described the incident and its aftermath as “absolutely appalling at all levels.”

Castile was said to know the names of all 500 students he worked with, and after the verdict St. Paul Public Schools said the verdict “may bring strong emotions” for those who knew “Mr. Phil,” whom they describe as a “beloved SPPS employee.” The school district said it was making counselors available for students and staff over the summer.