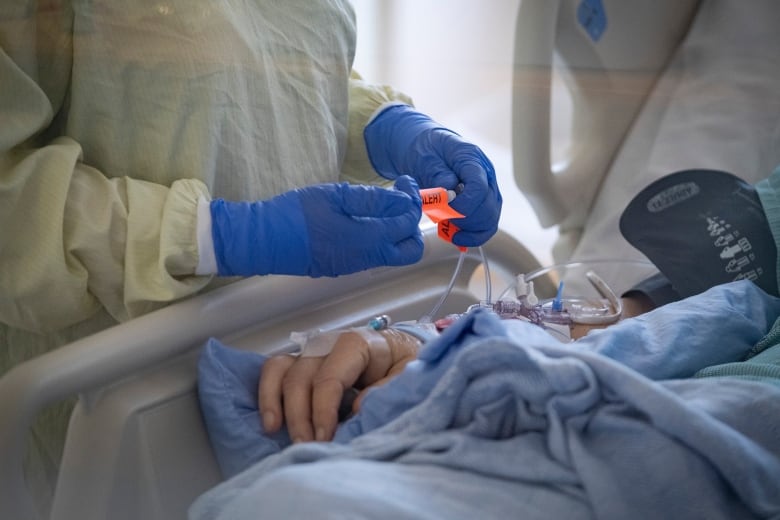 Sometimes that means transferring those critically ill patients to other sites in the GTA. On other occasions, it means sending them as far away as Hamilton or London, Ont.

And while the raw numbers seem small, the Humber River Hospital clinician said these transfers add up to a “significant” number of patients — all to ensure the 48-bed unit in a hospital located in one of Toronto’s hardest-hit areas doesn’t become overwhelmed.

“We’re probably getting one to five patients a day on average with COVID. It’s manageable, but if it goes beyond five to ten patients, or even 15 patients and we’re admitting patients to the ICU every day, that’s obviously not a sustainable model,” Spiegelman explained, adding his unit has been running at close to full capacity for months.

“We’re all concerned that we don’t have enough resources if it does explode.”

Transfers on the rise

“We’ve been moving a number every single day, and so those numbers add up very quickly,” said Dr. Andrew Baker, who’s at the helm of Ontario’s Critical Care COVID-19 Command Centre.

Baker told CBC News his team has tallied approximately 168 COVID-19 critical care patients that were moved among various hospital sites between early January and mid-March — an average of a couple each day — and in just the last week, that rate has increased.

Figures provided by Ornge, Ontario’s non-profit air ambulance provider, show an even larger number of overall patients, including those with other illnesses and conditions, were moved between critical care sites in recent months — totalling nearly 600 since the beginning of December.

That month, Ornge and local paramedics transported a combined total of 43 patients between hospital sites.

The tally jumped to 206 in January, 217 in February, and so far in March, at least 124 patients have been moved around.

“In the last 36 hours, we’ve transferred five patients out of our institution and completed our first air evacuation out to Kingston, which we hadn’t done before,” said Dr. Martin Betts, chief and medical director of the Scarborough Health Network’s critical care program.

“In a lot of ways, it’s to set us up for what we think will increase in the weeks ahead, to give us access to ventilators.”

Patients are almost exclusively being transferred across Southern Ontario, but this month, nine people were sent down south from Thunder Bay, a COVID-19 hot-spot, the Ornge data shows.

“In Northern Ontario, there are only around 90 or so critical care beds,” explained Anthony Dale, head of the Ontario Hospital Association, during a recent interview with CBC News. “And Winnipeg is closed to non-Manitoba patients.”

The increase in patient transfers is happening while virus variants capable of causing more severe illness are circulating widely in Ontario, and thought to be contributing to the province’s third wave of COVID-19 cases as restrictions are being loosened in various regions.

There’s also been little respite for ICU teams after the number of patients battling the disease in their units hit a high of 420 in January, alongside all the other patients admitted for other conditions, according to data obtained by CBC News from Critical Care Services Ontario (CCSO).

“We’re really probably only a few days away from eclipsing that critical care burden,” Betts said.

The numbers barely dipped before starting to rise again to the latest tally of 383 — quite unlike the long summer lull in admissions before the second wave.

“Most ICUs are at or approaching capacity,” said Dr. Michael Warner, a critical care physician at Michael Garron Hospital. “Although there may be beds, there aren’t enough staff to staff the beds that are available, including the surge beds made available by the government.”

Another challenge, according to clinicians, is how long COVID-19 patients stay.

And plenty of others wind up in intensive care for far longer, with some patients still in hospital weeks after the second wave of admissions in the fall, and even months after wave one ended last August.

“There are three patients in Ontario’s ICUs with COVID-19 who are still on a ventilator from the first wave,” Warner said, citing the latest figures from CCSO.

“And length of stay is increasing, which is part of why the number of cases in Ontario’s ICUs with COVID-19 is going up as well.”

Many of the Canadians most vulnerable to COVID-19 have been vaccinated, but the majority of younger Canadians remain unprotected and hospitals are seeing the consequences. 2:05

“The strategy behind the patient transfers is to make sure the hospital has enough critical care resources for anyone who comes to hospital, for any reason,” noted Betts. Ontario hospitals are still struggling with a massive months-long backlog of non-COVID-19 surgeries and appointments, he added.

But it also means transferred individuals — including some who may be close to death — are sometimes suddenly hours away from loved ones, adding another complication for families during a pandemic already marked by social isolation.

“All of us feel the family story behind each of these. These are not numbers to us,” Baker said.

For Spiegelman, patient transfers are among the strategies keeping his ICU functioning, at least for now.

What’s even more concerning than the raw numbers of admissions and transfers, he said, is who’s showing up in the first place: younger, sicker patients, more frequently than earlier in the pandemic.

“When a 30 or 40-year-old comes into the ICU and I have to put them on life support, it’s much different from an 80-year-old nursing home patient who’s lived their whole life,” Spiegelman said.

“I am concerned about the age demographic that we’re seeing getting sick at this point — and it’s very possible the numbers will keep going up.”