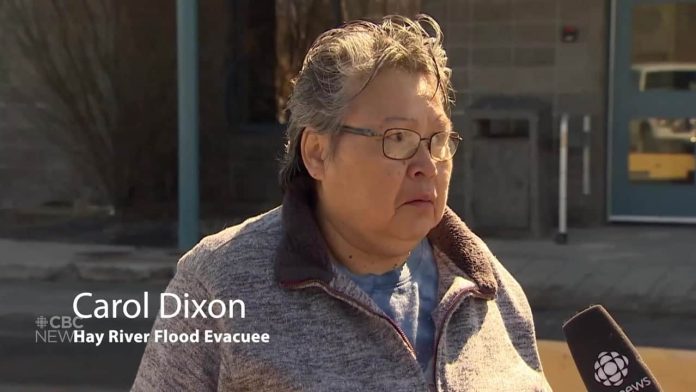 As Hay River and the K’atl’odeeche First Nation brace for more surges of floodwater and ice, N.W.T. officials say they have room in Yellowknife and Fort Smith for hundreds more evacuees.

Nearly 3,800 people were ordered to leave the communities late Wednesday after water surged over the banks of the Hay River close to where it meets Great Slave Lake. The river was high enough to flood Hay River’s downtown core, built in an area expressly chosen to avoid flooding, particularly after a terrible flood in 1963.

An unknown number of residents are staying in Enterprise or have headed further south.

Gareau said there are 660 cots available at the multiplex. Additionally, Fort Smith is ready to receive up to 50 people. There are also hotel rooms available for people who need them for medical reasons. 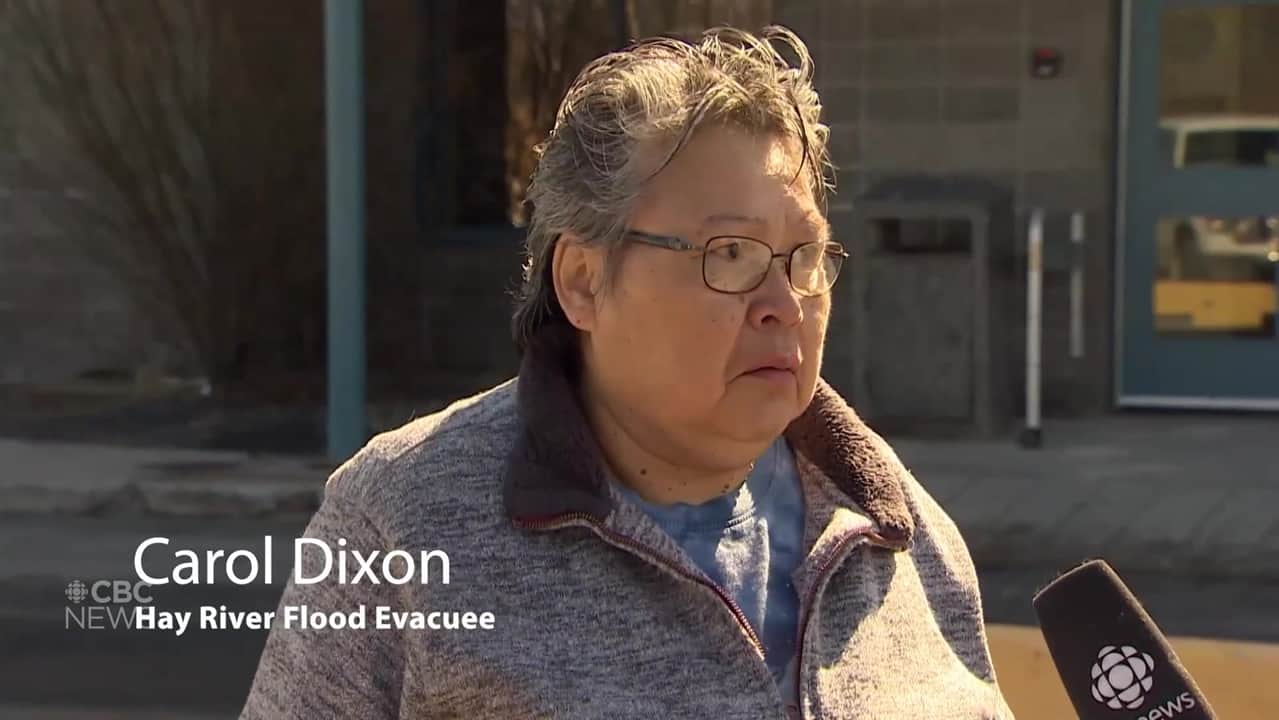 Carol Dixon and her husband escaped the Hay River flood. They raced through the rushing water to find safety in Yellowknife. She spoke with the CBC outside Yellowknife’s multiplex.

She said the government is urging people who escaped the flooding to register by calling 833-699-0188 — even if they’re staying with family or friends — so the emergency management organization knows where people are, what they need and whether assistance is available.

She said right now, the government and communities “do not have the capacity to physically find people.”

“A current issue for [the emergency management organization] is we are uncertain on how many evacuees to actually expect in Yellowknife,” Gareau noted during a press conference Thursday afternoon.

Missed the update? Watch it here:

It came after both South Slave communities issued evacuation orders Wednesday night due to major flooding along the Hay River. Emergency workers were out Thursday morning assessing the situation and coming up with their next steps.

Many residents fled to Enterprise or south into Alberta, while others drove north to Yellowknife.

Surrounding communities have been offering aid.

The territory has spent the past year updating its disaster assistance policy and plans to hold a technical briefing Monday on the changes.

Thompson said the new policy will apply to the current flooding situation.

There are clear rules residents should be aware of, he added, which make it important for them to check in at evacuation centres. The territory will cover the costs of hotels if it decides a resident needs to be put in one, but not if they decide on their own to get a hotel room.

“We have to be very clear that evacuation centres are where we want people to go,” he said.

Once recovery efforts start, the territory will provide “pathfinders” to help community members navigate the disaster assistance policy and get them the help they need to rebuild.

Gareau said local emergency management organizations in Hay River and K’atl’odeeche First Nation are leading the emergency response, but territorial help is available if they need it.

Once it’s safe to enter those communities, territorial staff will head there to work on recovery efforts.

She said if it’s needed, the territory is prepared to ask for military aid.

But Thompson said the priority right now is to make sure everyone is safe, before switching focus to recovery.

He said the work from staff in Hay River and K’atl’odeeche has been “bar none.”

When it comes time to rebuild, Thompson noted community governments will take the lead on that, too, and will make the ultimate decision on moving any infrastructure.

Cochrane said there’s a fine balance between supporting communities and forcing them to change, pointing to a time when the territorial government tried to move Aklavik into Inuvik.

“People in Canada have freedom of mobility and we all have to respect that,” she said.

In an update at 2 p.m. officials with the Town of Hay River said there is still a “significant ice jam” inside the north end of Hay River’s boundaries, with ice packing the river from both channels to Delancey Estates.

Water levels are rising again and more flooding is expected.

Only emergency and essential services are being allowed into the community.

The town’s wastewater system has been “heavily compromised,” it stated, and more than half of residents no longer have functioning sewer pipes.

Several roads have washed out or are under ice and water.

The water treatment plant and other areas of Hay River are without power, and the airport — which is largely underwater as well — is only available for emergency services.

The town said it will start shifting to recovery activities after the risk from the river breaking up goes down.