Hundreds march in Windsor to show solidarity with U.S. protests and to honour George Floyd 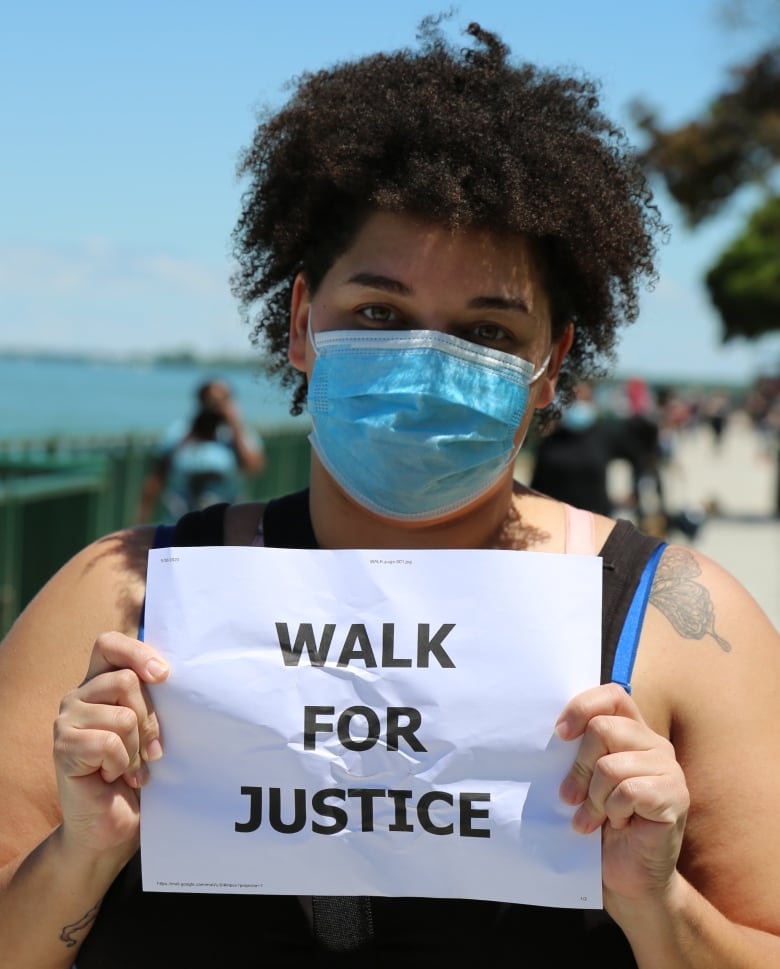 Hundreds of people made their way along the Windsor riverfront Sunday afternoon and turned their intentions across the Canada-America border to show their solidarity with protests happening in the U.S. in the wake of the death of George Floyd in Minnesota.

“They had nowhere to place this fear, the anger, the hurt in their heart so we’ve come together and said, ‘Let’s do a pleasant, peaceful walk.'”

Floyd died after being taken into police custody last Monday. A video shows Derek Chauvin, a white police officer, pressing his knee into the back of Floyd’s neck as he pleaded for air. Chauvin has since been charged with 3rd degree murder. The incident sparked large protests in Minnesota and across the U.S. including in Detroit.

“It’s disheartening, it’s dehumanizing, so I’m trying to make sure that my voice is heard not only in the states but also in Canada,” Flo Bandi said.

Courtney Henderson said she wishes she could have crossed into Detroit to be with protesters there.

“We’re here because of George Floyd and we want to remember him as the human being that he was,” Henderson said.

“It’s important to me because I see innocent people losing their lives at the hands of police — hands of systemic oppression and institutionalized racism and it doesn’t just happen in America, it happens here in Canada.”

Most wore masks and were asked to keep distance from one another as they made their way west down Riverside from Ouellette Avenue toward the Ambassador bridge for several kilometres and then back.

“We want them to know we’re a part of you, we’re right across the river,” Hurst said, as she gestured at city of Detroit skyline.

“We support what’s happening. We support anti-racism… we’re all here together, we’re very diverse here as you can see which is beautiful — that’s what Windsor is all about.”

Tony Anderson grew up across the water in Detroit. He said he was harassed by the police when he was in the army in the 90s. He said he would have to choose which route he would take home from work to avoid the police.

“Which night were we going to be lucky where we’re going to miss the police so we wouldn’t get harassed,” Anderson said.

“I understand the frustration.”

The march ended with a moment of silence in honour of George Floyd as well as with chants of “say his name” answered with “George Floyd” chanted in the direction of the Detroit City Skyline.

“They need to see that we care about them just as much as they care about us,” Keisha Pauze said.