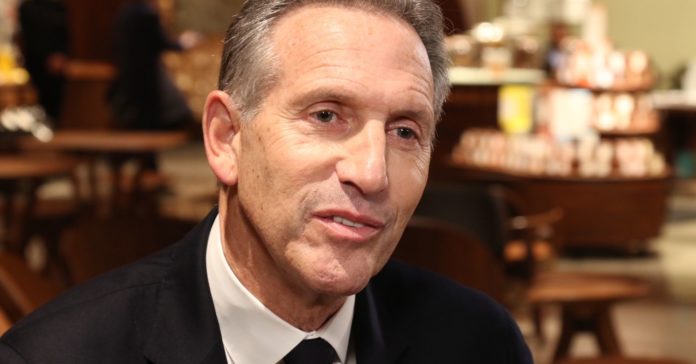 Former Starbucks CEO Howard Schultz said that he wasn’t listening to those who said that a potential presidential bid as a “centrist independent” could boost President Donald Trump’s re-election chances.

“Nobody wants to see Donald Trump removed from office more than me,” Schultz said Monday night during an interview with CNBC’s Andrew Ross Sorkin in New York City that was interrupted by sporadic outbursts from protesters.

Sorkin asked Schultz what he would do if it appeared in the polls that his presidential bid, if he launched one, would assist Trump’s electoral odds.

“If I decide to run for president as an independent, I will believe and have the conviction and the courage to believe I can win,” Schultz said. “I can’t answer that question today. But I certainly am not going to do anything to put Donald Trump back in the Oval Office.”

Schultz faced a battering earlier in the day from top Democrats and political strategists, who criticized the billionaire for pursuing a long-shot campaign that some described as a vanity project.

A lifelong Democrat, Schultz said on Monday that he no longer identifies with the party because he sees it moving too far to the left on issues including government spending and health care.

One high-profile, if indirect, criticism came from Michael Bloomberg, the former mayor of New York, who has belonged to both the Republican and Democratic parties and has been floated as a possible presidential contender in 2020.

“Given the strong pull of partisanship and the realities of the electoral college system, there is no way an independent can win. That is truer today than ever before,” Bloomberg said in a statement that did not mention Schultz by name.

“In 2020, the great likelihood is that an independent would just split the anti-Trump vote and end up re-electing the President. That’s a risk I refused to run in 2016 and we can’t afford to run it now,” the statement said.

Schultz said that he had “tremendous respect” for Bloomberg, “but I don’t agree with his conclusion.”

“Most people don’t realize that about 42 percent of the electorate affiliate themselves as an independent,” Schultz said. He said that his own analysis was based on “facts, not things that are made up.”

“I also believe that there are lifelong Democrats and lifelong Republicans who would likely want to find a new home.”

Political scientists largely disagree with the idea that a large portion of the American electorate is made up of independents, or those who vote for candidates of different parties in different cycles.

Larry Sabato, an elections expert and the director of the Center for Politics at the University of Virginia, estimates the true number of independent voters is somewhere south of 10 percent, despite nearly 40 percent identifying that way.

“Tons of research has been done on this,” Sabato said. “I personally think independents are under 10 percent. Others make the argument that it may be 12,13, 14 percent. Okay. 40 percent? Get real.”

Schultz also addressed criticism lobbed his way from Trump, who goaded the coffee mogul in a morning tweet. Schultz called the taunt “childish.”

“I think President Trump is a very insecure man,” Schultz said later in the interview. “And that insecurity is manifested with all these attacks, which I view as weakness, not strength. We are not going to get in the mud with him.”