How wearing a kokum scarf is supporting Ukraine 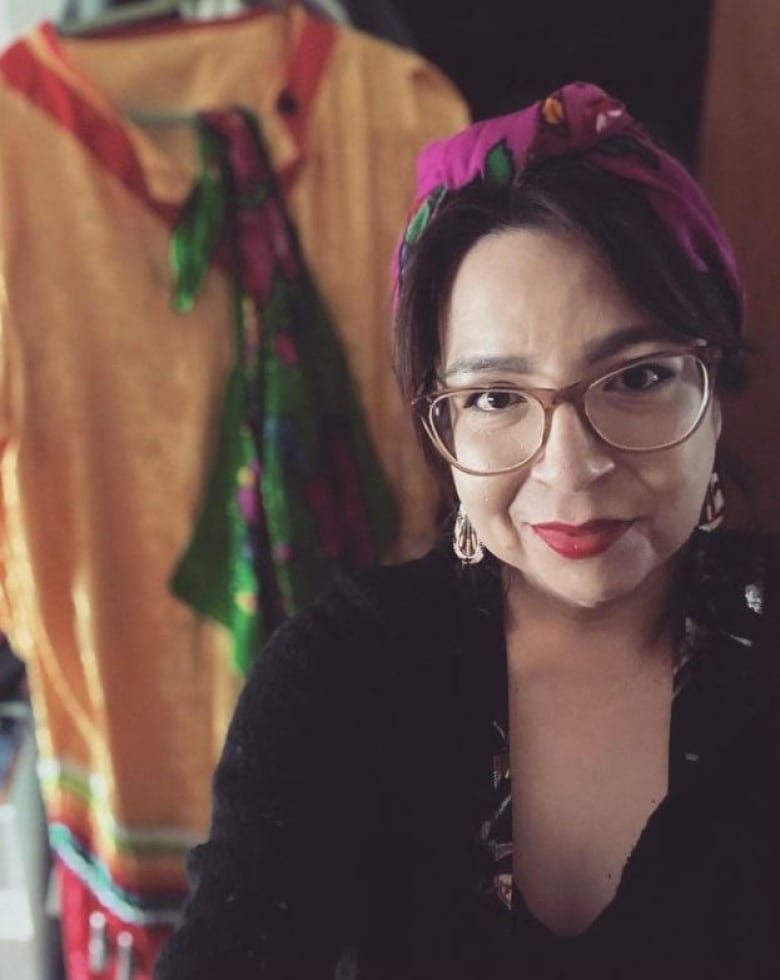 Some Indigenous people in northern Ontario are honouring Ukraine by wearing a traditional scarf.

Heidi Manitowabi, an Anishinaabe woman living in Sudbury is one of them. She’s been wearing a kokum scarf. It’s a piece of cloth used in powwows by jingle dancers “as a method of prayer while they’re dancing.” It can also be used as a fashion or statement piece.

“Women wear it on their heads or around their necks,” she said.

“The kokum scarf represents strength, empowerment and resilience among our people.”

Russia’s invasion of Ukraine is now in its sixth day. It has been pounding civilian targets in Ukraine’s second-largest city of Kharkiv, and a convoy of tanks and other vehicles continues to threaten the capital, Kyiv. Throughout the country, many Ukrainian civilians spent another night huddled in shelters, basements or corridors.

Manitowabi said the scarf dates back to when Ukrainian immigrants were first settling in Canada in the late 19th and early 20th centuries. She said many from the Ukraine settled in the Prairies and developed relationships with local Indigenous people.

“Through friendship and through influencing each other, trade started happening,” she said.

“The Ukrainians would trade their stitch work for the local Indigenous beadwork and vice-versa.”

Manitowabi said the stitch work became “influenced by the floral designs of the Indigenous people.”

“Thus was born the kokum scarf as a sign of respect for each other,” she said.

Manitowabi said for her, Ukraine is very important as she spent three months there after graduating high school. She said she still has friends in Kyiv, who are afraid for their lives.

“This is very, very close to my heart,” she said.

“Not only do I have a personal relationship with Ukraine, but I also wanted to make that reminder, have that reminder for our people of our relationship with Ukraine. With everybody who’s wearing the kokum scarf, who uses it for prayer, who uses it for dance, we need to acknowledge and honour where the kokum scarf had come from, and it’s from our Ukrainian friends.”

She said when she wears the scarf, she feels a sense of pride

“I’m wearing my kokum scarf right now and it feels like I’m doing something, like I’m creating awareness and I’m starting a conversation,” she said.

“I’m letting my friends in Ukraine know they have my support.”

Anishnaabe artist and educator Will Morin said the scarf is traditionally worn by women.

“How important it is that we need to hear and listen to our women, our grandmothers,” he said.

“And when we look at the situation that’s happening in Ukraine, it’s truly an indication that the men are not listening to the women.”

Morin said Canada’s history is based on the relationship between settlers and Indigenous people.

“We understand as a people of this land how important it is that we need to share in order for us as collective cultures that make up Canada for us to survive,” he said.

“And how important it is to be reminded that Canada is a country but it is on Indigenous land and how Indigenous peoples continue to demonstrate that honour and respect for the land.”