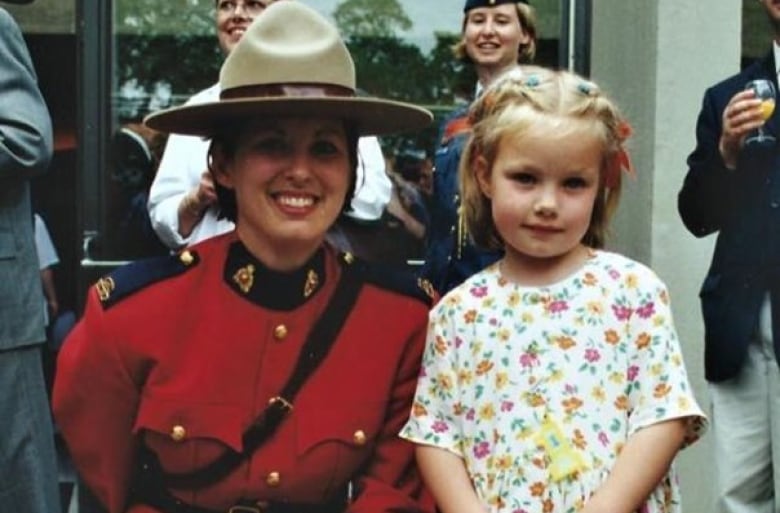 Avon Brophy presses a hand to her heart and looks at a photo of a young Dutch girl, standing with a grinning RCMP officer in red serge.

Twenty-two years after that photo was taken, Brophy sits on a bench alongside Mara Wienke, the same little girl — now a young woman.

Stevenson was among the 22 people killed in the mass shooting in Nova Scotia on April 18-19, 2020, when a gunman travelled across the province in a mock RCMP car.

Brophy and Wienke are now building a unique friendship after the loss of Stevenson, who was killed by the shooter in Shubenacadie after wounding him in a gunfight.

Just a few days after the tragedy, Wienke shared the photo of her and Stevenson taken in 2000, and wrote a letter to Stevenson’s family that was shared widely on Facebook.

Wienke was five years old when she and Stevenson met at a commemorative event to mark Apledoorn’s liberation by Canadian troops in the Second World War.

She told her story to CBC News and talked about how Stevenson seemed like a hero to her. Wienke said Stevenson gave her so much time and attention, even though they didn’t speak the same language.

Brophy, who lives in Cole Harbour, N.S., said among the outpouring of condolences and stories about Stevenson from around the world, Wienke’s photo and story has stuck with her.

“It’s just one of the most beautiful photos I’ve ever seen. And, you know, one of my very favourite photos ever,” Brophy said alongside Wienke recently at the Cole Harbour Heritage Farm Museum, a favourite place of Brophy’s.

“I don’t think anybody can look at it without being moved. You know, this shy, beautiful little girl and Heidi on her knee, you know, at eye level, talking to her … it was very special.” 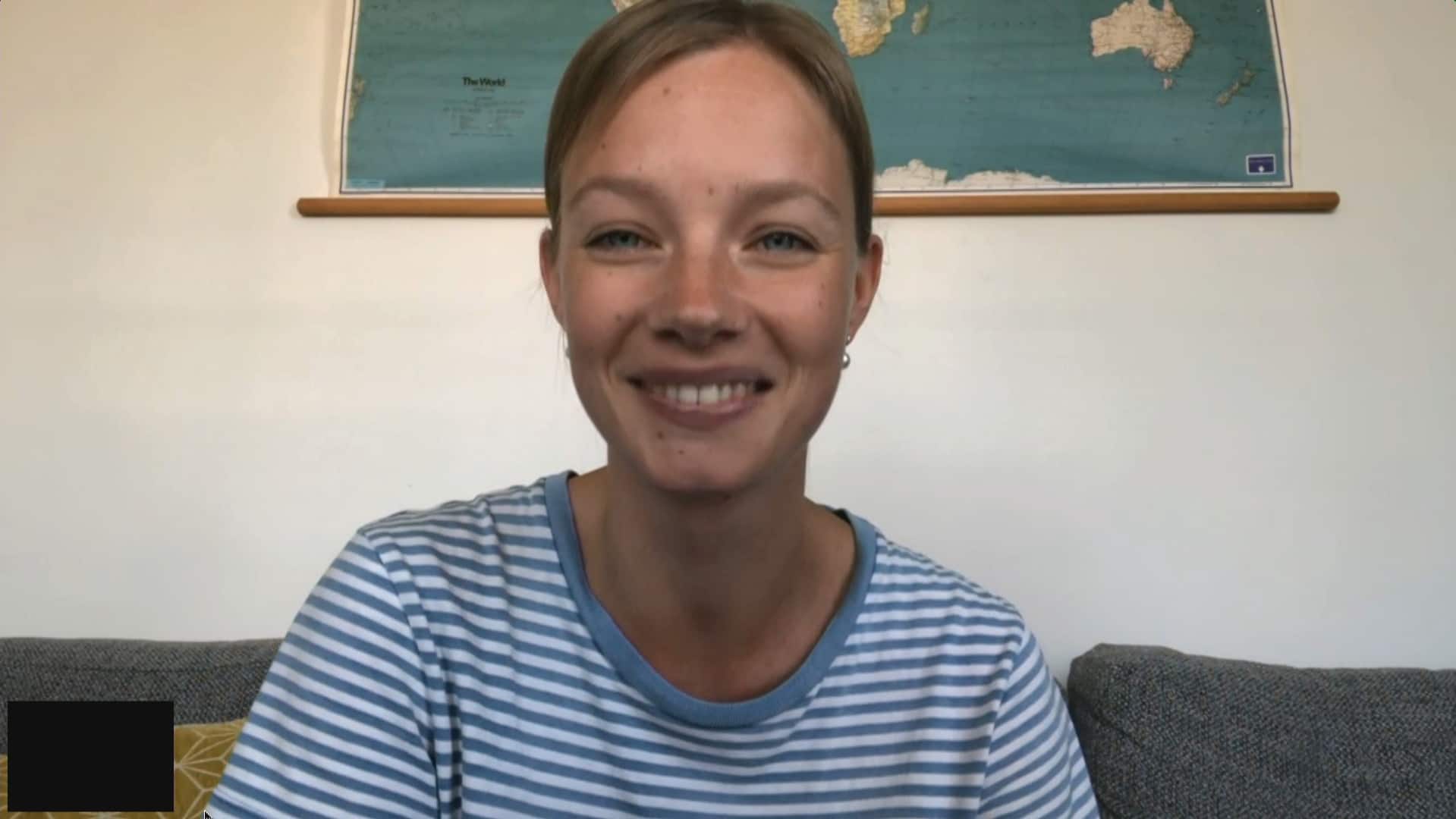 Const. Stevenson ‘was a superhero’ to Dutch girl 20 years ago

Mara Wienke met Const. Heidi Stevenson during an RCMP trip to Apeldoorn in 2000 to commemorate the liberation of the Dutch town by Canadian troops during the Second World War.

After seeing the photo, Brophy said she decided Wienke should be at Stevenson’s regimental memorial service, whenever it happened. Brophy looked Wienke up online, and the two connected.

At the time, Wienke said she was just happy her fond memories of Stevenson had reached the officer’s family, and didn’t expect anything else.

But then a couple of months ago, Brophy messaged Wienke again and asked her to attend the memorial. It took place on June 29, after about two years of delay due to the COVID-19 pandemic.

When Wienke explained to her own friends why she was heading to Canada, there was no short way to do it. She said it always took a few minutes to explain who Stevenson was and how she died.

“By the time I’m finished, people would just look at me and blink a couple of times to be like, ‘Wow, I’ve never heard something like that,’ or ‘So, now you’re just gonna go?'” Wienke said.

One of Brophy’s friends chipped in with flight plan miles to bring Wienke over from the Netherlands, and a two-week plan was set to give the 27-year-old lots of time to experience Nova Scotia and meet Stevenson’s friends and family.

Wienke arrived in Halifax early one morning around 4 a.m. local time after various flight delays, and Brophy was up waiting with homemade chocolate chip cookies.

Despite the international nature of their connection, Wienke said the more important thing is their shared foundation of Stevenson. She added they didn’t feel like strangers when they met because they’d already been talking so much about her.

“We just hugged, it was just wonderful. It was like meeting a family member for me … I consider her an honorary granddaughter. You know, she’s part of my family forever,” Brophy said with a smile at Wienke.

“I do feel part of the family,” she said.

After the visit and memorial where some of Stevenson’s friends shared their favourite memories of her over the years, Wienke said she’s learned a lot about the woman she spent much of her life looking up to.

Stevenson grew up in Antigonish, N.S., and graduated from Acadia University in Wolfville, N.S. She served 23 years with the RCMP, and was 49 when she died.

During her memorial service, friends talked about how dedicated Stevenson was to her husband and two children, and was always involved in their sports or other community activities around Cole Harbour. Despite having a serious job, Stevenson never took herself seriously and lived a life of joy, one friend said.

Stevenson also taught Wienke about the power of taking time for a child, and making them feel seen “in a way that is eternal,” Wienke said, which she tries to do now in her own life.

“I think she impacted so many more people in such beautiful, but often seemingly small ways. And I don’t think I was wrong about admiring her. I think I do even more now,” Wienke said.

Brophy said she’s already seen that lesson in action, since Wienke has made quite an impression on the two young daughters of one of Stevenson’s RCMP colleagues.

“They were in tears saying goodbye to her. And she’s had I think probably a lifelong effect on them just in a few days this week. So it doesn’t end,” Brophy said.

Reflecting on her own experience, Wienke said she hopes her story inspires more people to take a moment to let someone special know how they’ve impacted them — even if it’s a stranger.

Brophy agreed that living life to the fullest and embodying kindness is the best way to honour Stevenson’s memory, and said she feels a part of her daughter lives on in Wienke.

It’s a connection she believes would make Stevenson smile, she said.

“We cannot undo the things that happened. And so my job is to learn, to accept, and keep moving forward and spreading the joy that Heidi was to so many people, and working at living that joy.”

Wienke returned to the Netherlands this week, but said she and Brophy will be staying in touch. She’s already planning on when Brophy can head to Europe for a visit.