How Kahnawake’s cross-border ironworkers are dealing with isolation from their families, community 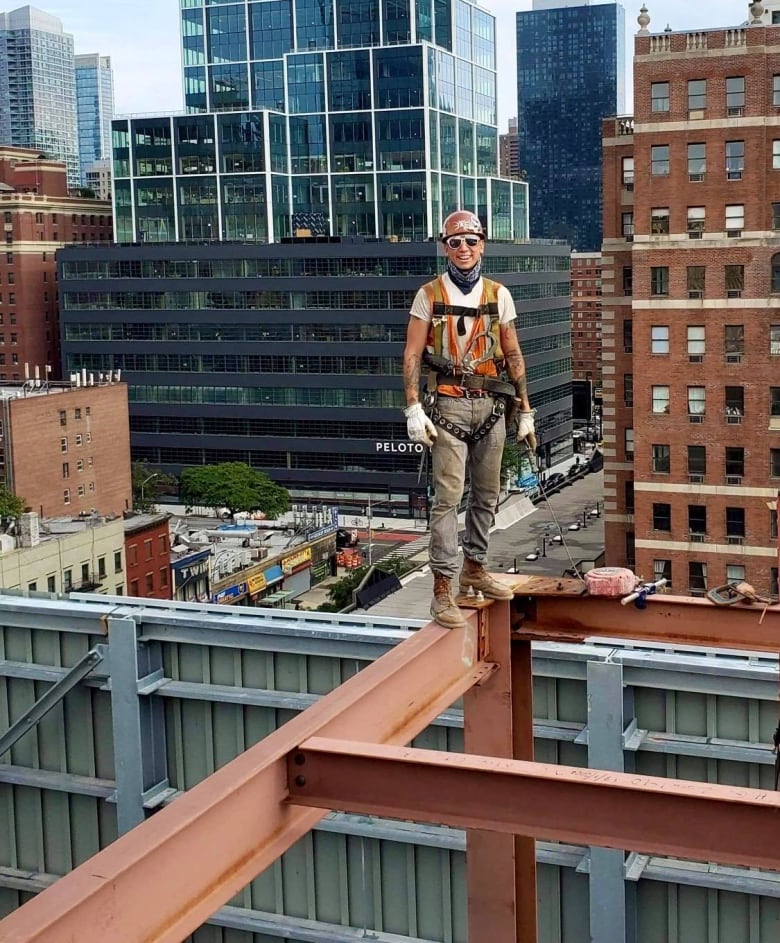 Like many Kanien’kehá:ka (Mohawk) families, Hogan Gilbert’s has a rich history in ironwork, and the trade has taken him far from home.

Gilbert and countless other ironworkers from Kahnawake, Que., near Montreal, travel roughly 600 kilometres up and down the I-87 every week to build New York City’s bridges and skyscrapers. It’s a longstanding tradition that has spanned multiple generations of Kanien’kehá:ka families.

But that part of ironwork life has changed drastically as a result of the coronavirus pandemic. With the closure of the Canada-U.S. border and strict public health measures, many have been isolated from their families, friends, and community.

“You don’t know how much you appreciate home until it’s not accessible anymore.”

Now, after months of visits through windows or camping in yards to keep distance, the first doses of vaccines have arrived — and Kahnawake’s ironworkers see an end to their isolation on the horizon.

‘The solitude was crazy’

In March 2020, before the federal government’s orders under the Quarantine Act, Kahnawake’s COVID-19 task force implemented a number of measures for cross-border workers as a way to minimize risk of transmitting the virus.

It recommended workers stay at their job site until further notice or quarantine for two weeks if they chose to come home.

“The solitude was crazy, to be really honest. I was alone every day for months.”

Mike White, 36, another apprentice ironworker, made the decision to take a leave from work for five months to stay in Kahnawake with his fiancée and four children.

“I only returned to NYC in late August. Fortunately, I got the same job with the same company,” he said in an interview from New York.

“Things were definitely different. We got tested twice a week and a lot of safety measures were put in place.”

But travelling back and forth meant isolating from his family, and being able to speak with them only through a window.

“It was definitely hard on everyone,” he said.

“Things are improving generally both back home and over here in NYC. I take every precaution necessary. I bring my groceries from home, drive to and from work and that’s it.”

Gilbert has had a similar experience. Over the fall and winter, he isolated from his girlfriend when home by camping in their backyard or staying at hotels until it became too expensive to do so.

The extra precautions the couple took were for the safety of elders and the most vulnerable in the community.

“We were extra cautious because I see my parents a lot and they work with the elders, so we distance ourselves from each other in order to protect everyone around us,” said his girlfriend Maylan Jacobs.

“It feels better that he’s being tested regularly and it comes back negative, but there’s always still that chance so it’s kind of like I have to pick between seeing him and seeing my family which is a tough one to make.”

The end of the tunnel

As of Feb. 21, new testing and quarantine requirements are required when entering Canada. Essential workers on infrastructure projects, such as ironworkers, are exempt.

However, the task force in Kahnawake remains cautious, giving ironworkers the OK to return to the community without having to isolate as long as they have had negative COVID-19 PCR test results in the last 72 hours.

White is getting tested every Wednesday before coming home on Friday evenings. His union pays for PCR tests only every two weeks, so he’s paying $120 out of his own pocket for the other weeks.

“We understand, it definitely takes a toll on people,” said Lloyd Phillips, public safety commissioner at the Mohawk Council of Kahnawake and a member of the task force.

“We’re trying to be as fair as we can but also keeping in mind that the whole health of our community is the priority.”

As a part of the task force’s current mass vaccination campaign in Kahnawake, Phillips said a special clinic was organized on March 28 for cross-border workers and students. Both White and Gilbert were among those to receive their first dose of vaccine.

Gilbert said that’s been a huge relief. Although his current schooling schedule means he’ll be home less often, he was able to kiss his girlfriend for the first time since July.

“We looked at each other and we were like, we don’t know if we still know how to do this, and she jumped on me and gave me a big kiss. It was amazing,” he said.

“It feels like there’s a light at the end of the tunnel knowing that I can come home as long as I keep testing negative. That’s key. We can be together, that’s the best part. The second thing is getting vaccinated so that we don’t have to worry about this for much longer.”