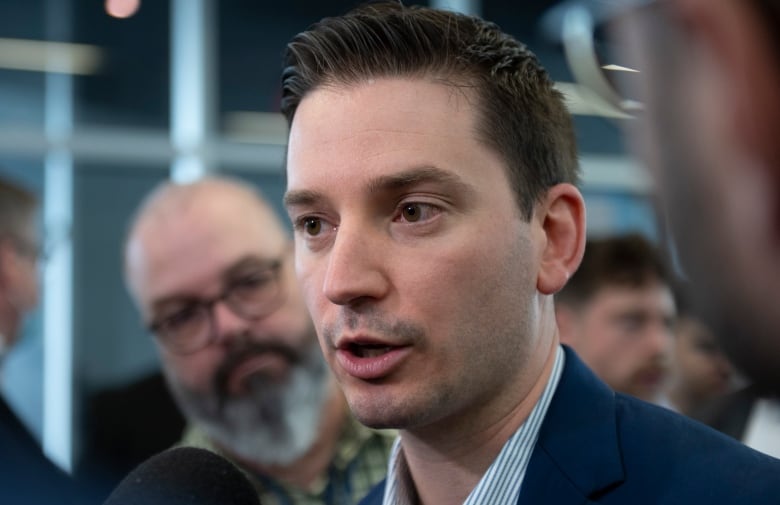 When Saul Polo stood up in Quebec’s National Assembly last week to decry the premier’s comment about the decline of French spoken at home, he struck a nerve.

Polo, the Liberal MNA for Laval-des-Rapides, said François Legault had implied newcomers are a threat to the very survival of the French language in Quebec.

“The moral contract of immigration never included the language spoken at home,” Polo said Thursday, demanding Legault retract his statement about French being under threat because of the proportion of Quebecers speaking it at home.

“When are we going to be Québécois enough for him?”

Simon Jolin-Barrette, the newly minted minister of the French language, replied that the Coalition Avenir Québec (CAQ) government is protecting and promoting French.

The government’s overhaul of the Charter of the French language, Bill 96, received royal assent that day. It comes as Legault is reviving an old and divisive debate about whether the province should have more powers over immigration.

Ahead of the fall provincial election, the premier appears to be positioning himself and his government as defenders of Quebec nationalism, in contrast to more progressive and inclusive approaches.

Critics say the use of the notwithstanding clause to create laws that override basic rights has created a coercive brand of politics that doesn’t square with how Quebecers see the future of their province.

A heavily criticized clause in the law calls on refugees to learn French within six months of arriving in Quebec, after which they can no longer access most public services in any other language.

“All the indicators are red,” said Jolin-Barrette, implying that the situation is close to a crisis.

But recent studies published by the Office québécois de la langue française (OQLF) and Statistics Canada show the use of French in the province has increased in recent years.

While it is becoming more common to speak French in addition to one or more other languages, the number of people in Canada who use French as their primary official language went from 7.7 million in 2011 to 7.9 million in 2016, according to Statistics Canada. The bulk of that increase occurred in Quebec.

Between 1977 — when the language charter, known as Bill 101, passed — and 2015, the percentage of students going to school in French whose first language isn’t French went from 20 per cent to 90 per cent.

For Richard Marcoux, the director of an observatory based at Université Laval studying the demographics of French speakers around the world, people’s first language and the one they speak at home are not effective ways of measuring a language’s vitality.

“It doesn’t have an impact,” Marcoux said. “I have friends who, at home, speak French, English, Spanish, Arabic, Wolof.”

The OQLF defines francophones as people whose first language is French, a measure which could indicate a decline for years to come because of Quebec’s low birth rate and aging population.

Though roughly 77 per cent of Quebecers list French as their first language, 94 per cent speak it well enough to have a conversation, according to the OQLF.

“This idea of the Louisianization, I completely disagree with that. It makes no sense,” he said, referring to Legault saying Quebec could become like the Cajun state in the United States, where only about two per cent are French-speakers, if it didn’t restrict non-French-speaking immigrants.

Marcoux says that back in the 1970s, Bill 101 was justified, given the dominance of English in North America, but that closely monitoring which languages are spoken in Quebec homes today does little to protect French.

Polo, the Liberal MNA, was born in Colombia and moved to Quebec at the age of six in the winter of 1982. He learned French in a class for newcomers and by September was going to school full time in French.

The charter had passed just four years earlier, meaning Polo and all newcomers to the province were to be educated in French until after high school. Polo went to elementary, high school, CEGEP and university in French. At home with his parents, he spoke Spanish, but Polo says he is more fluent in French.

“When my son was born, I decided that it was important for me to transmit (Spanish) to him, to share with him,” said Polo in a recent interview in English.

His son, now 13, is trilingual and goes to school in French. Legault called Polo’s situation an “anecdote,” but the increase in children educated in French and who therefore regularly speak French, suggests otherwise.

The province may still be getting used to the idea of being responsible for the so-called integration of newcomers since Bill 101, says Pierre Anctil, a historian and professor at the University of Ottawa.

“It’s a big change in perspective for francophones to see themselves as the host community for immigrants,” said Anctil, who was recently featured in a documentary about the shift from left to right wing nationalism in Quebec by journalist Francine Pelletier called Bataille pour l’âme du Québec.

Before Bill 101, the anglophone community in the province was the host community, as it shared the rest of Canada’s belief that the country was “empty” and had to be populated to create an economy, Anctil said. The English-speaking community also saw an advantage in boosting its numbers, since it was a minority within a minority.

Both positions are colonialist toward Indigenous people who already lived on the territory — a fact scholar Nathalie Batraville says is often missing from the public conversation.

Batravile, an assistant professor at Concordia University’s Simone de Beauvoir Institute, said the current government is appealing to old fears of “the other.”

The CAQ’s law on secularism, Bill 21, and Bill 96 both include extensive use of the notwithstanding clause, allowing them to override basic freedoms guaranteed by the Canadian Charter of Rights and Freedoms.

“That violation of fundamental rights is always directed toward a group that’s marked as other,” said Batraville, who grew up speaking French with her Haitian parents.

“There is a sentiment of national identity that’s really being fostered around that kind of coercion and exclusion.”

Batraville says legislating such personal aspects of life, like language and the way people dress, is a form of systemic racism the government justifies with the idea of protecting a national identity.

Daniel Béland, the director of the McGill Institute for the Study of Canada, says some of the brand of politics employed by the Legault government may be influenced by trends in France, where anxieties about globalization have translated into strict immigration and secularism laws but have also stifled economic growth.

Mass media and a spike in immigration from France to Quebec in the past decade have created deeper ties between the two nations, Béland said.

“There is this kind of transatlantic connection that’s also an intellectual connection,” he said.

The role of colonialism

To Morgan Kahentonni Phillips, Bill 96 feels familiar. She was part of a group of hundreds of students in the Kanien’kehá:ka community of Kahnawake, who walked out of their high school on Sept. 6, 1978, after their parents declined to apply for a certificate of eligibility for English language instruction.

As a result, they created a high school the community would control and called it Kahnawake Survival School. At the school, students learn Kanien’kéha and study English as a second language.

Cree, Inuit and Kanien’kehá:ka leaders have all called for exemptions from Bill 96, but have been met by near silence from the CAQ government.

“We’re struggling to reclaim and revitalize our own languages,” Phillips said. “This is going to set everybody back.”

Kenneth Deer, who helped create Survival School, says there are all kinds of ways Kahnawake has been working to revitalize Kanien’kéha without forcing people into it, including providing parents the choice between an immersion school and an English school with Kanien’kéha as a subject.

“We account on people’s pride and sense of personal responsibility,” Deer said. “We look at this whole thing as an extension of colonization, where they are imposing a European language on our people.”

Malcolm Reid, who wrote the 1972 book The Shouting Signpainters: A Literary and Political Account of Quebec Revolutionary Nationalism, extensively covered the left wing nationalist movement as a young journalist in the 1960s.

It was after Maurice Duplessis died, putting an end to nearly two decades of his conservative leadership tinged with strict Catholicism. Quebec would soon undergo a massive rejection of the Church’s role in state affairs, now known as the Quiet Revolution.

“The desire for more social justice was growing,” Reid said over the phone. “At that time, it was not in contradiction with the affirmation of Quebec’s identity, Quebec’s special qualities of which heart and soul is the language.”

But things change. Reid — whose children’s book Salut Gadou! was recently adapted into film by a Quebec City artist — can’t tell whether that desire for social justice and independence will once again prevail or not. Instead, he offered a bit of wisdom.

The Quiet Revolution itself, Reid said, was a big surprise.