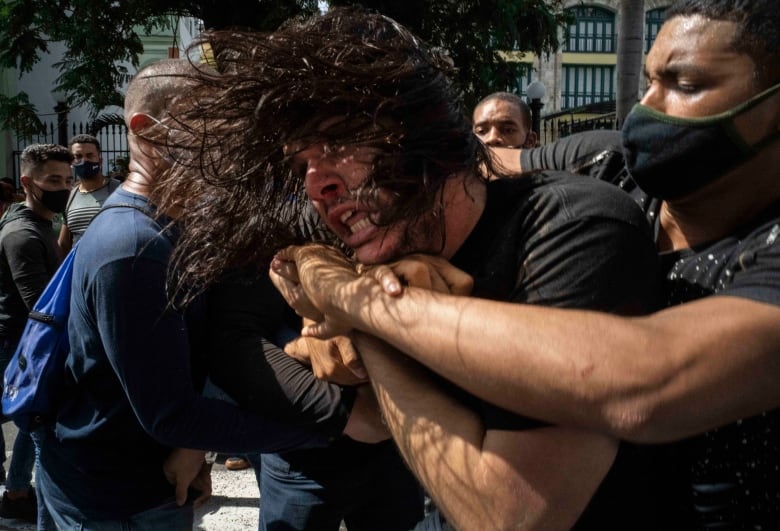 Standing on a street corner in Montreal, Reinaldo Rodriguez has a message for Canadians.

Rodriguez was part of a wave of protests that have swept Canada’s 30,000-strong Cuban community since unrest spread across the island on July 11.

“The people don’t see (the money),” he said. “The same as happens with the money the government makes from its doctors who work overseas. The Cuban hospitals are unsanitary, people don’t have medicines.”

Blanco grew up in Varadero, the heart of the country’s sun-and-sand industry.

“The regime uses that money for repression,” he told CBC News. “We can see how many police cars they have, how well prepared they are to repress. But we don’t have ambulances.” (Cuban authorities have said they lack gasoline for ambulances.)

Cuban-Canadian activists say many Canadians are not aware of the extent to which the survival of Cuba’s one-party regime depends upon the foreign currency tourists bring into the country, or the lengths the Cuban government will go to keep Canadians coming.

And an even smaller number realize just how many of their dollars are going not to Cuba’s undemocratic government, but directly to a group of companies controlled by a small group of well-connected generals in Cuba’s Revolutionary Armed Forces.

While foreign arrivals in Cuba have crashed this year, no other nationality has stayed away as much as Canadians, according to Cuban government statistics.

Overall visits are down about 95 per cent compared to 2019, but Canadian visits have plunged by 99.5 per cent. (Russia, by contrast, actually sent more visitors in 2021.)

That is hugely damaging to Cuba’s economy, because (in normal years) far more Canadians enter and leave Cuba than citizens of any other country — including Cuba itself.

On January 1 this year, Cuba — like many countries — introduced new rules requiring all visitors to produce a negative PCR test for COVID-19 before travel.

Cuba is an island and few of its impoverished citizens can afford to leave it. Foreign visitors are its main source of vulnerability when it comes to COVID.

It wasn’t because Canada’s COVID risk was lower. In fact, the rules were relaxed just as Canada was approaching peak caseload for the entire pandemic up to that point — about 8,000 new cases a day. (It’s just a few hundred per day now.)

The Cuban government also offered PCR tests to Canadians returning home at about one-tenth of the price one would expect to pay in Canada, the U.S. or Mexico.

Some Canadians remained so eager to visit Cuba they sought to extend the Atlantic bubble to include the Caribbean island — by travelling from Halifax to Cayo Coco to stay in a Canadians-only hotel at a time when Nova Scotia was requiring most Canadians looking to visit the province to apply for government permission.

The army and the resorts

The last person to hold the post had been Fidel Castro himself, who left it to become president. The appointment of the long-serving minister of tourism demonstrated the vital importance of hotels and resorts to Cuba’s economy.

Other than tourism, there is little Cuba has to offer world markets in comparison to its needs. For every dollar it gains through exports, it spends five on imports. It looks to tourists to make up that yawning gap year after year.

Raul Castro, more than anyone else, is responsible for Cuba’s modern resort industry. Seen by many Cubans as more pragmatic than his brother Fidel, Raul was in charge of the Revolutionary Armed Forces when Soviet aid to Cuba dried up.

He used the country’s defence budget to branch out into tourism and other businesses, creating the nucleus of a business empire that today is the biggest player in the Cuban economy. Hotels went up around Cuba’s western coast, although Cuba’s own people were forbidden to visit them until 2008 (the same year the Cuban government dropped its ban on cellphones, computers and DVD players.)

A hotel empire led by a general

At the top of the military’s hotel empire sits General Luis Alberto Rodriguez Lopez-Calleja, father of two of Raul Castro’s grandchildren and a member of Cuba’s Politburo — a man some Cubans believe is the one really running the country alongside his father-in-law, using President Miguel Diaz-Canel as a replaceable public face.

Rodriguez Lopez-Calleja heads the armed forces’ holding company GAESA, which runs a range of tourism, construction, banking, air and ground transport and retail businesses across the country, including the hotel chain Gaviota, which owns most of the four- and five-star hotel rooms in the country.

The Cuban state also owns Cuba’s two other big chains, the Gran Caribe Hotel Group and Cubanacan, although both chains recently have been losing ground to the military’s holding company.

The accounts of the chains, like those of all state enterprises in Cuba, are closed.

But the Cuban government has been very public about its intentions to build its economic future on tourism.

Cuba’s current development plan foresees the construction of over 100,000 new hotel rooms by 2030, along with 24 new golf courses.

At the heart of the growth plan are GAESA and other companies owned by the armed forces. GAESA will spend over $15 billion on 121 hotel projects, twice as much as is expected to come from foreign investors and Cuba’s civilian government combined.

The Cuban military is on track to own over 90,000 hotel rooms by 2030 — more rooms than currently exist in the entire Dominican Republic, the most hotel-rich country in the Caribbean.

Even as the pandemic gripped Cuba and tourism plunged, Cuba’s Communist government was able to find Canadian partners. Blue Diamond Resorts, a company that already manages about 20 state-owned hotels in Cuba, went into business with the Cuban state again in August 2020 to open boutique hotel Mystique Casa Perla in Varadero.

Neither Blue Diamond nor its parent company Sunwing responded to CBC News inquiries for this article. Neither did the Cuba Tourist Board of Canada.

Richard Feinberg of the University of California San Diego co-wrote a paper on Cuba’s tourist industry for the Brookings Institution. He said foreign hotel chains typically have one of two types of arrangements with the Cuban state or military.

Hotels owned by the Ministry of Tourism, he said, often have foreign companies as junior partners (typically with a 49 per cent stake in the property, with Cuba holding the controlling share). Military-owned hotels, he said, more often belong entirely to the military’s real estate company Almest S.A., and foreign partners merely have management contracts.

Workers are provided through an employment agency also controlled by GAESA/Gaviota. While a foreign company pays Gaviota an estimated $750 a month for the average base-salary worker, the worker would typically receive less than 10 per cent of that amount in salary. The rest goes to the Cuban military.

Cuban hotel workers take home only a tiny fraction of what their counterparts in Cancun or the Dominican Republic earn for similar work. Guest workers from India working on one hotel were paid ten times more than their Cuban peers.

Communist Party organs defended the pay difference by claiming that the productivity of Indian workers was “three or four times better” than the average Cuban’s.

In addition, GAESA’s construction projects benefit from the forced labour of military conscripts, such as those who dug the foundation beneath the new Hotel Prado y Malecon in Havana.

Felix Blanco points to another difference between Cuba’s tourist industry and other Caribbean destinations: a captive workforce. While Mexican workers unsatisfied with their wages can leave and set up on their own, “my family in Cuba are not allowed to have their own business.” A Cuban who leaves a $40/month job in the tourist sector will be lucky to earn $30/month in other sectors of the economy.

“Cubans leave their jobs as engineers, as medical professionals, as teachers, to work in those hotels,” he told CBC News, “because that’s where the salaries are better, the working conditions are better, and you have access to tips from international tourists.”

No way around the military

Some tourists choose to avoid big hotels and resorts in Cuba, preferring private homes and B&Bs. Even then, it’s hard for them to avoid enriching Cuba’s military. It operates the banks through which tourists make credit card payments to individuals. It operates the stores that sell imported food and goods.

The Cuban military dominates hotel building in Havana and five years ago took over control of Habaguanex, the consortium that operates Old Havana’s stores and restaurants, previously run by the city’s official historian Eusebio Leal.

As U.S. hotel company Marriott discovered last year, it is virtually impossible to operate on the island today without enriching what is already the country’s richest institution: the Revolutionary Armed Forces.

Opinions are divided on whether Canadian tourists might, by staying away, hasten the fall of Cuba’s one-party state. Cuban-Canadians like Felix Blanco say they believe it would help.

Feinberg, meanwhile, said he’s skeptical of “the idea that if we could only reduce the number of stays at these hotels we could somehow starve out and shrink the Cuban security apparatus.”

The Cuban government would ensure that resources flow to that apparatus one way or another, he said.

What’s not clear is where they would flow from. Cuba’s increasing dependence on tourism has been acknowledged by President Miguel Diaz-Canel himself, who has called it “the locomotive of the Cuban economy” and once told national deputies that “what we have on a weekly basis to pay credits, to buy raw materials and to invest, comes from tourism.”

“Cuba is a place that a lot of Canadians have affection for,” said Karen Dubinsky of Queens University, who has written about the lives of ordinary Cubans.

“Canadians aren’t stupid. They know that to be on vacation in a resort hotel is not the same as living life, certainly not the same as how Cubans live life. And maybe Canadians could dig a little deeper,” she told CBC News. “If Canadians become more sympathetic and educated tourists as a result of this, that’s a good place to start.”