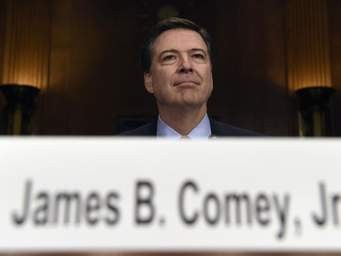 Q: Every time I hold my phone up to my head, I wonder if it’s giving me…

Republicans on the House Judiciary Committee, who first called for a second special counsel’s appointment in July, cited several factors in a letter Tuesday to Attorney General Jeff Sessions and his deputy, Rod Rosenstein.

“In this case, it appears that Director Comey and other senior Justice Department and government officials may have pre-judged the ‘matter’ before all the facts were known, thereby ensuring former Secretary Clinton would not be charged for her criminal activity,” they wrote.

Foremost was the allegation – which emerged in transcripts of FBI staffer interviews conducted by the Office of Special Counsel – that the former FBI boss drafted a statement clearing Clinton in her personal email case weeks before interviewing her and making his public recommendation against criminal charges.

The claim has prompted some lawmakers to call for Comey to return to Capitol Hill to resolve discrepancies in his past statements.

GRAHAM WANTS TO HAUL BACK COMEY TO TESTIFY ON CLINTON EMAIL CASE, SAYS ‘I SMELL A RAT’

The letter specifically cited an exchange that Rep. John Ratcliffe, R-Texas, had at a hearing last year with Comey.

At the time, Ratcliffe asked Comey whether he made the decision not to recommend criminal charges against Clinton before or after she was interviewed by the FBI in early July.

In Tuesday’s letter, Judiciary Committee Chairman Bob Goodlatte, R-Va., and other GOP lawmakers said the latest Comey allegations suggest “the decision had already been made” prior to the interview of Clinton and other key witnesses. The letter also complained that top Clinton associates received immunity for cooperation while also being allowed to attend the FBI’s Clinton interview.

Further, they complained that Comey did not record interviews with Clinton and other close associates, despite Justice Department policy encouraging the practice.

“This is truly inexplicable, given that the case was of keen national interest and importance,” they wrote, adding: “It only reinforces the sense that our nation’s top law enforcement officials conspired to sweep the Clinton ‘matter’ under the rug, and that there is, truly, one system for the powerful and politically well-connected, and another for everyone else.”

The lawmakers want an entirely separate special counsel probe from the one Robert Mueller is leading into Russian meddling in the 2016 election and possible coordination with Trump associates. The crux of their argument is that numerous unanswered questions remain from the 2016 campaign cycle that have been pushed aside amid the intense Russia focus.

The renewed focus on the Clinton email case, though, comes as Trump associates also are facing scrutiny over reports that they used private email to discuss White House issues.

NEW PRESSURE ON COMEY TO RETURN TO CAPITOL HILL, AS WHITE HOUSE ACCUSES HIM OF ‘FALSE TESTIMONY’

During his more recent testimony in June before the Senate Intelligence Committee, Comey said that his decision to announce the results of the Clinton email investigation in July 2016 was influenced by then-Attorney General Loretta Lynch’s infamous meeting days earlier on an Arizona tarmac with former President Bill Clinton.

“Yes, in an ultimately conclusive way, that was the thing that capped it for me – that I had to do something separately to protect the credibility of the investigation,” Comey said.

Comey, whom Trump fired in May amid tensions over the Russia probe, also testified there were “other things” that contributed to his decision to go public, including Lynch allegedly urging him to refer to the email probe as a “matter” and not an “investigation.”