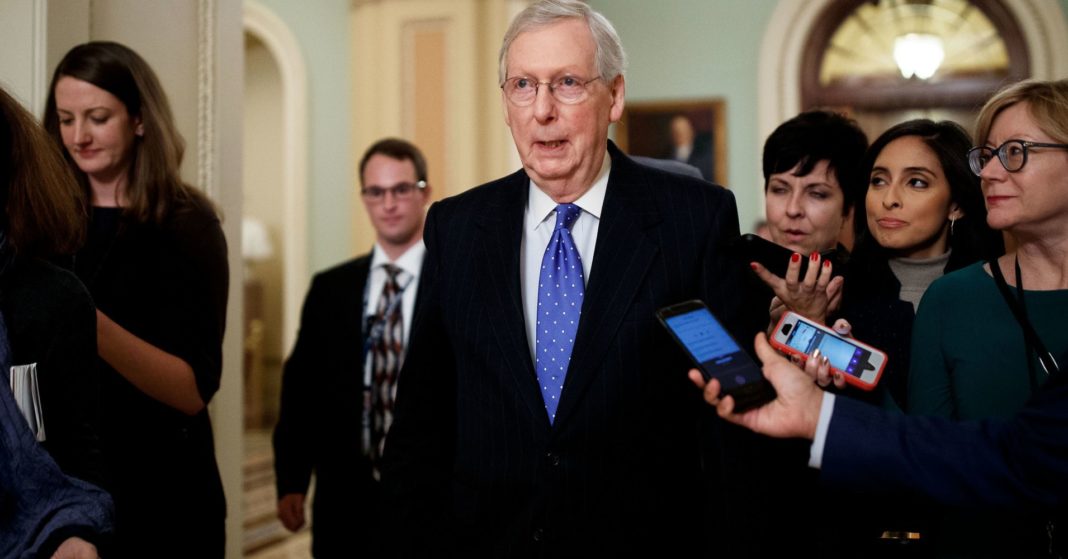 The Senate has passed a bill to avoid a partial government shutdown. But it was unclear Thursday morning whether the House would pass it — or if Trump would sign it — ahead of the midnight Friday deadline to keep the government running.

In a vague tweet Thursday morning sent as House Republicans scrambled to find a way forward, Trump expressed frustration with Congress. He said he was “promised the Wall and Border Security” when he “begrudgingly signed” an omnibus spending bill earlier this year.

“It didn’t happen! We foolishly fight for Border Security for other countries – but not for our beloved U.S.A. Not good!” Trump wrote, while continuing not to divulge whether he would sign the spending measure.

The legislation would fund seven government agencies, including the Department of Homeland Security, at their current levels through Feb. 8. Trump has lamented a lack of money for his proposed border wall, a key campaign promise that tripped up talks in Congress.

The Senate unanimously approved the legislation Wednesday. But a House GOP conference meeting Thursday morning sparked confusion about whether the chamber could pass it amid simmering opposition within the caucus.

House Republicans huddled Thursday morning, and leaders reportedly could not assure members that Trump would sign the bill. The leaders then canceled a news conference after House Speaker Paul Ryan took an emergency call from the president. Republicans claimed they delayed the event due to the meeting running long and votes taking place on the floor.

House Majority Leader Kevin McCarthy told members that they would hold another conference meeting later Thursday to discuss funding, NBC reported. It is unclear when they meeting will take place.

If the House passes the bill and Trump signs it, lawmakers will dodge the third government shutdown this year and delay the ongoing immigration debate until Democrats hold a House majority next year. But Trump — who said last week he would be “proud” to shut down the government over border security — has left the door open to vetoing the bill. The hardline GOP House Freedom Caucus and Trump’s allies in the conservative media have urged him not to sign a bill that does not fund the barrier.

Lawmakers have already funded five departments, including the Pentagon and Health and Human Services. The seven unfunded agencies make up about a quarter of the government.

In separate tweets Thursday morning, the president threatened retribution for Democrats for not funding the wall and appeared to play down the need for the barrier. Democrats “know Steel Slats (Wall) are necessary for Border Security” but “are putting politics over Country,” he contended. He threatened not to “sign any of their legislation, including infrastructure, unless it has perfect Border Security.”

But the president seemed to contradict himself in his next tweet. He suggested he did not need the barrier for strong border security. Trump said U.S. agencies have done a “great job” at the border.

As of Wednesday, the White House had not indicated whether Trump would sign the bill. The president will “take a look” and decide whether to approve it once he sees what Congress passes, a senior administration official told CNBC.

The conservative Freedom Caucus, staunch supporters of the president and his immigration agenda, pushed for the $5 billion in wall money on the House floor Wednesday night. They also called for an end to the so-called catch and release immigration policy. The caucus’s members reportedly plan to oppose the spending bill, which means Republicans would need Democratic support to pass it.

Trump has started to justify his failure to secure wall funding in the spending bill. As a candidate, he repeatedly promised Mexico would pay for the barrier. On Wednesday, he claimed America’s southern neighbor will fund the wall through his revised North American trade agreement, an assertion the White House has struggled to explain.

He also contended that the U.S. military will construct the wall — a process that could also require congressional appropriations.