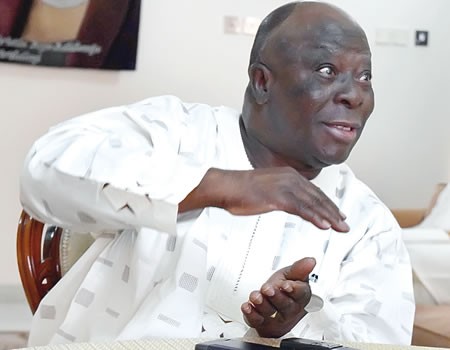 Elder statesman and a chieftain of the pan-Yoruba socio-cultural group, Afenifere, Chief Ayo Adebanjo, says the recent honor done on late MKO Abiola by the Federal government will not in anyway influcnce the South West region to vote for him enmass.

Recall that on June 6th, President Buhari announced that beginning from next year, democracy day will officially be June 12th. On the 12th of June this year, he honored the late MKO Abiola and two others with National awards.

Chief Adebanjo who is an elder statesman in the South West region, said in an interview with Thisday, that the award will not manipulate the people in the region to vote for President Buhari in the 2019 election. Accoridng to him, Yorubas are not dunces.

”Thank you (President) Buhari for doing what is right, although belated. Full stop! Nothing more. If he is going to get any vote it will depend on his performance in the last three years, and not to give emergency recognition just to get votes, that doesn’t work with the people of Nigeria or of Yoruba land, we are no dunces. I appreciate this good thing he did; nothing will deprive me from saying that he has done well by doing this thing, although belated. I don’t want to read any meaning into it. It is a thing I have been agitating for, however belated. Even in his (Buhari’s) own case, he has been there for three years, but he didn’t do it until now. There is no question of drawing a red herring. If we begin to go into why he did it, it will defeat the benefit of the good thing that he has done. Let us acknowledge the good thing he has done and don’t read any other meaning to it. Yorubas are no fools. They can distinguish between good and bad. Nobody can bamboozle us on anything.” he said

On whether President Buhari deserved a second term, Chief Adebanjo said: “I don’t think so. I didn’t think he even deserved the first term and his performance during the term confirms my belief. So, I’m not part of those to be asked if he deserves a second term. I am one of those who warned that it would be a tragedy to vote for him and he has proved me right. Those who voted for him should go and ask him what he has done in the first term, because second term is a question of performance.”