Glasgow art school blaze: Expert warns it may have to be demolished 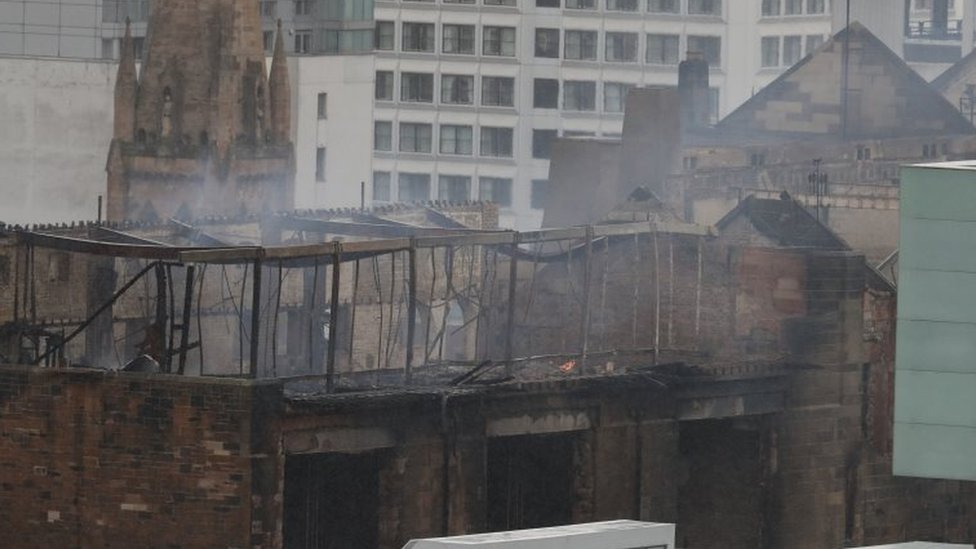 The fire-ravaged structure of the Glasgow School of Art may have to be demolished, a leading construction expert has warned.

Billy Hare, a professor of construction management, said there was a “growing consensus” the globally-significant building may have to be pulled down.

It came as fire crews spent a second day working to extinguish the blaze, which also damaged the 02 ABC venue.

Art school staff have seen the damaged Mackintosh building for the first time.

They were able to see what remains of the historic shell from the college’s adjoining buildings.

Muriel Grey, the chairwoman of the board of the governors, said: “It is an understatement to say everyone is utterly devastated.”

Fire chiefs said the fire had largely been contained and thermal imaging cameras were being used to identify any remaining hotspots.

Prof Hare, deputy director of The Beam Research Centre at Glasgow Caledonian University, warned that the building could be structurally unsound.

He compared the intensity of the blaze with a fire which started in the roof of a building housing Victoria’s nightclub in nearby Sauchiehall Street in March.

Within days of that fire, Glasgow City Council confirmed it would demolish the building.

Prof Hare told BBC Scotland: “At that stage the decision was taken fairly quickly to demolish that building.

“However, the Mack being such a globally-recognised building of significance, this would probably have a bit more deliberation before they come to that decision.

“But the consensus is beginning to grow over the last 24 hours that that might very well be the case.”

A painstaking project such as that could cost in excess of £100m, he warned.

Interactive Before and after: Glasgow School of Art from the air 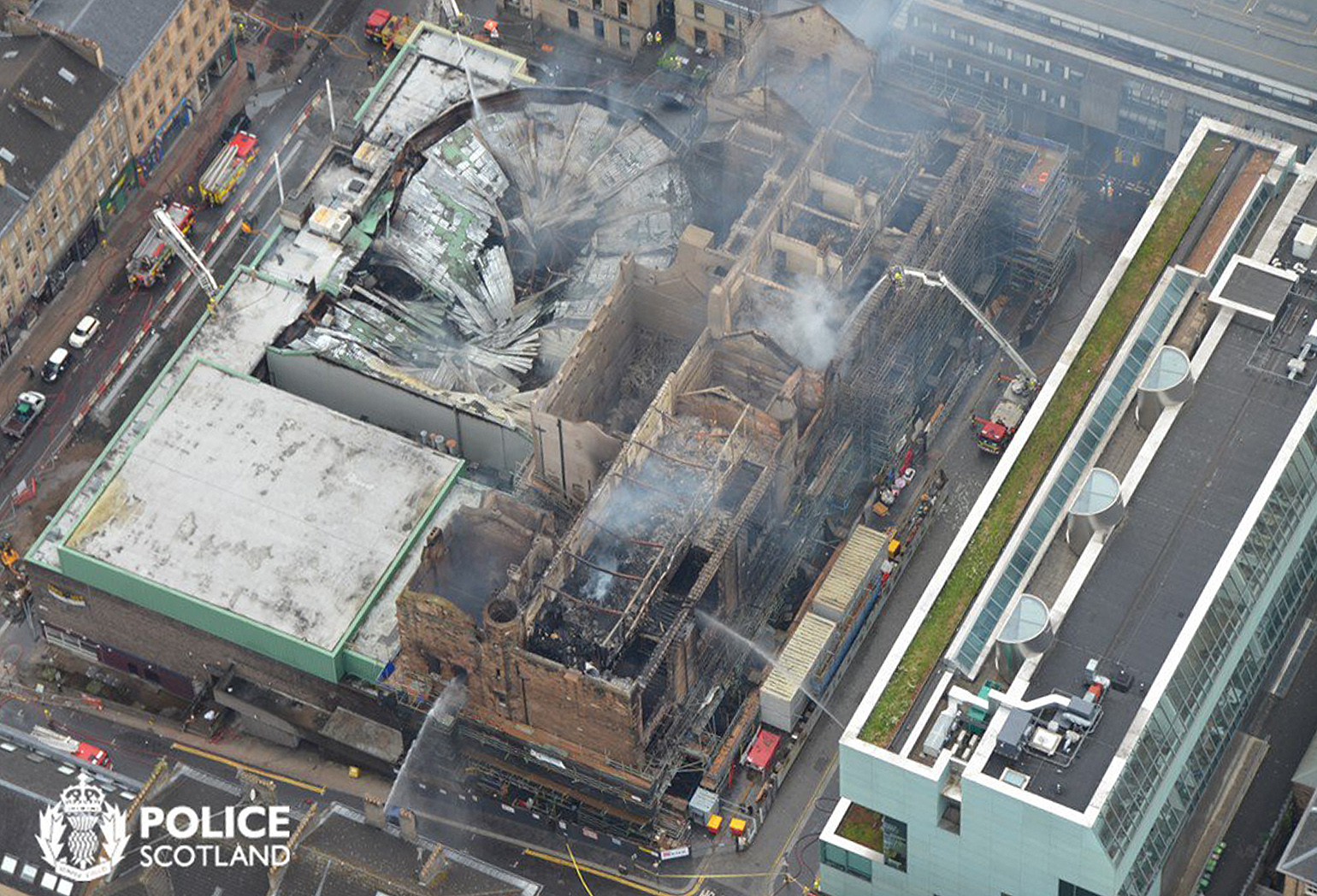 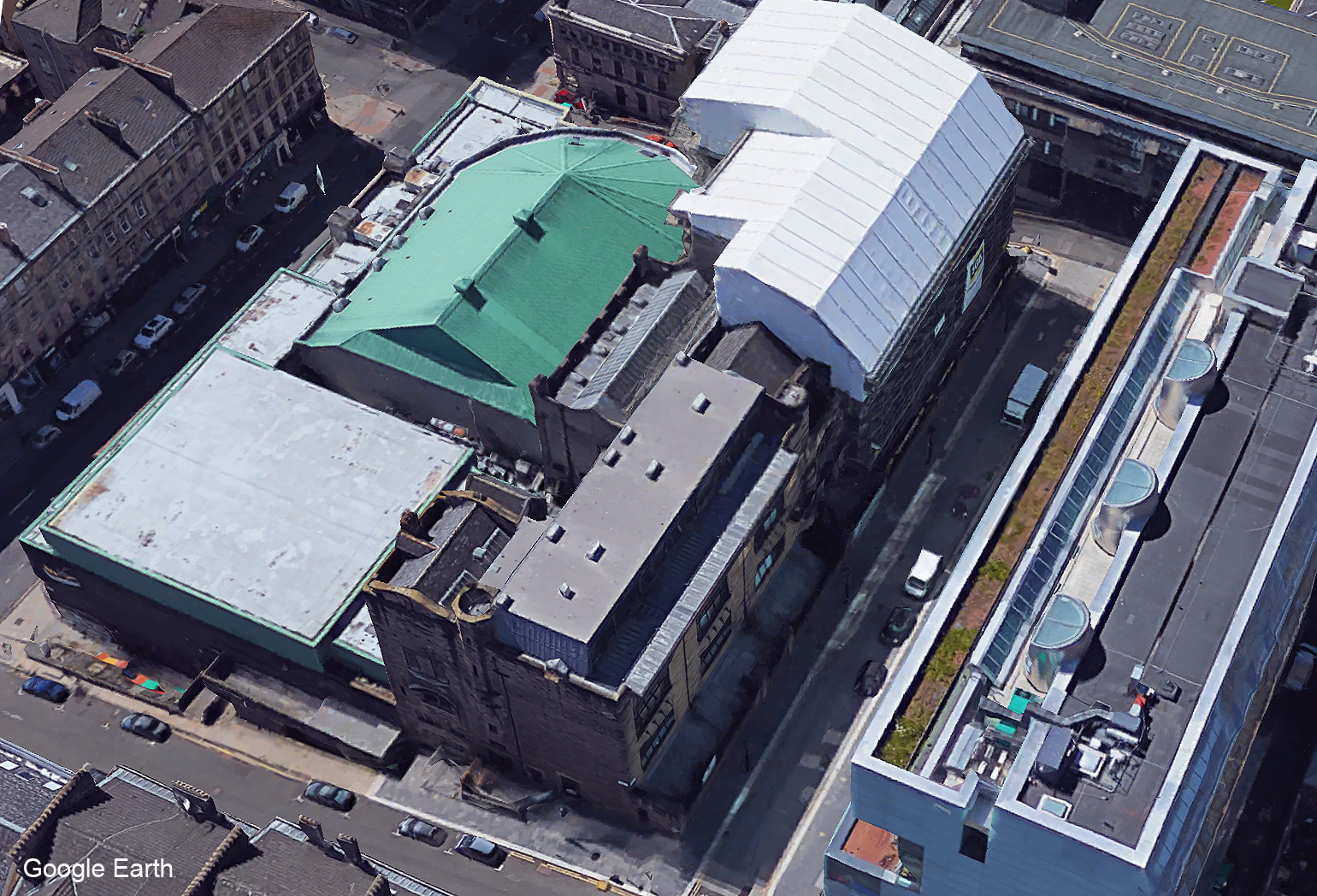 Friday night’s blaze was the second to hit the Charles Rennie Mackintosh-designed building in four years.

It was undergoing an extensive restoration, costing up to £35m, while staff and students worked in neighbouring buildings on the campus.

The Mackintosh building was under the day-to-day control of Kier Construction.

Miles Glendinning, a professor of architectural conservation, told BBC Radio Scotland that the building “should be restored and will be restored”.

He said “remarkable” record-keeping during the restoration process following the 2014 fire meant the art school still exists in digital form.

Speaking to Good Morning Scotland, he said: “A Glasgow School of Art project team [made] a digital recording reconstruction of the whole building, not just the bit that was affected before, down to the nearest millimetre, outside and in, using photos and measured drawings.

“So the building still exists digitally even if the inside is for the moment physically absent.”

He said he would be “very surprised” if the building had to be knocked down and rebuilt, saying the walls could instead be reinforced.

In a statement released by Glasgow School of Art on Sunday evening, Muriel Gray said they had a “difficult waiting game” while investigations were carried out into the condition of the building.

“We remain hopeful of as positive an outcome as possible because it is clear that the love for the Mackintosh and recognition of its importance to Glasgow and the wider world is shared by absolutely everyone,” she added.

The art school’s director Prof Tom Inns said its priority was to continue to operate the school with minimum disruption to staff and students.

Meanwhile, Scottish Secretary David Mundell ruled out a public inquiry into the blaze “unless someone can bring forward some exceptional reason”.

He said various investigations would be held into the cause of the fire – as with any other similar incident.

Scottish Culture Secretary Fiona Hyslop was also asked about the possibility of a public inquiry on BBC’s Sunday Politics Scotland.

She said: “I understand people want a lot of questions answered but clearly we have to have the fire investigation first and we have to give them the time to carry out their very responsible duties to best effect.”

He described part of the 1909 library extension as a “tangled mess of charred timber and distorted steel joists” – but added that some structural joists and outer walls appear to be solid and stable.

He said the eastern wing, which dates from 1899, appears to have been hit worse – with some of the stone “baked”, fractured or “visibly moved” by the heat.

The neighbouring O2 ABC collapsed and glass panels on a building opposite shattered from the high temperature, Mr Sweeney added.

The Glasgow North East MP raised concerns about the role of the contractor, Kier Construction.

“I have to say it’s extremely worrying that within the space of four years, this could happen again,” he said.

“Questions have to be raised about the contractor and how the contractor who had responsibility for the site has managed that site if the security had been sufficient, and so on.”

Kier Construction said it was devastated by the fire and was working closely with the fire service in their investigation.

No-one was injured by the fire, which was reported at about 23:20 on Friday.

At the height of the blaze, a total of 120 firefighters and 20 fire engines were at the scene and nearby homes were evacuated as a precaution. Hoses brought water from the River Clyde to help fight the flames.

A total of 50 firefighters, six fire engines and two high-reach appliances remained at the scene on Sunday.

The fire service said it was too early to speculate on the cause, adding that forensic experts would not be able to gain access to the building until it had been made safe.

Group Manager Martin Hill said: “This has clearly been a protracted incident and today we are still very much in a firefighting phase.

“Our firefighters have been working effectively throughout the night and we are continuing to dampen down any remaining pockets of fire.

“We will remain on the scene for as long as it takes – we are absolutely committed to preventing any further damage to surrounding properties and ensuring the area is made safe.”

Chief officer Alasdair Hay would not be drawn on whether the building would have to be pulled down over safety fears.

He said the fire service was working with structural engineers and Glasgow City Council’s building control department during the operation.

“This is a heartbreaking incident and if we could take any solace from it, there has been no injuries,” he told the BBC News Channel.

“And what we want to absolutely avoid at this stage is for anyone to get injured, so we are being very cautious.”

She said: “The fire has been a devastating blaze, much worse than the one that took hold of the Mackintosh building four years ago.

“The damage is severe and extensive. My heart goes out to everybody associated with the art school.”

Ms Sturgeon said the Scottish government stood “ready to provide any support” in the wake of the blaze.

Prime Minister Theresa May said the UK government would support the Scottish government in restoration efforts.

The A-listed building, considered to be Charles Rennie Mackintosh’s masterpiece, was badly damaged in a blaze in May 2014.

The Mackintosh building was completed in 1909 based on designs by Charles Rennie Mackintosh, Scotland’s most-lauded designer.