Homophobia in French football: Why is it happening? 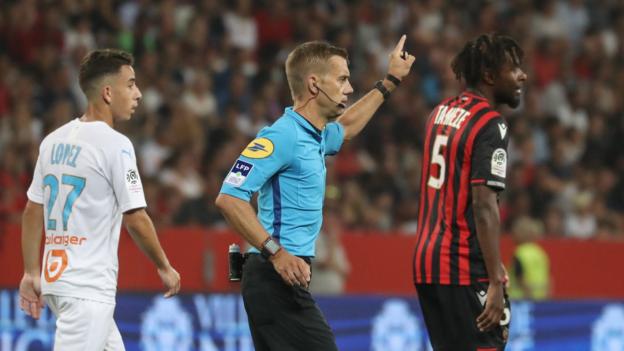 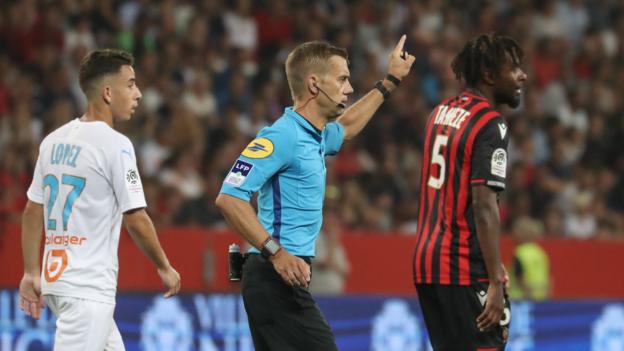 Warning: This article contains language some readers may find offensive.

It was a minute that has changed the face of French football.

Referee Mehdi Mokhtari stopped play in the Ligue 2 game at Nancy on 16 August not for a foul, but for homophobic abuse from the home fans, which rang around the Stade Marcel Picot on the half-hour mark.

The target was not that evening’s opponents, Le Mans, but rather Metz, who are Nancy’s Ligue 1 neighbours in the Lorraine region.

So Mokhtari took action, stopping the game for some 60 seconds.

Her wish has not been granted.

To date, 18 matches are being investigated by the LFP, the French Football League. A number of games have been interrupted, including the Nice-Marseille match on 28 August and the Brest-Reims encounter four days earlier. Some top-flight clubs, including Marseille and Lille, have been given a dressing down for the behaviour of their fans.

Maracineanu is at the heart of the initiative. At a Paris St-Germain v Marseille game last April, she was horrified by insults aimed by PSG fans at their most bitter rivals.

“It’s simply inadmissible to hear the chants I heard,” she said. “I don’t see why we would allow ourselves to do things in a stadium that we wouldn’t do elsewhere.”

Consequently, referees were instructed to halt games this season should such incidents occur. “Everything that is happening now was planned a long time before the minister spoke,” said Bertrand Lambert, president of the anti-homophobia association PanamBoyz & Girlz, but he acknowledged Maracineanu’s words were “an electric shock”.

They certainly got the ball rolling, but French football is fractured over which direction it gets kicked next.

“Why are we being singled out now when we’ve been singing it for 20 years?” said Jean-Michel Goncalves, a leading Nancy supporters’ association figure. “We’ve got nothing against homosexuals. When we insult Metz, it’s more about tradition.” Nathalie Boy de la Tour, the LFP president, did not condone the songs, but struck a chord with fans when she said: “The majority don’t think they’re hurting anyone.”

In a recent poll carried out for RTL, 61% of supporters echoed that view.

France is not alone. In 2016, Cristiano Ronaldo – then at Real Madrid – was told to “come out of the closet” by some Barcelona fans. The new Diego Maradona film shows the Argentina legend teaching his young daughter to say a homophobic term to Napoli’s Serie A rivals in the late 1980s, and Mexico fans achieved notoriety at the 2018 World Cup in Russia for calling opposition goalkeepers male prostitutes when they took goal-kicks.

“To call your opponent homosexual is definitely along a spectrum of machismo, whereby your opponent is weaker – less masculine,” Joshua Nadel, author of Futbol!: Why Soccer Matters in Latin America, told the Guardian.

It may be part of football folklore in Latin language countries, but Maracineanu’s reaction mirrors the sea change in social attitudes that make such chants no longer acceptable inside stadiums when they have long been frowned upon outside them.

However, her clear vision of what is wrong loses focus when it comes to the question of how to put it right.

“It’s not up to me to find solutions,” she said recently, but suggested in L’Equipe earlier this week that a list of homophobic words should be drawn up to give football authorities a clearer picture of what constitutes such abuse.

“I’m not really at ease with this idea of a pre-defined list,” countered Frederic Potier, Inter-ministerial Delegate for the Fight against Racism, anti-Semitism and anti-LGBT. “Forbidding everything overnight would be stupid and would turn against us,” added Yoann Lemaire, president of the Foot Ensemble (Football Together) association.

Opinions are just as varied among those on the pitch.

Nice midfielder Wylan Cyprien said it was “ridiculous” to stop matches “for so little,” claiming the chants were “not aimed at gay people”. His boss, Patrick Vieira, thought referee Clement Turpin had been “totally right” to stop the match with Marseille, a view shared by OM captain Steve Mandanda, who said: “You have to make a stand and then it stops.”

The problem is the LFP’s stand has been weak.

The Piantoni stand at Nancy’s ground was closed for one game, the only significant punishment to date.

Should they go further and dock teams points?

“I don’t think so,” said Lille coach Christophe Galtier. “Why do you want to punish players who are neither racist nor homophobic because there is one, 10, or 100 people who have racist or homophobic reactions in the stands?”

With the onus on referees to stop matches without any clear guidelines, inconsistencies have been numerous and only fuelled fans’ anger and confusion. A meeting of stakeholders called by the LFP to help clarify the situation was due to take place on Thursday, but was pushed back by supporters’ groups, who want to consider the matter internally before widening the discussion.

The general mood, however, is positive.

“We need to soon have applicable rules that are applied everywhere and for everyone,” said Lambert. “But for that, we need to talk to each other, away from the cameras and without politics. I’m optimistic, we’ll get there.”