Herman Cain and Stephen Moore are the beginning of Trump’s ‘politicization’ of the Fed: Barclays 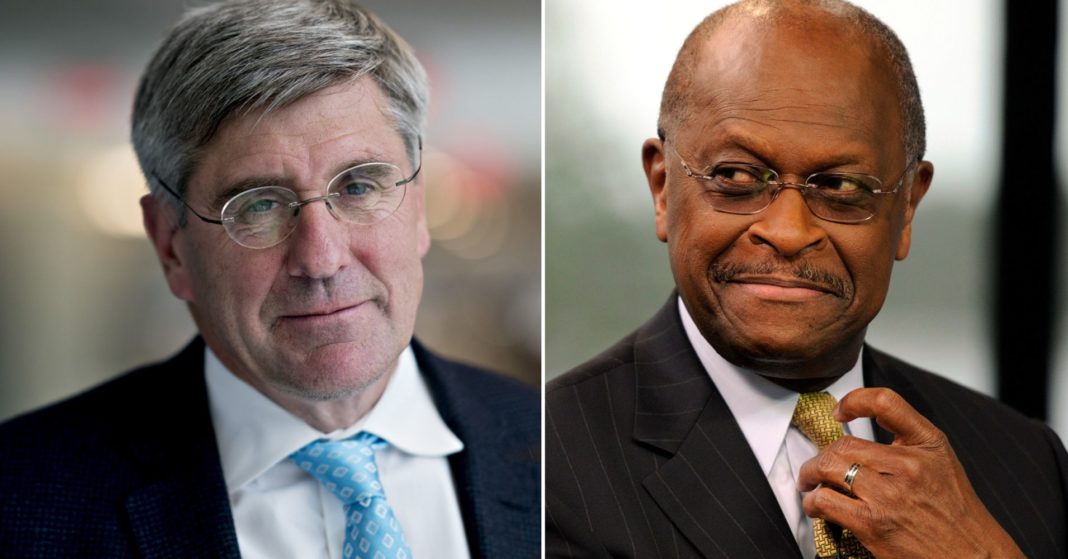 President Donald Trump’s potential nominations of Stephen Moore and Herman Cain to the Federal Reserve could be the beginning of a politicization of the central bank, according to Barclays’ chief U.S. economist.

“When it comes to nominees, most people that get nominated to the board, regardless of what party is in power, they tend to get nominated based on expertise, and they’re largely on the fringe of politics,” said Barclays economist Michael Gapen, adding they are often economists from academia, government or the private sector.

“The two [potential] nominees Cain and Moore seem to be valued more for their political contributions than their economic gravitas,” Gapen said.

He said it is unclear whether either will make it through the nomination process, noting they are far different from Trump’s last four, more traditional, nominees. If they succeeded in gaining approval by the Senate, they would be two of seven board members. The Federal Open Market Committee, which makes policy decisions, consists of the board members and five of the regional bank presidents.

“On the one hand, it’s the beginning of the politicization of the Fed, but I’m not sure it would change the near-term course of policy,” Gapen said.

The economist pointed out that both Moore and Cain seem to have changed their prior hawkish views to fit with the Trump administration’s call for easier Fed policy. Trump has repeatedly criticized the Fed’s interest rate increases and has said the Fed should now cut rates and be more accommodative. The Fed has backed off its forecast for more rate hikes, but officials have not embraced the idea of rate cuts.

“In terms of quantitative tightening, it should absolutely now be quantitative easing,” Trump told reporters on Friday.

Gapen said it’s not unusual for presidents to advocate a certain policy, but what is unusual is for potential nominees to voice policy views in line with the White House ahead of their appointments.

White House top economic advisor Larry Kudlow described Cain and Moore as being capable and said they could serve to counter other views on the Fed board.

“Cain said he fears deflation more than inflation, and Moore has advocated for a 50 [basis point] reduction in the target rate for the federal funds rate,” Gapen said, noting that their “easy money” policies contrast with their previous “hard money” views.

“The market could look toward what they said in the past and what they’re saying now, and argue their policy reaction function could look more political than economic,” said Gapen.

He added that Moore had been an economic advisor to Cain’s presidential campaign and helped create Cain’s tax plan, which called for a return to the gold standard. Cain was a Republican candidate for president in 2012.

“He was a regular critic of the Fed’s unconventional policy easing and, as recently as 2014, advocated for a reversal of QE through $45bn in monthly sales of Treasury securities and MBS holdings that would have reduced the Fed’s securities holdings by 75% through 2020,” Gapen wrote in a note.

“Moore’s criticism of Fed balance sheet policy was driven, in part, by concerns over currency debasement,” Gapen said. “Shifting to a gold standard would eliminate exactly the kind of discretionary policy action both are recommending now.”

Moore has a master of arts in economics from George Mason University. He also served as a fellow at the Cato Institute, the Club for Growth, and the Heritage Foundation and was formerly on The Wall Street Journal editorial board.

The markets have so far shrugged off Trump’s calls for easier Fed policy and his previous four nominees, according to some market pros.

“I think it’s a very big benefit to the U.S. economy and the financial markets that we have a strong and independent Fed, and I hope that continues,” said Ed Keon, chief investment strategist at QMA.

Trump promoted Jerome Powell from governor to chairman. Powell had previous experience as a partner with Carlysle Group and had been with the Treasury.

The president also named Richard Clarida as vice chair. Clarida had served in the U.S. Treasury and is an economist with a Ph.D. who taught at Columbia University.

Michelle Bowman, whom Trump named to the board, was a banking commissioner in Kansas, held positions in FEMA and the Department of Homeland Security, and as an officer of a community bank.

“These four nominations were traditional in nature, and each built a professional career in banking, government, or academia largely out of the political arena,” Gapen wrote. “In our view, their selection was an indication that the administration was willing to put qualified personnel on the Federal Reserve Board and preserve the independence of the institution.”

Gapen expressed concern that if Cain and Moore get board seats, they may clash with the more traditional members. Still, the board has sufficient members to conduct monetary policy based on the Fed’s mandate and not politics.

“Historically, board governors vote in line with the Chair, and the committee strives for consensus outcomes,” Gapen said. “The presence of two political appointees on the board may mean more dissents and discordant communication, but the remainder of the board will have sufficient numbers to conduct monetary policy based on the dual mandate, as opposed to political preference.”