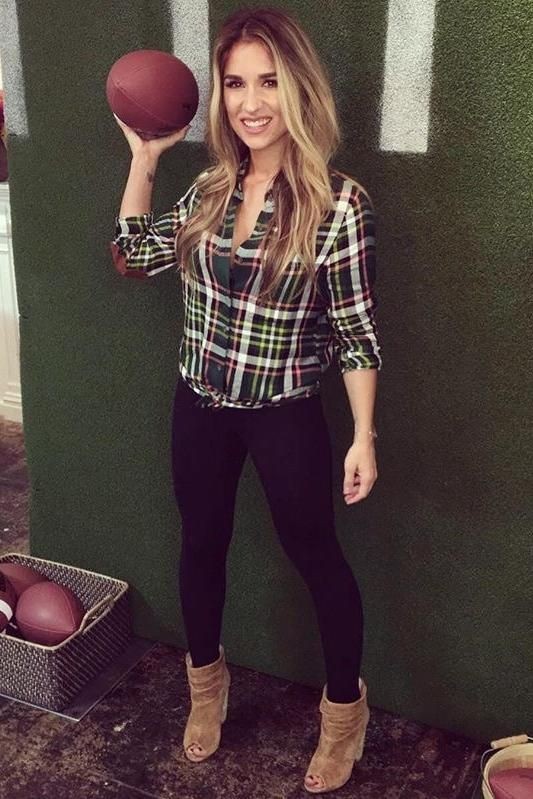 If you’re currently scratching your head, wondering where we came up with this idea, it’s actually not as random as it may seem.

Jessie’s hubby, Eric Decker, just signed with the Tennessee Titans, and thus, their family will be spending all their time in Nashville (where they already own a home).

And guess who recently moved to Music City, too? That’s right, Kristin and her former NFL hubby, Jay Cutler.

But other than residing in the same city and being married to football players, these two have quite a bit in common…

They Have Reality Show Backgrounds: These two could totally relate based solely upon their rise to fame in Hollywood. As you may remember, Jessie and Eric had their own reality series on E! Eric and Jessie: Game On. And, of course, you can’t forget Kristin rose to fame from her start on Laguna Beach and The Hills.

They’re Entrepreneurs: Yes, both boss-ladies run businesses on top of everything else they do. Not only is Kristin an author and fashion designer, she also manages an e-commerce website for jewelry called Uncommon James. Jessie, on the other hand, juggles her singing career with her own e-commerce clothing and accessories line, Kittenish.

Their Children Are the Same Age: Both Jessie and Kristin are mamas first and foremost. Jessie’s daughter, Vivianne, is 3, while her son, Eric, is 1. Kristin’s eldest son, Camden, is 4-years-old, while her second son, Jaxon, is 3. Her daughter, Saylor, is 1…just like Eric! Needless to say, playdates would be a must.

They’re Their Husbands’ Biggest Cheerleaders: Kristin’s husband Jay used to play for the Chicago Bears, while Jessie’s man played for the New Jersey Jets before signing with the Titans. But no matter what jersey they’re wearing, these two ladies are always rooting for their hubbies—on and off the field.

And They’re Always Celebrating Their Men: Jessie and Kristin know how to make their men feel extra special, always going above and beyond when celebrating their accomplishments. Date night is a must…and perhaps a double-date night is in their future?

They’re Unafraid to Overshare About Their Love Lives: These gals are in love, and they’re not afraid to show it! Kristin has shared photos of her man’s booty, while Jessie is constantly sharing steamy details and photos about her romance with Eric.

They Love to Cook: Jessie and Kristin would totally bond in the kitchen as they’re both fans of cooking good food for their family and friends.

They’re Party Planners: Going hand-in-hand with their cooking skills, these two know how to throw a party…Can you imagine what awesomeness would go into a conjoined gathering? Nashville might now be ready!

They Enjoy a Good Sweat Sesh: Not only do Jessie and Kristin love to have some fun, but they work for it, too…especially in the gym. Both ladies continuously post about their gym routines and talk about the importance of getting in a good sweat.

And did we mention their similarly steamy marriages? Just checkin’…Swoon.

Alright, Jessie and Kristin, now it’s up to you to make these BFF dreams of ours come true!