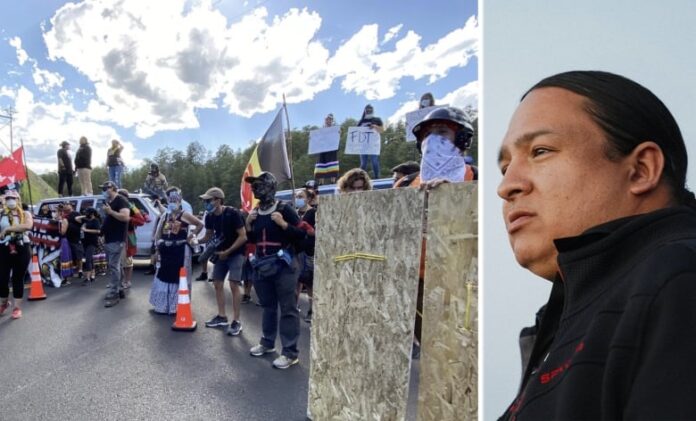 It was a hot, muggy July day when Nick Tilsen and about 200 other Lakotas blocked the way to a sacred mountain. The mountain is part of the He Sapa and is the centre of the Land Back movement in South Dakota.

He Sapa is the name of the territory in Lakota, but most will recognize it as the Black Hills. Within these hills is Mount Rushmore, on the side of which the heads of four U.S. presidents are carved.

“To us, it’s an international symbol of white supremacy because each one of those men on there were responsible for the persecution, the murder, the genocide of Indigenous people and ultimately the stealing of our lands,” said Nick Tilsen in an interview with Unreserved’s Rosanna Deerchild in which she spoke with four leaders within the Indigenous-led Land Back movement — from northern Manitoba to Hawaii to the Black Hills of South Dakota.

The movement, which has gained momentum in recent years, calls for the acknowledgement and return of Indigenous sovereignty over traditional territories.

The land Tilsen wants back in Indigenous hands was promised to the Lakota people in the Treaty of 1868, an agreement between the United States government that recognized the Black Hills as part of the Great Sioux Reservation. Today, it is the longest existing land struggle between the U.S. government and Indigenous people in America.

And so on July 3, 2020, a large crowd of Lakota people gathered at Mount Rushmore to shine a light on the long-standing battle for the Black Hills. Former U.S. President Donald Trump was set to lead a rally there; Tilsen and others blocked entrance to the park.

Tilsen is the CEO of NDN Collective, an organization that supports the self-determination of Indigenous people and uses the motto “defend, develop and decolonize.”

The He Sapa is one of a number of sites on Turtle Island, or North America, where the Land Back movement is gaining momentum. Despite many of these battles being decades in the making, Indigenous communities are displaying new ways of ensuring their rights to the land are not ignored.

WATCH | Inside the Mount Rushmore Protest:

Tilsen and 21 others were arrested that day at Mount Rushmore, to make way for the rally. This past December, all charges were dropped after more than two years dragging through the state and federal court systems.

“The government has tried to turn this into a bureaucracy when it’s actually not that complicated to return the land, and the title to the land, to the people.”

In Hawaii stands another sacred mountain, Mauna Kea. It’s Hawaii’s highest peak, 4,207 metres above sea level, and together with Mauna Loa, the state’s biggest mountain by volume, is seen as the source of all life for native Hawaiians, or Kanaka Maoli.

“We revere these areas not only because they hold the stories of our origin, but also because of their very height,” said Noe Noe Wong-Wilson, who was born and raised on the Hawaiian island of Oahu.

Beginning in the ’60s, Mauna Kea was used for its great height by a group of independent astronomical research facilities. It is now the site of 13 telescopes commissioned by the University of Hawai’i, which had authority over the mountain at that time.

Construction altered the landscape of the summit, pressured the flora and fauna of its delicate ecosystem, and because the mountain is so sacred, amounted to the desecration of a temple. Wong-Wilson said that there is deep regret among kupuna, or elders in the community, for not fighting the development.

“Our Supreme Court, in a landmark decision, made a ruling that the summit area has been so desecrated by the existing 13 telescopes that adding one more would not have any more accumulative effect. And that terrible decision still hangs over our heads,” she said of the October 2018 ruling.

And so when the most recent proposal was made to build the Thirty Meter Telescope — designed to be 30 metres in diameter and about 18 storeys — it was met with a powerful wave of resistance. That resistance gained worldwide attention on July 17, 2019, when 38 elders were arrested for blocking the access road to Mauna Kea.

Expecting a large police presence, approximately 50 kupuna gathered in the dark on the eve of the first day of the protests. It was a cold night and Wong-Wilson recalls sitting among the elders in chairs, many wrapped in sleeping bags, establishing a plan to be resistant but peaceful.

That’s when it was decided to put the eldest protectors on the front line.

“One of our kupuna said, you know this isn’t going to work. If we are all arrested … then this resistance is going to last one day and there’ll be nobody here tomorrow … so we asked all the young people to move to the side of the road,” said Wong-Wilson.

Pua Case was among the kupuna arrested that day. She and Wong-Wilson continued the fight in the courts, and today the mountain is under a new protection. It’s the result of a state bill, signed July 2022, that transitioned the management of Mauna Kea from the University of Hawaii to the newly established Maunakea Stewardship and Oversight Authority, a collective that Case says stands for the protection of Mauna Kea.

“As a collective, we have made a commitment to stop the building, really, of 18 storeys of anything. It didn’t have to be an observatory; it just happens that it is,” said Case.

Case grew up on the slopes of Mauna Kea and says she considers the mountain to be family.

“We really have no choice but to stand to protect that family member, and that’s what we’re doing.”

Much further north, on the traditional territory of Fox Lake Cree Nation, land that was once the source of life for community members lies under water.

It’s water as far as the eye can see, and the skyline is painted with power lines held up by towers that people there call metal trees.

“Unfortunately there’s hundreds and hundreds of miles of metal trees in the area,” said Conway Arthurson, a member of Fox Lake Cree Nation.

“It’s Manitoba’s hub of the north where 80 per cent of the power comes from these dams up here.”

Arthurson is a negotiator for his community, a role he started learning 25 years ago as leaders at that time sought compensation from Manitoba Hydro, the authority responsible for hydro development in Manitoba’s north.

More dams followed and the environmental and social impacts were many. Indigenous leaders of the day fought for acknowledgement from Manitoba Hydro and the federal and provincial governments. In 2004, they gained ground with the signing of an impact settlement agreement with Manitoba Hydro.

“My understanding is the province is still willing to provide up to 26,000 acres for Fox Lake to change into reserve [land]. So that’s the minimum we’re looking at.” 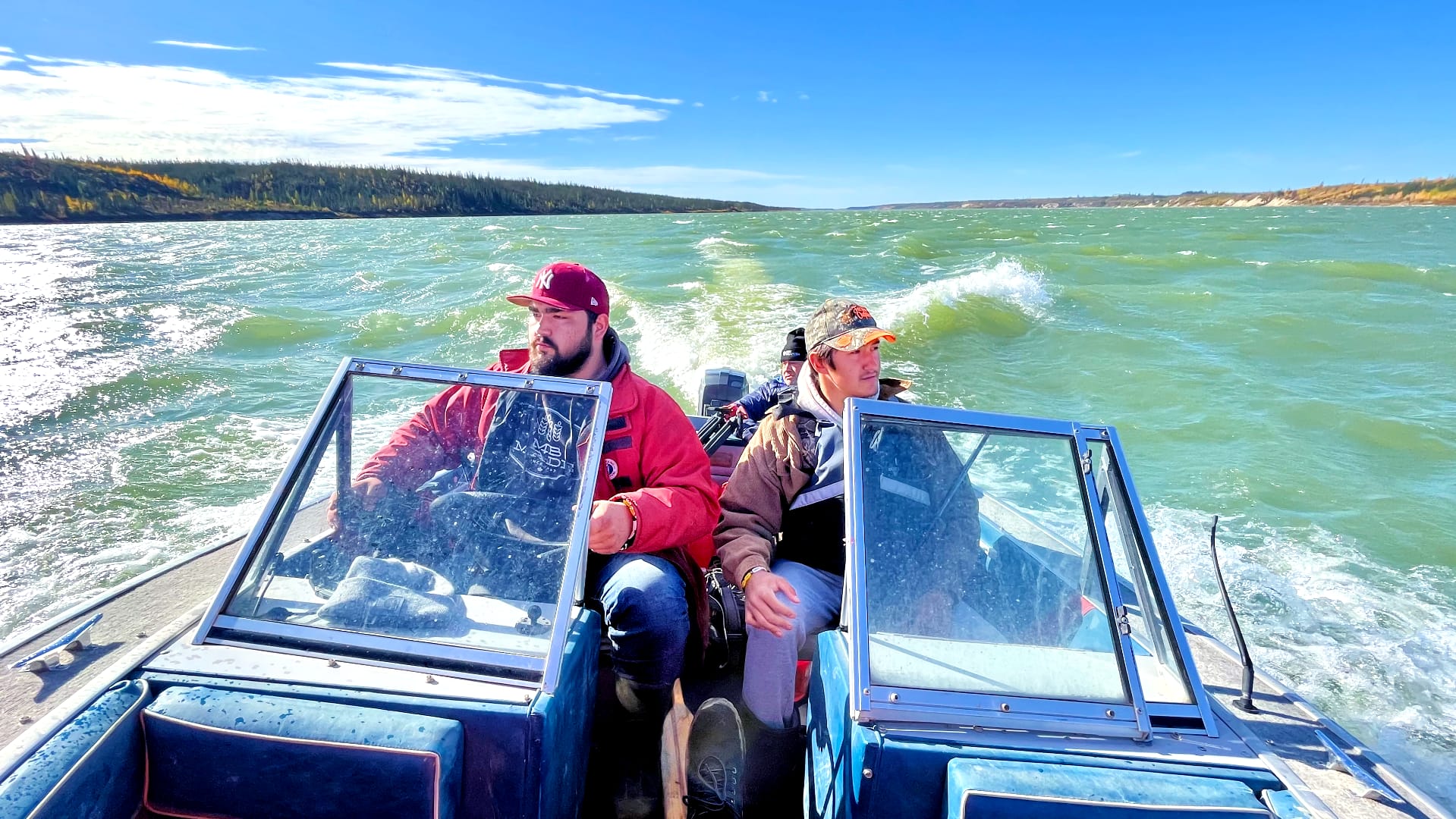 Young hunters from Fox Lake Cree Nation are passing on traditional knowledge of the land despite challenges.

With that step in place, Fox Lake is closer to achieving what it was promised in 1947 when it was recognized as an independent community. It’s a long time coming, said Arthurson, who holds onto the lessons of his ancestors as he works to regain his community’s sovereignty over the land.

“I remember what they’ve told me, and the one most important thing that they said we need to get more of this land. And that’s been basically my life, my career, you know, for the last 25 years is trying to right the wrongs of Fox Lake.”