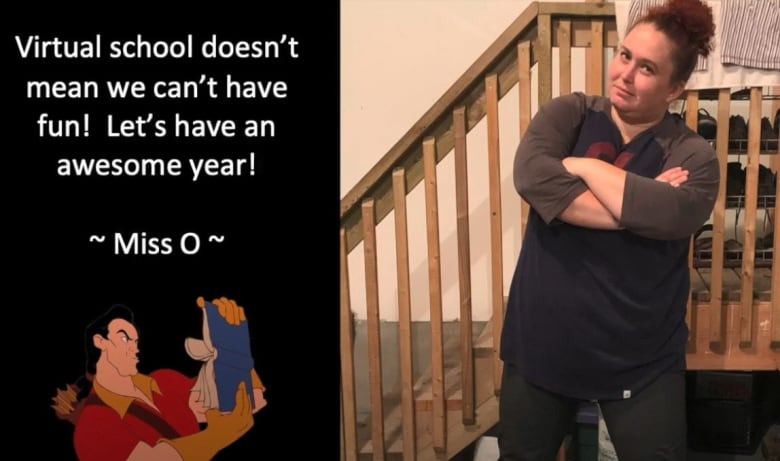 There are no windows in Robyn O’Drowsky’s classroom.

Her walls would usually be plastered with posters and kids’ art. Instead, she’s staring at drab off-white brick, a few lockers and more coat hooks than she has coats.

She’s hunkered down in the girls’ change room at St. Mary’s Catholic School, in Elora, Ont., converted into her Grade 5 virtual classroom. She lives with her parents, who are older and more vulnerable to COVID-19, so she opted to teach online this year.

“It’s strange because I am kind of just in here talking to a computer,” she said. But she’s made it work. “I have my en suite, which is my own private bathroom, and I’m set up in here pretty well.”

The province estimates as of mid-October, some 450,000 students were learning online. O’Drowsky, or Ms. O as students call her, is one of the teachers making it happen. It’s been a steep learning curve, as teaching online is an entirely new concept for most teachers and many of Ontario’s school boards.

For the first few months, O’Drowsky was working and planning lessons pretty much whenever she was awake. She’s now mentoring in-class teachers in case everyone has to pivot.

“If that happens, my kids are already set. We are flying,” she said. “I feel like these children are super resilient.”

The online model has given her a glimpse into student’s lives that she wouldn’t get in a regular classroom. She’s met lots of pets and always knows when someone forgets to change out of their pyjamas. It’s also helped with managing behaviours. She doesn’t have to deal with humming, singing or fidgeting anymore.

“I find we’re getting through lessons a lot faster.”

‘Speaking into the void’

The hardest part has been figuring out how to maintain a one-on-one connection. In a regular classroom, students would just come up to O’Drowsky’s desk.

“It’s a work in progress but as we go, I feel like the kids are getting more confident,” she said.

For Ontario’s schools, it’s been a year of big change and doing things differently. The option of online schooling has been one of the biggest shifts. But the learning curve has been steep for virtual teachers. Haydn Watters caught up with them to see how it’s going. 4:36

That lack of connection has been challenging for Albert Fong, who teaches high school science and physics at The Woodlands School in Mississauga. He’s got a hybrid classroom, with some students in-person and others online.

“This model we have is taking a lot of joy out of teaching because I’m often speaking into the void,” he said. “They’ve muted their microphones and I don’t know if they’re listening.”

He’s been trying to find joy in little things. Like when a student unmutes at the end of class to say bye.

Fong has been teaching for 16 years. This year has been the most difficult. He’s a hands-on teacher, teaching a hands-on subject. He’s tried his best but it’s hard to replicate when students aren’t there in-person.

“I try to not think to June … most teachers in my position are just thinking a couple days ahead.”

Parents now in the classroom too

Typically teachers wouldn’t be sitting down, staring at a screen all day, so they’ve had to get used to that, too.

“It’s exhausting,” admits Alex Mitchell, virtually teaching a Grade 6/7 split for the Catholic school board in Pembroke, Ont. “I have a new found appreciation for desk workers.”

He’s got a big office to himself, so he’s brought a yoga mat and stretches during breaks, off camera of course.

It’s Mitchell’s first year teaching in a public board so he’s getting a far different experience than if he was starting in a physical classroom. He’s finding parents are playing a bigger role than he thought.

“For the first time ever, parents are in the classroom,” he said. “It’s kind of new for me to have to manage adults as well as children.”

Mitchell’s also learned snow days aren’t a thing. While his in-person counterparts got a snow day a few days ago, he had to wake up early to dig himself out.

“That was the very first thing they told us at our very first staff meeting. There will be no snow days. Don’t ask.”

He has been cherishing the “almighty” mute button though, something he hopes to bring when he returns to a physical classroom, post-pandemic.