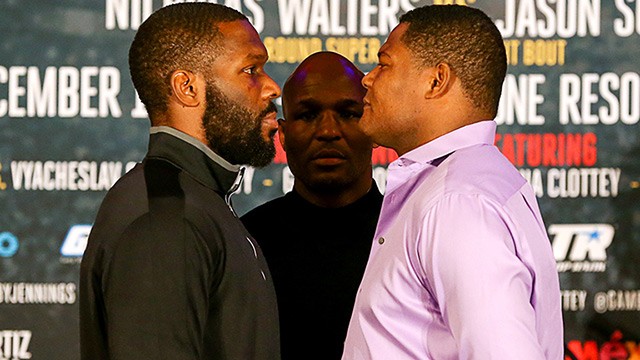 Jennings, 32, of Philadelphia, took it to the overmatched Martz, 26, of Clarksburg, West Virginia, nailing him repeatedly with both hands. In the second round a left to the head dropped him to a knee, then a right hand knocked him to a knee again and moments later he landed a nasty left hand to the side of the head and Martz collapsed to a knee again and referee Paul Parry stropped the fight at 2 minutes, 18 seconds.

“A long time coming,” Jennings said of his return, which followed back-to-back losses in 2015 to Luis Ortiz, by seventh-round knockout, and Wladimir Klitschko, by decision, in a world title fight. “The thing about actually fighting and fighting in the gym and training is it’s really just the atmosphere so for 30 seconds I soaked up the atmosphere and then it was just fighting. This was the type of fight you don’t want to take your time on. It felt good but this is just the beginning.”

Top Rank hopes to have Jennings fight one or two more times this year and then match him with heavyweight titleholder Joseph Parker, who it co-promotes, assuming Parker defeats Hughie Fury in a mandatory defense on Sept. 23. For comparisons, Parker knocked out Martz in one round in 2015.

“I’ll be working my way towards that fight with Parker but right now I’m taking it one step at a time,” Jennings said.

Trainer John David Jackson, who was in his second fight as Jennings’ trainer but worked him throughout the layoff, liked what he saw in the return.

“He has all the talent in the world,” Jackson said. “Two more fights then go for a title. My job is to get him ready for Parker.”

British heavyweight contender Whyte (21-1, 16 KOs), who was coming off a split decision win against Dereck Chisora in a wild 2016 fight of the year contender in December, made his ring return and punished Malcolm Tann (24-6, 13 KOs) en route to a third-round knockout.

Whyte, who is has been calling out world titleholder Deontay Wilder, dropped Tann four times in a brutally one-sided fight. He floored Tann twice in the second round with a clean left to the head and then a right hand to the head for the second knockdown. In between the two Whyte lashed him with hard shots.

On both knockdowns Tann, 38, of Chandler, Arizona, gingerly got to his feet but referee Tom Anderson said “10” both times, yet let the fight continue both times.

In the third round, Whyte, 29, whose only loss came to Anthony Joshua before Joshua won a heavyweight world title, dropped Tann twice more, both with left hands to the body. Finally, Anderson called off the fight after the fourth knockdown at 2 minutes, 36 seconds.

“He counted to 10 twice but I’m glad the referee gave him a chance,” Whyte said. “I’ve been training for eight months with no fights so it was good to get in a few rounds. Some guys stay down but Tann was tough.”

“I’m a natural body puncher and try to hurt these guys to the body,” he said. “Against Deontay Wilder, imagine those shots? With his thin, lean body he’d fall after three or four rounds. I believe in my power. If I land I can knock any of these heavyweights out.”