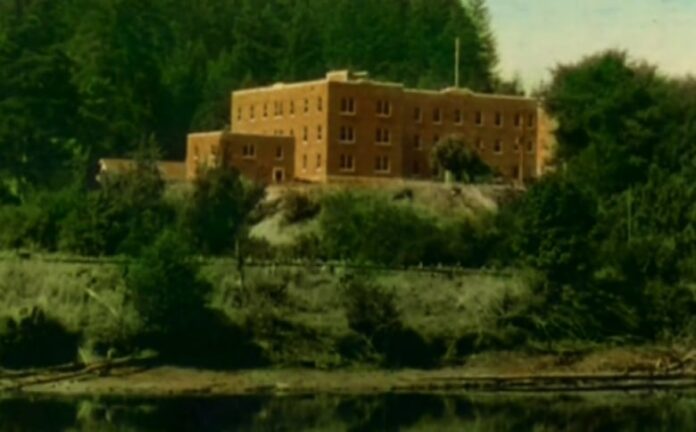 Randy Fred was five years old when his parents were told they’d go to jail if he didn’t go to residential school.

That fall, his parents dropped him off at the Alberni Indian Residential School on Vancouver Island, much to his surprise.

“I was handed off to the supervisor,” he said.

“He brought me into the washroom, had me undress, put me in the shower and then he had one of those fire extinguisher canisters with a pump handle. It was full of bug spray. He sprayed me from head to toe with this bug killer while I was in the shower.

“That was my welcome to the school.”

According to the Tseshaht First Nation, children from more than 100 First Nations across B.C. were forced to attend the school between 1900 and 1973.

The thing he remembers most vividly is loneliness. To escape, he turned to books, mostly about sports.

Fred would eventually become a book publisher, running an imprint for Arsenal Pulp Press. There, in 1988, he shared his story publicly in Celia Haig-Brown’s Resistance and Renewal, one of the first texts to detail the experiences of residential school survivors.

“I couldn’t find anybody to write an introduction … so I took it upon myself.”

“One hundred pages later, here I am bawling my eyes out for the first time in many years, and it actually felt good.”

At the time, no one spoke about sexual abuse. But after that, he said, people started to speak more openly.

“It all comes down to victims like me wanting to break the circle of abuse.”

In 1995, Fred and other survivors from all over B.C. told their stories to the Supreme Court of Canada, hoping to share their stories and have the wrongs done to them made right — or at least as right as could be.

Fred was part of the Blackwater vs. Plint case, in which dormitory supervisor Arthur Henry Plint, who was ultimately convicted and sentenced to 11 years in prison, twice, for the decades of sexual abuse he committed against children at residential school.

But that wasn’t the end of Fred’s legal journey. He and 30 others filed a civil case against the United Church of Canada and the federal government.

He travelled the country trying to raise money for legal fees, and during that time, met with survivors who shared their stories, some of whom spoke of their experiences for the first time.

“There is not a story from any residential school that can today shock me because we listened to stories that were so unbelievable,” he said.

Ultimately, both the church and the government were found liable for the abuse inflicted upon children in their care.

Fred said some people, who only attended residential school for a few months, were awarded more than double what he got.

Most of that, he said, went toward legal bills.

“The big question in my mind is always, was justice served? In my case, I would have to say no.”

He believes that if the case were to go to court today, things might turn out differently.

Documentary in the works

Now, two decades after the course case wrapped up, Fred is on a mission to preserve that part of history.

A filmmaker and writer, he plans to make a documentary about the case and the people involved.

As long as he can secure the funding, he hopes to begin shooting the film next summer and share it with the world in 2024.

“I’ve taken great interest in using stories as a method for healing,” he said.

“Every time I tell my personal story, I feel better.”

Mental health counselling and crisis support are also available 24 hours a day, seven days a week through the Hope for Wellness hotline at 1-855-242-3310 or by online chat at www.hopeforwellness.ca.