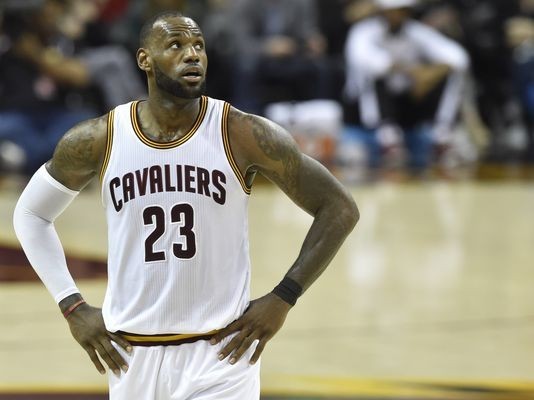 The question arose because as James’ Cleveland Cavaliers were preparing to play the Golden State Warriors in Oakland, someone attacked his house in Los Angeles.

“According to the Los Angeles Police Department, LeBron James’ home in L.A. was the target of racist graffiti,” NPR’s Tom Goldman reports. “An LAPD spokesman says a vandalism call came in early Wednesday morning, reporting the n-word had been spray-painted on James’ private gate.”

After being asked about the graffiti, James stated, “No matter how much money you have, no matter how famous you are, no matter how many people admire you, you know being black in America is tough. And we got a long way to go, for us as a society and for us as African Americans, until we feel equal in America.”

The house isn’t James’ main residence, and he might have been forgiven for refusing to let vandalism distract him from competing for an NBA title. But when he was asked about the crime, the Cavaliers star didn’t duck the question.

“Hate in America, especially for African Americans, is living every day,” James said, “and even though it’s concealed most of the time, even though people hide their faces and … when they see you will smile in your face, it’s alive every day.”

Referring to an infamous hate crime, James spoke about the decision by Emmett Till’s mother to hold an open-casket funeral so there would be witnesses to the racist brutality her son suffered.

The most unfortunate aspect of his situation, James said later, was that he couldn’t be with his children to talk about it with them.

His wife and mother would speak to the children about the incident after school, and he planned to connect via FaceTime.

While saying his two sons, ages 9 and 12, love life and have open minds, James added, “at the end of the day, they’re going to have to walk their own path. And hopefully I give them enough life skills throughout their journey where, when they’re ready to fly, they can fly on their own.”

After noting that the vandalism had intruded on “one of the greatest sporting events that we have,” James said that if the incident keeps the conversation about racism alive, James said, “then I’m OK with it.”

“My family is safe,” he said. “At the end of the day they’re safe, and that’s the most important.”

By Wednesday afternoon, the gate at James’ house had been freshly repainted.