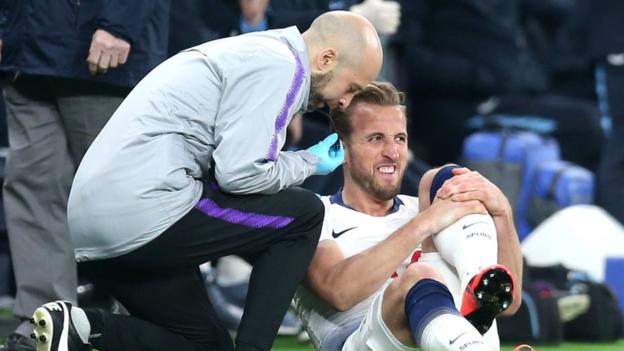 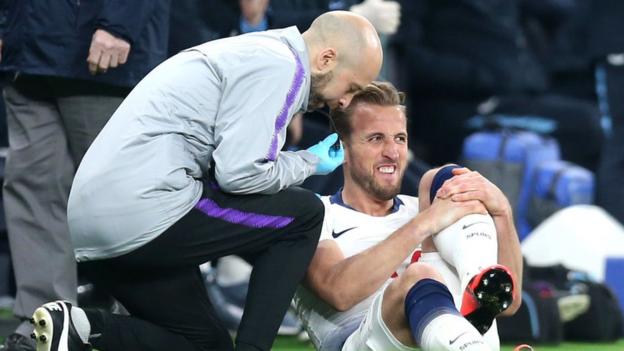 Tottenham striker Harry Kane could miss the rest of the season with an ankle injury, says manager Mauricio Pochettino.

Kane, 25, will have an MRI scan on Wednesday after hobbling off during Tuesday’s 1-0 win over Manchester City in the first leg of their Champions League quarter-final.

The England captain was seen leaving the stadium on crutches, with a protective boot on his left ankle.

“It’s a worry for us,” said Pochettino.

“We are going to miss him – maybe for the rest of the season. We hope it is not a big issue but there is not to much time to recover. He twisted his ankle so we will see how it reacts in a few hours.”

Kane had slipped as he tried to block Fabian Delph’s clearance on the right touchline in the second half and was substituted immediately.

He was ruled out for almost two months in January when he damaged ligaments in the same ankle during their 1-0 Premier League home defeat by Manchester United.

In addition, he missed a month of last season with a similar injury to the right ankle, and endured separate absences of six and four weeks during the 2016-17 campaign.

“We need to check but it looks like it is the same ankle and similar injury,” said Pochettino. “It is very sad and very disappointing.”

Former Tottenham midfielder Jermaine Jenas said on BT Sport he would “be surprised if Kane plays again this season”.

Ex-Chelsea striker Chris Sutton described Kane as Spurs’ “king” and said it is a “massive blow” for the side, who are chasing a top-four finish in the Premier League with six games to go.

“It’s the way he lands on his left foot. He makes the challenge and then his ankle rocks, which would suggest ligament damage,” Sutton told BBC Radio 5 Live.

Kane, the top scorer at last summer’s World Cup, could also be a doubt for England’s Nations League semi-final against the Netherlands on 6 June.