Hamilton on pole for Azerbaijan GP 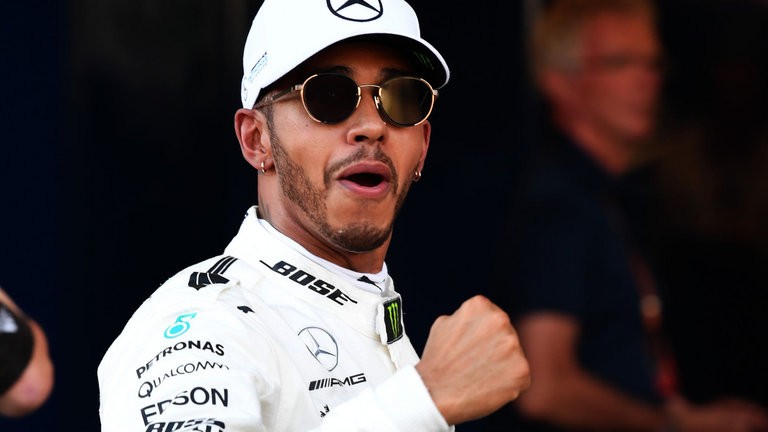 The three-time world champion starts ahead of Bottas with Ferrari duo Kimi Raikkonen and Sebastian Vettel, the championship leader, occupying the second row of the grid.

His quickest lap of 1min 40.593sec came in the final seconds of the session following a red-flagged stoppage which turned the finale into a 3min 30sec showdown.

The 32-year-old bounced back from a frustrating practice outing on Friday to clinch his fifth pole in eight races this season as Mercedes locked out the front row.

Hamilton, who was quickest around the Baku street circuit by half a second, could match Schumacher’s mark at next month’s British Grand Prix if he can also take pole in Austria in a fortnight.

“That was one of the most exciting laps I have had all year,” said an ecstatic Hamilton. “A lot of pressure as we’ve been struggling with getting temperature into the tyres – I was just praying it was enough.

“I am so pumped – that’s how qualifying should be. It is going to be a long hard race, but it’s the best place to start.”

Bottas, who had been fastest in Q3 until Hamilton’s stunning final lap, admitted he was disappointed.

“The lap, in the end, wasn’t quite perfect, I was struggling the front left temperature and Lewis then did his lap! It’s disappointing, but second place is not bad.”

Hamilton is 12 points behind Vettel in the championship after seven races.

Max Verstappen was fifth for Red Bull ahead of the two Force Indias of Sergio Perez and Esteban Ocon, Canadian teenager Lance Stroll who was eighth ahead of his Williams teammate Felipe Massa and Australian Daniel Ricciardo, who crashed his Red Bull to engage the red flag and create the final drama.

The session began in steamy heat in the late afternoon with shadows stretching to ensure cooler patches on a track that was measured at 50 degrees Celsius as the action started. The air temperature was 28 degrees.

Jolyon Palmer was unable to take part after his Renault caught fire due to a fuel leak during the morning final practice, but approached the stewards for permission to take part in Sunday’s race.

He is likely to start from the back of the grid, or the pit lane, where he will be accompanied by the two McLarens of Fernando Alonso and Stoffel Vandoorne, the pair having accumulated 75 penalty points for replacement parts for their Honda engines.

The luckless Alonso failed to make the cut to Q2 for the first time this season, and he was eliminated along with Romain Grosjean of Haas, Marcus Ericsson of Sauber and Vandoorne.

Ericsson’s teammate Pascal Wehrlein squeezed through to Q2, outpacing Alonso by 0.017 seconds, a bold effort by the Sauber man.

The two Mercedes men were soon quickest again in Q2, clear confirmation that Hamilton and Mercedes had found an overnight transformation in their car.

Bottas topped the first runs in Q3 ahead of Hamilton, who made an error in the final sector, with Verstappen third, but the Briton saved his best for last to deny the Finn.