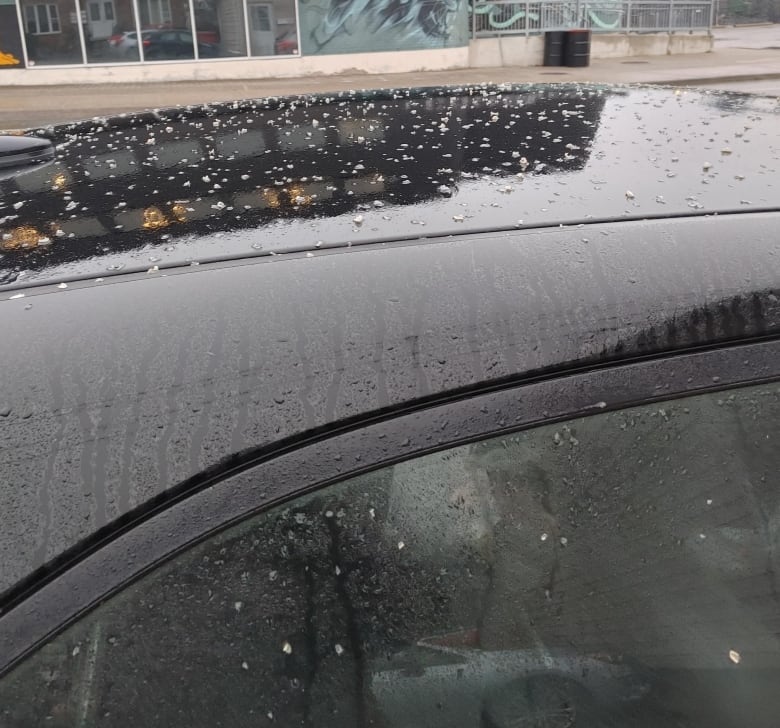 Adrienne Van Halem woke up one recent morning to find it had rained soybeans overnight.

The 35-year-old left her home on Burlington Street East in Hamilton on Dec. 29 to walk her dog and found something off-white sprinkled over cars, houses, porches — everything in her North End neighbourhood.

It wasn’t snowfall or the salt that Van Halem mistook it for at first. It was bean husks.

“It struck me as unusual, of course,” she said with a laugh. “It’s just gross and messy and surprising to have beans raining down.”

“My whole block is covered in the soybean skins,” she wrote, sharing a picture of the top of a car dotted with shells.

The homeowner also called nearby Bunge, a U.S.-based food company that operates an oilseed processing plant in Hamilton, to ask if it had any explanation for what happened.

She said she received a voicemail confirming the facility was involved, and the next day a letter arrived acknowledging what happened, along with a gift card for a car wash.

Sometime overnight between Dec. 28 and 29, pieces of soybeans were “discharged inadvertently,” Bunge spokesperson Deb Seidel wrote in an email to CBC News, calling it a rare occurrence.

“While the hulls discharge posed no health or safety risk to either neighbours or employees, we understand that the residue was an annoyance for our neighbours,” she said.

Seidel confirmed that gift certificates were handed out to those who were affected and said the company contacted Ontario’s Ministry of the Environment and is “working on identifying and implementing corrective action from the incident.”

The ministry confirmed in an email to CBC News that it followed up with Bunge and determined that the spray of shells that landed on the area was the result of a plugged dust collector caused by excess moisture in the process.

“The facility was unaware until the City of Hamilton relayed a public complaint,” the email read.

‘A whole lot of soyabeans’

As executive director of Environment Hamilton, Lukasik said she’s familiar with a variety of different fallouts from industry in the city, particularly steel mills and scrapyards, which can cause dust and iron oxide to rain on houses nearby.

But she had never heard of an area being coated in bean bits before.

“If a whole lot of soyabeans blew out of the facility and landed on the surrounding neighbourhood … and they weren’t aware, that really concerns me,” she said.

Seidel said Bunge was aware of the release, but its staff were focused on fixing the operational issue and “did not recognize the full extent of the drift until the next afternoon.” Soybean residue could still be found in the area when CBC News visited a week later.

The company has had a location in Hamilton for about 80 years.

Its stack towers over a section of the city near one end of Burlington Street, where oil is extracted from the beans and used in food products such as margarine or salad oil. The remnants are turned into a soybean meal that’s used as animal feed.

While dust and other forms of release-related residue are historically associated with heavy industry, Lukasik said Hamilton’s growing agri-industrial centre means incidents like this could become more common.

Provincial rules dictate that no industry is supposed to be doing anything that leads to an impact offsite, she added, including soybean skins falling from the sky.

The ministry noted that similar incidents have been reported in the past, such as a release of sugar from a company in the neighbourhood in 2020.

That case actually came up when Van Halem was researching the area before she and her husband bought their home about two years ago.

In response to her post on Reddit, some people said that’s what you get for living so close to a plant.

But Van Halem said she and her husband enjoy the industrial nature of the neighbourhood and knew full well what they were getting into when they bought their home. She also said she recognizes that bean hulls falling on your house isn’t the biggest deal.

Still, she wishes the company had reached out first to explain what happened, rather than her having to make the first move.

“I think there’s a responsibility that lies in the industrial area that operates in a downtown core to be good neighbours.”