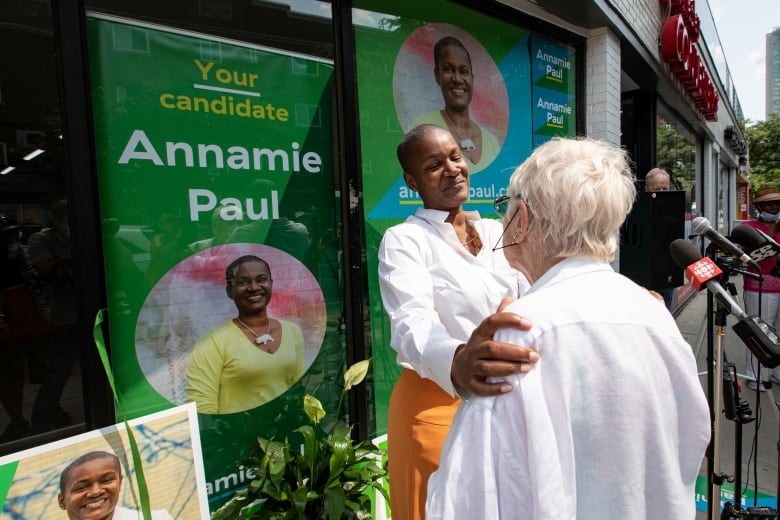 Two years after vacating her post as federal Green Party leader, incumbent British Columbia MP Elizabeth May says she’s “confident” in the party and its candidates, despite “bumps in the road.”

“It’s way too early for people to be writing us off,” said May. “Most of what I’ve read about what’s going on in the party I know isn’t true.”

In July, just weeks before the federal election began, Green executives launched a legal challenge against Paul over an arbitration order that quashed a non-confidence vote and membership review of her leadership. Paul later confirmed the non-confidence vote had been cancelled, and that no similar motion would be proposed by the Green’s current executive council.

Though she assured supporters that she would not “be distracted any further from the work that has to be done,” the leader and her candidates have struggled to gain traction following the power struggle. As of this writing, the party is polling behind the Liberals, Conservatives, NDP and Bloc Quebecois, with just 3.1 per cent support nationally. This after the Greens won a historic three seats in 2019.

Asked why she hasn’t campaigned in more ridings, Paul acknowledged Friday that some candidates may want her to steer clear. A CBC analysis of her itineraries shows she has campaigned outside her home riding of Toronto Centre only once — and it was in a neighbouring riding.

While May believes the party is well-positioned to extend its success on Vancouver Island to ridings in Ontario and New Brunswick, interviews with local B.C. voters reveal a conflicted constituency — one concerned about a wide array of issues, including but not limited to the climate emergency.

A key battleground for the party appears to be the Vancouver Island riding of Nanaimo—Ladysmith, which at least one expert suggests is at risk of flipping.

“The Conservatives and NDP are really, really putting a lot of energy and money into that riding,” said University of Victoria public administration teaching professor Kimberly Speers. “They want that Green seat.”

In 2019, incumbent Paul Manly became the second MP elected under the Green banner, securing 37.3 per cent of the vote in Nanaimo—Ladysmith. But NDP challenger Lisa Marie Barron says her community is being under-serviced in Ottawa, and blames the Greens’ lack of official party status.

“Paul Manly can send out as many petitions as he wants,” Barron said. “He can work hard, but he doesn’t have that voice in Parliament to be able to move things forward.”

Barron says a vote for the NDP is a vote for a different approach to the climate emergency.

“A key differentiation between the NDP and the Green Party is that the NDP understand that in order to address the climate crisis, we need to be addressing social justice,” she said. “We can’t disconnect the two.”

Climate change not only issue for Vancouver Island voters

In August, the UN’s panel on climate change warned the world is dangerously close to runaway global warming, saying humans are “unequivocally” to blame.

For many, the report served as a dire confirmation following a summer of extreme weather events, including an unprecedented heat dome that killed hundreds of British Columbians and turned much of the province’s forests into kindling for wildfires.

But students at Vancouver Island University, in Nanaimo, B.C., tell CBC their priorities are the economy and affordability.

“I’ve heard so many students talk about how they can’t find find a place at all, let alone a place that’s affordable for them to live,” said second-year nursing student Rebecca Scrivens.

“What is life going to look like post-grad as far as employment and housing [is concerned]?” asked second-year chemistry student Morgan Gaudet. “That’s my biggest issue right now… I want to be able to do things that my parents and grandparents did, like buying houses and raising kids and being financially stable enough to do that in our economy.”

In its 103-page platform, which was released days before the first national televised leaders’ debate, the Green Party says it will “declare housing affordability and homelessness a national emergency,” “create a comprehensive and equitable Guaranteed Livable Income for every person in Canada” and “raise the ’empty home’ tax for foreign and corporate residential property owners who leave buildings and units vacant,” though it does not indicate by how much.

Some voters in Victoria, however, say there’s little chance those promises will be achieved.

“[The Greens are] never going to form the government,” said Judy Walker. “I support Elizabeth May, for sure, but she’s not in my riding, so I can’t vote for her.”

“I would totally be … campaigning for the Green Party if I thought they actually had a chance,” said Kellie Camphaug. “But from what I’ve seen from the past, it’s going to be either NDP, Liberal or Conservative [in Victoria].”

“I’m afraid of a Conservative-Bloc alliance,” said long-time NDP supporter Pat Dirks. “Whatever of the major parties gets into power, I want there to be a party on the left that can call them to order.”

University of Victoria teaching professor Kim Speers predicts Elizabeth May will recapture her seat, but whether she returns to Ottawa alone remains to be seen.

In the Ontario riding of Kitchener—Centre, incumbent Liberal Raj Saini’s last-minute decision to end his campaign amid allegations of sexual harassment has opened up space for Green candidate Mike Morrice. The Green Party finished second in the riding, behind the Liberals, in 2019.

Then again, Atwin crossed the floor to join the Liberals in June — and is now running against O’Byrne.