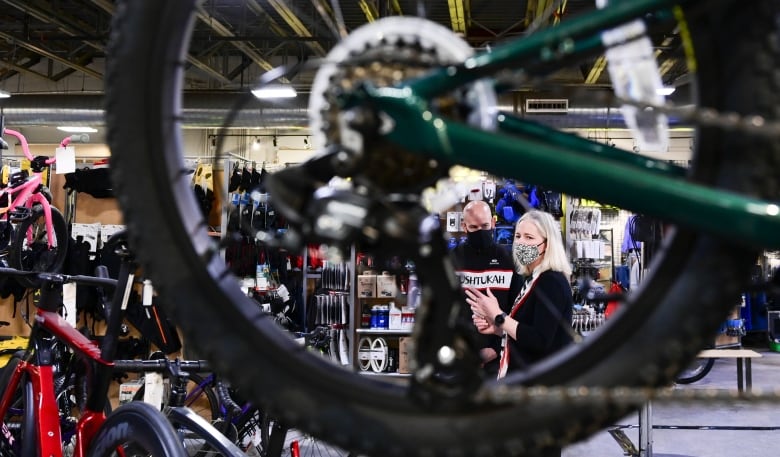 Some bicycle shops across Canada are so busy with a pandemic-triggered boom in sales and its subsequent backlog that even answering phone calls is a struggle.

At Sidesaddle Bike Shop in Vancouver, the message when a customer calls warns that the store gets more than 400 inquiries a day.

“We actually don’t even bother trying to answer the phone, which sounds like terrible customer service, but it’s just we can’t spread ourselves that thin,” owner Andrea Smith said.

Curbside Cycle in Toronto sent out an email to customers on Thursday with a plea to stop calling or emailing when waiting on a pre-sold bike.

“We need to be blunt: If you cannot be patient, then it is better you get a refund this year and wait until 2022,” the email said.

Things are pedal to the metal all over the country. Whether it’s Calgary, Toronto or Halifax, bike shops are slammed, with a surge that started in March 2020 and has not let up — and a backlog that some experts say won’t be cleared up for months or even years.

Bicycles provide an outdoor activity at a time when COVID-19 travel bans and lockdowns have made staying indoors either suffocating or dangerous. Health officials have recommended outdoor activities, such as cycling, and warned of the dangers of coronavirus transmission in gyms and on public transit.

That’s provided a surge in demand for bikes. Market research firm NPD Group says Canadian numbers aren’t tracked, but in the United States, sales of bicycles increased 75 per cent in 2020 compared with a year earlier. For the first two months of 2021, the increase year over year was 130 per cent.

But there’s also a supply-side problem, including a shortage of shipping containers and understaffing along parts of the supply chain due to physical distancing to prevent the spread of the coronavirus.

‘It’s pretty zany when we open’

It all adds up to an unprecedented time for Canadian cycle shops.

Smith said she expects simpler bikes, like those sought by people looking for their first bicycle as an adult, to be sold out by May or June.

As for parts, she said one snag can block delivery for a whole shipment of bikes.

“We have one shipment that’s waiting entirely on left front brake levers,” Smith said, adding that it means someone who wants a custom bike might have to wait until October.

On the production side, David Régnier-Bourque of Cycles Devinci, in Chicoutimi, Que., said the past year has been “very chaotic.”

Régnier-Bourque is the business development director with the company, which produces aluminum bike frames and also imports frames from partners worldwide. He said it takes about 150 parts to make a bicycle.

“It was definitely a huge challenge for us to source parts…. Definitely we were not able to produce at the level we would want.”

Régnier-Bourque said the market is not slowing down, and companies in Asia where parts are sourced will need to increase their production or even build new factories.

“So for the next 12 months, I don’t think that the bicycle industry is going to be able to catch up with the demand. And in more than 12 months, we’ll have to re-evaluate if the demand is as high as right now.”

He said he expects that increased demand will mean a price hike of between five and 15 per cent.

While the demand has left many people in the industry swamped, it’s also left many shops exposed as their inventory dries up, with stores nearly empty and no steady arrival of new bikes.

Gordon Robb, who owns MetroCycle in Toronto, said that as early as midsummer last year, he had an almost empty shop. The typical six-month turnaround for orders has ballooned to 14 months, he said.

MetroCycle has received only about 20 per cent of the bicycles it’s ordered this year, and Robb said he’s concerned about the typical customer who comes in looking for bikes with no interest in pre-ordering.

“It is a little unsettling and I am a little worried, but I think we’re going to be OK,” he said. “We just have to kind of hold on.”

Spring 2023 until things return to normal

Edward Wright, vice-president for parts and accessories distributor HLC Canada, said the industry and consumers will be dealing with the turmoil caused by the pandemic for years to come.

He said he’s “fairly confident” that this time next year, a cycle shopper will have more options than they do now.

But Wright said it won’t be until the spring of 2023 “when you’d walk into a shop and experience what you would have experienced in spring 2020” — a choice of many different models and a two-week wait to get your bicycle repaired.