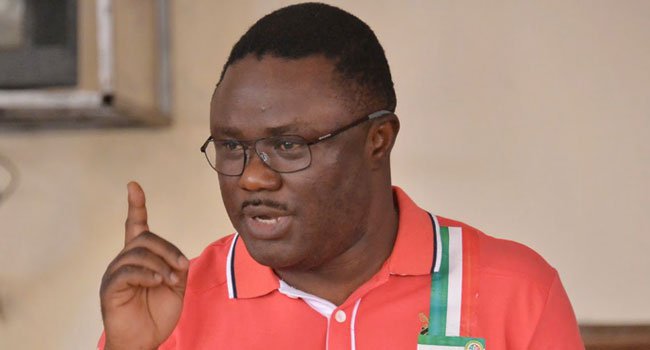 Governor Ben Ayade of Cross River State has said that his government will implement the N30, 000 minimum wage immediately president Buhari puts his signature to the bill.

He stated this on Tuesday in Calabar while receiving some aggrieved workers in his office. Governor Ayade said that the statewide rally by workers was justified as workers needed the new minimum wage.

The Governor who was represented by the Commissioner for Local Government Affairs, Hon John Olafor said, “The State will pay the minimum wage. It is the right of the workers to demand for the new wage of N30, 000.

“N30, 000 is just alright and as such, we will ensure that any step you take on the realisation of this very timely demand is achieved,” he stated.

Earlier, the Chairman of the Nigeria Labour Congress, Comrade John Ushie regretted that the tripartite committee on the National minimum wage, comprising the government and organized private sector concluded its work and submitted the report with a draft bill to President Buhari on November 6th, 2018 but nothing had been done.

“Six governors were members of the committee that worked out the new wage which implies that the report and draft bill were the collective efforts of the broadest spectrum of all concerned parties and this should command the support of every governor”, he said.

The NLC Chairman said, “The Nigerian worker as voters will indeed take their fate to the polling stations and indicate in the ballot their views on the faithful implementation of the new minimum wage by the executive before the polls.

“Emphatically, the Nigerian workers, family, friends and allies may not vote for any candidate in the forthcoming elections who hesitate or refuses to commit to the new national minimum wage of N30, 000.

“It is important to stress that the fate of the new national minimum wage will largely determine the electoral preference of Nigerian Workers in 2019,” he said.

The sensitization rally took the cross-section of Nigerian workers round major streets in Calabar, causing gridlock in some roads in Calabar metropolis.