Government missed out on an offer of N95 masks at the start of the pandemic: documents 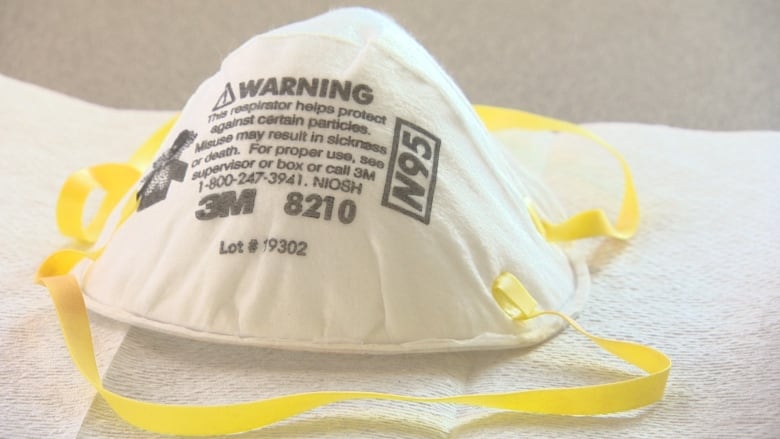 Documents tabled with the House of Commons health committee show the federal government missed an opportunity to purchase critical pandemic-related supplies at the outset of the COVID-19 pandemic — scarce personal protective equipment (PPE) that medical professionals scrambled to obtain in the weeks that followed.

CBC News has reviewed thousands of pages of internal government documents that have been turned over to MPs on the committee, which is probing Canada’s pandemic response to this point.

The many emails depict a government grappling with a sudden crisis and the rush to secure the equipment the country needed as it faced down the surging pandemic.

Thousands of businesses came forward with offers to supply PPE like masks, gloves and gowns, flooding the inboxes of MPs and political staff — people who don’t normally handle the finer details of procurement.

That was the context when the government of Canada rejected an offer from Honeywell, a major U.S. industrial conglomerate, to supply N95 masks to protect health workers on the front line. N95 respirators are designed and fitted to filter out the smallest airborne particles.

The emails reveal the government struggled to respond to an onslaught of correspondence from PPE brokers large and small. To break through, some major firms turned to well-connected lobbyists and government relations professionals to help.

In one email exchange from March 19, Sarah Goldfeder, a lobbyist at Earnscliffe, came forward with an offer from Honeywell.

[Honeywell has] a lot of potential customers coming to them right now, so they will focus on those that are most aggressive about their needs.– Sarah Goldfeder, Earnscliffe

The company — with billions of dollars in revenue and a long track record of producing respiratory masks and protective equipment — was offering a supply of N95 masks just days after Canada initiated an ordered shutdown of social and economic life as COVID-19 caseloads increased.

But the company was punted to an online portal, Goldfeder reported — the government’s Buy and Sell platform. She said an offer of this magnitude needed a personal follow-up, not a generic web-based application for tenders.

“I passed the message along to the company, and the business unit is considering it. But they most likely won’t do it. They won’t do it because they have multiple customers knocking down their (virtual) door,” Goldfeder wrote in an email to senior political officials in the federal Liberal government.

“They are interested in helping and if Canada is in need, I am confident this company would step up — but the portal process is unlikely to be added to their queue. Like I noted above, they have a lot of potential customers coming to them right now, so they will focus on those that are most aggressive about their needs.”

Goldfeder urged Canadian officials to pursue the offer from Honeywell, which had floated the idea of dedicating an entire production line at its Tijuana, Mexico plant to Canada’s needs, just as it had done for the U.S. market days earlier. Honeywell eventually would become a major supplier to the U.S. strategic stockpile.

Goldfeder wrote that sending a major company like this — already overwhelmed by demands from other countries — to a website would leave Canada at the back of the line. She also pointed out that the company had been approved already by Health Canada to sell some of its other products in this country.

“They have a lot of potential customers coming to them right now,” Goldfeder wrote of Honeywell.

‘Right now N95 masks are not the top priority’

Officials appeared reluctant to jump on the offer from a company that — as one Health staffer, Travis Gordon, put it in an email — needed to be “wined and dined.”

“The portal is generally where we’re pushing people, since we don’t have the capacity to be interacting [with] every supplier individually,” Kelly Murdock, a senior policy adviser to Public Services and Procurement Minister Anita Anand, wrote in response.

“Right now, N95 masks are not the top priority. So far they haven’t been as hard to procure as some of the other items on the PHAC order sheet,” Murdock wrote, referring to the Public Health Agency of Canada. She promised to flag Honeywell’s offer to a senior bureaucrat.

Theis wasn’t convinced that ignoring an offer like this from an established company would be in the country’s best interest.

“Totally understand that masks may not be priority, BUT, I do take the point of 1) need to build a stock, and 2) them signing deals with others, which could limit our access if we ended up needing,” he wrote in response to Murdock.

PSPC did not follow through with an order. “Connected with my department … there were initial discussions, but PHAC rejected the Honeywell masks,” Murdock wrote in response.

A government official, speaking on background to CBC News, said that in the early days of the pandemic, the “immediate concern” was procuring other goods that were in short supply.

“I don’t want it to seem like we weren’t prioritizing the masks,” the official said. “The N95 was, at that moment, not the top line priority.”

A spokesperson for Anand referred all questions about Honeywell’s offer to PHAC, which did not respond to a request for comment in time for publication.

Only weeks after the Honeywell offer fell through, the government would be facing a crisis as health care workers came forward with stories of rationing — and reusing — N95 masks because of severe shortages.

Sandy Buchman, the then-president of the Canadian Medical Association (CMA), implored the government to act as his members found themselves routinely facing dangerous situations ill-equipped.

Appearing before a Senate committee meeting back in May, he said physicians were experiencing a tremendous amount of “anxiety” because they didn’t have a reliable and adequate supply of protective equipment.

“We’d never permit a firefighter to go into a burning building without adequate protection. We can’t expect our front line health care workers to put themselves in harm’s way,” he said.

Murdock’s assertion that “N95 masks are not the top priority” for procurement agents suggests a disconnect in government circles in the early days of the pandemic.

As CBC News has reported previously, bureaucrats responsible for the NESS warned in a Feb. 13, 2020 PowerPoint presentation that the federal stockpile contained only “a modest supply of personal protective equipment, including surgical masks, respirators, gloves, gowns and coveralls.”

“We anticipate increased demand and further requests, and also shortages, limits to availability and impacts on the global supply chain. We want to be as ready as possible to meet immediate needs,” the presentation said.

According to documents tabled with the Commons health committee, the first orders for N95 masks of any sort weren’t finalized until March 18 — the day before Goldfeder sent her email with Honeywell’s offer.

Dr. Zain Chagla, an infectious disease physician and an a professor at McMaster University in Hamilton, Ont., said front line workers were grappling with PPE shortages in mid-March.

While much of the country was largely unaware of the supply problem, doctors in southern Ontario had already been treating COVID-19 patients for weeks.

“It wasn’t great telling my colleagues, ‘Reuse that mask for 48 hours,’ or even, ‘Give that mask back and we’ll sterilize,’ but we had to because we just saw the clock slowly ticking down on our supply,” Chagla told CBC News.

Anyone following the situation on the ground knew that N95 masks were in high demand in March, he said.

“It obviously was a priority for us at that point. We were putting masks in the microwave,” he said.

At the end of March, with the supply strains becoming increasingly obvious, Anand would launch a procurement blitz in an effort to shore up Canada’s federal stockpile — which was then supplying every province and territory with the necessary equipment.

“This is all hands on deck,” she said at a March 31 announcement. “Our government is leaving no stone unturned.”

Canada’s principal supplier at the time — another U.S. firm, 3M — would become swamped with requests for its product.

As Anand was making her announcement, concerned doctors were emailing her staff — desperate for an update on orders.

Anatoily Melnichuk is the founder of Toronto-based Safe Direct Medical Supplies, a company he founded with Dragons’ Den star Michele Romanow. He worked with hospitals and dozens of doctor’s offices in the city to secure PPE.

He said in a March email to someone in Anand’s office that he had a lead on more than a million K95 masks — the Chinese version of the U.S.-certified N95 — and he could get them to Canada if the government’s procurement officials acted quickly, but political staff were concerned the K95 variant wouldn’t meet PHAC standards.

Melnichuk said medical professionals were at a breaking point.

“Frankly my only point is this: Currently hospitals have no masks. Nurses are talking and treating patients with surgical masks which offer zero protection from the virus,” Melnichuk wrote in a March 24 email to Caitlin Mullan-Boudreau, the director of operations in Anand’s office.

“Other countries are moving quickly and protecting their nurses and doctors while preventing the spread of the virus. Here we are debating semantics, meanwhile people are naked in battle. For a first world country this is beyond embarrassing, it’s approaching negligence.”

Dr. Hinal Sheth, a family doctor in Etobicoke, Ont., was working with Melnichuk to track down masks at the end of March.

“As it stands now, I have gotten tons of responses from almost every hospital across Canada. All Toronto hospitals are organizing community PPE drives to get donations,” she wrote in an email to another Anand staffer, Dovejoy Parmar.

Steven Page, the president of Stalco, a Toronto-based fulfilment and logistics company, had another lead on masks. A connection of former finance minister Bill Morneau’s, Page said he could bring N95 and K95 masks to Canada quickly — but he was also punted to the Buy and Sell portal.

No one has responded yet but we keep hearing about large government shortages– Steven Page, president of Stalco

“No one has responded yet but we keep hearing about large government shortages,” Page wrote in a March 27 email to Salman Arif, a staffer in Morneau’s office, after waiting days for a response.

“I am confused about this. Is the government short of supply and looking for stock still? And if they are, why are they not contacting potential suppliers?”

“Can someone from your office or dept please give him a call asap! They filled out the submission on PSPC portal and no one got back to them! And this is urgent as the minister will likely follow up,” he wrote in an email, referring to Morneau.

Canada wouldn’t secure a made-in-Canada supply of the crucial masks until early April, when it penned an agreement with Quebec-based Medicom to supply the respirators. The factory started pumping out N95 masks in August.

While supply improved over the spring and summer months, a CMA-commissioned poll from September found the country’s doctors were still struggling with PPE: 54 per cent of respondents said they had challenges when trying to acquire that equipment.

Public Services and Procurement Canada has since purchased 111,667,016 N95 respirators, along with millions of other goods necessary to the fight against COVID-19.